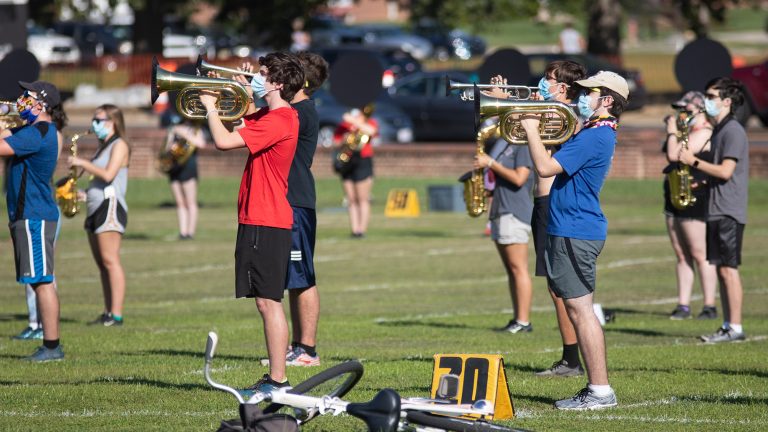 The Mighty Sound of Maryland practices in pods on the Chapel Lawn on Oct. 8, 2020. (Julia Nikhinson/The Diamondback)

When Maryland football returns to play later this month, games will look a bit different due to new safety guidelines put in place amid the coronavirus pandemic. Fans will not be present in the stadiums, and the Mighty Sound of Maryland — the University of Maryland’s marching band that normally performs during halftime — won’t be either.

The Big Ten made the decision to not have bands perform at games, said Mighty Sound of Maryland Band Director Andrea Brown, at least for the beginning of the season.

But this hasn’t stopped the band from practicing.

The band resumed in-person practices on Sept. 15 and is working with the athletics department to create content to play during games, Brown said.

“We’re recording performances at our rehearsals and we’re planning to share those … as a digital format for our fans,” Brown said, adding that tracks played could include Maryland fight songs.

The band meets in person three times a week for a live practice and once a week for virtual classes. Brown said the program is using research conducted by this university and the University of Colorado, Boulder to ensure the safety of all members.

In-person practices are held outside with all members staying at least six feet apart, Brown said. They rehearse in half-hour blocks before clearing the field for about five minutes to let the air flow.

The band groups members in pods of 50 students or fewer, keeping 100 feet between each pod, per Prince George’s County guidelines.

“We can’t really do too much actual marching,” Brown said. “[So we have] pods of people on the field in different places, but within those pods everybody is at least six feet apart.”

Band members are also required to have two masks with them at all times, said Garrett Tatano, a senior electrical engineering major. One mask has a slit in it so band members can wear them while playing their instruments, Tatano said. If a member is not playing, they’re asked to pull the second mask over their instrumental one.

Despite the changes, Tatano says he thinks people are still happy to be a part of the band.

“You know, a lot in 2020 seems like there’s no point to anything,” Tatano said. “Overall, I think people are still enjoying … being able to come together with some of their closest friends. And, you know, feel that sense of a community and have a sense of purpose.”

Maddie Long, a sophomore public policy major and feature twirler for the Mighty Sound of Maryland, said she appreciates how hard the band’s directors have tried to adhere to classic band traditions.

“For returning members, I think they all appreciate it. And we all feel so much that like, it’s the only sense of normalcy kind of that we still have, is our M Sound family,” Long said.

The band provides a tight-knit community for its members, Brown said, something the staff hopes to be able to continue to provide, whether students are participating in-person or virtually.

“When you talk to [the band members] that’s the thing that always comes up, they feel like it’s a family,” Brown said. “So it was just really important for us to make sure that, you know, even if we weren’t at football games, that we were still creating that experience for the students for the season.”