This database is helping me expand my music taste 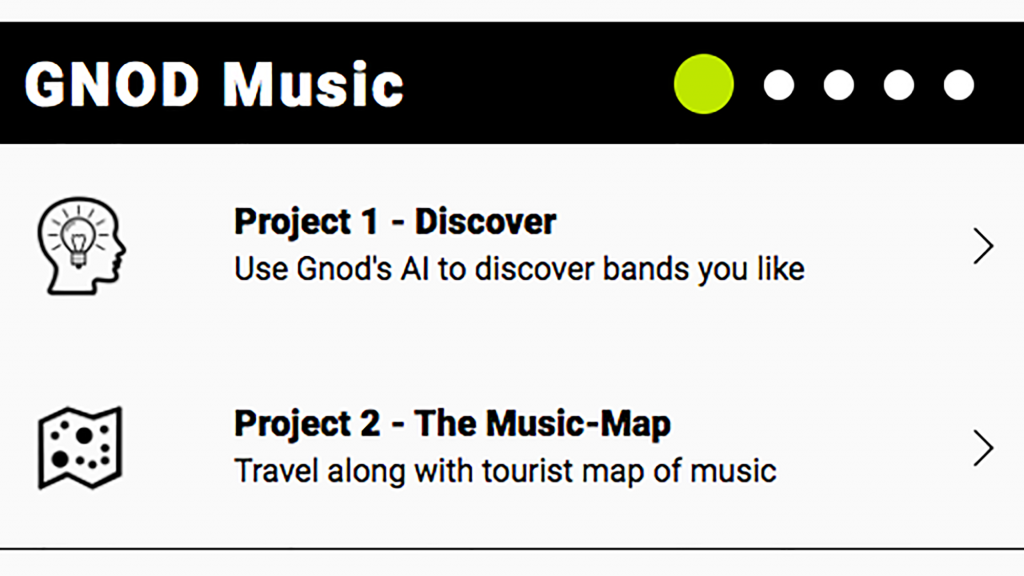 GNOD is a “self-adapting system that learns about the outer world” by asking users about their likes and dislikes. (Screenshot via The Global Network Of Discovery)

Every day, I put on my silly little playlists and do my silly little tasks. And although listening to the same 15 songs every day is fun, I’ve decided to finally branch out and expand my music library using the Global Network of Discovery.

GNOD is a “self-adapting system that learns about the outer world” by asking users about their likes and dislikes. So basically, really badass artificial intelligence. And you can use it for more than just music — there’s also products, art, literature and movies.

I’ve used GNOD before — with the features that let you get single or multiple artist recommendations — and got matched with Surf Curse, which is great because their music was a perfect match with my taste. (My favorite genre of music is rock, usually leaning towards alternative, although I have nothing against classic rock.)

Excited to try out the system again, I chose the regular music option. GNOD asks for your three favorite bands or solo artists, and I put in Bay Faction, Vundabar and Slow Hollows, my three favorites as of late. GNOD recommended Surf Curse, again.

This is where the “self-adapting system” comes into play. Since I’ve listened to a couple of their songs, I clicked “I like it.”

The next recommendation was Yot Club. I clicked shuffle on his Spotify page, and “YKWIM?” came on. It has a very dreamy-sounding piano, similar to Joji. Yot Club’s voice is pitched and lays under the instrumental nicely. There’s minimal production, and it’s very chill, like something I would play on a rainy day.

The next song, “Fly Out West,” is now on my 40-hour-long “cheesy movie soundtrack” playlist — which means I love it. The upbeat drums and the guitar riffs paired with Yot Club’s enunciation reminds me of groovy Vundabar. I can already see myself dancing to this song around my room!

The synth-filled “Spiral Stairs” came on next. I noticed that Yot Club’s music leans closer to electronic. If I had to guess, GNOD was inspired by my bands’ more recent music. All three bands’ discographies started out more rock-y but evolved into more pop rock/alternative pop sounds in their later works.

As a whole, Yot Club was a decently accurate suggestion. I definitely like his songs that lean less on electronic instruments more, but his music is a vibe.

The next recommended artist was Mac the Knife, and GNOD included a song! “Wasteland” got my attention less than a minute in. The band is Australian, and it’s very interesting to hear the lead singer sing with his accent. They call themselves grunge pop, which I can hear in the distortion of the guitar. Another great recommendation.

Next, I tried out GNOD’s music map. I’ve tried it before but never taken the recommendations because it looked too daunting. But the time finally came for me to take up the challenge.

For the map, you can only enter one artist. “Hot & Informed” by rock band Glocca Morra won’t leave my brain, so I put them in. The two closest bands were Nouns and Summer Vacation.

Nouns only had one of their projects, still bummed, on Spotify. The first song I heard was “conch,” and it reminded me of Glocca Morra because of the singer’s screamy tone, but they use a lot of synths which is where the two differ.

Nouns’ song “yaw” is nice because of its spaced-out guitar strums in the first half. The song isn’t afraid to sit with itself and let the listener breathe it all in.

“dogs” has a slow intro, but changes pace nearly halfway through. The distorted vocals work well for this track. The Mario-esque synths have made a return, and I couldn’t be happier. Overall, I like Nouns’ music — they’re like a weird mixture of grunge and electronica.

Ironically, “Last Summer” by Summer Vacation was the first song of theirs I heard, and I’m in love. It reminds me of the pure energy of mid-2000s punk. The next song, “It’s My Birthday” is actually off a collaboration EP with Glocca Morra. Halfway through, the song’s tempo and guitar pattern speed up, complementing the singer’s gritty voice well. “Not That” has an upbeat screamy quality to it as well — very Glocca Morra!

I think Summer Vacation is more similar to Glocca Morra than Nouns, but I still enjoyed both bands.

GNOD did not let me down. What’s so great about this database is that the more people use it, the more accurate it gets. I encourage any art consumers to use GNOD to find something new. The database has everything and most likely won’t let you down. And if it does, just tell it, and it’ll fix itself!