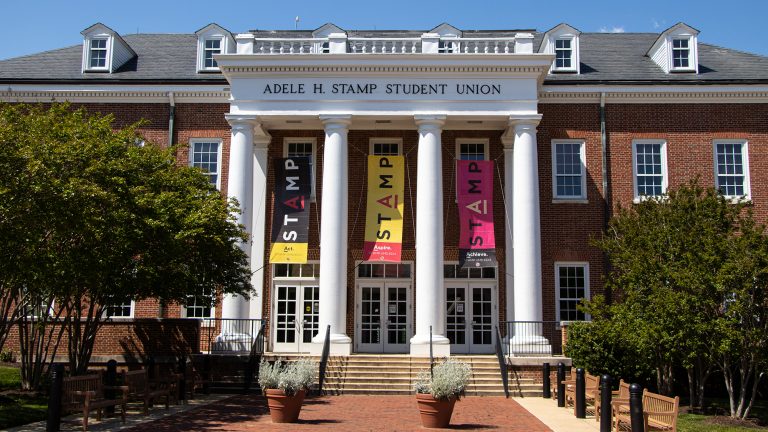 The Stamp Student Union on May 15, 2020. (Julia Nikhinson/The Diamondback)

The University of Maryland has hired a coordinator for immigrant and undocumented student life, the school’s Undocumented Student Program announced Monday. The position is the first of its kind after a similar position was left vacant over the summer.

Rocío Fregoso-Mota, who currently works as a student affairs coordinator within the university’s public policy school, will officially assume the position Oct. 12.

“Rocío’s experience building community with immigrant and undocumented students and her desire to advocate for financial and career opportunities for students make her an ideal fit in the Program Coordinator role,” the Undocumented Student Program staff wrote in an email.

Fregoso-Mota, a first-generation Mexican American with a mixed-status family, was raised in Reading, Pennsylvania, a city with a large population of immigrants. She received her bachelor’s degree in law and society and a minor in biopsychology from Thomas Jefferson University.

She then did a year of service in Los Angeles before returning to Pennsylvania to work at Alvernia University in undergraduate admissions. While there, she advocated for students protected by the Deferred Action for Childhood Arrivals program, calling for changed admissions policies and expanded scholarship opportunities, according to the statement.

Fregoso-Mota helped establish a group called the Greater Reading Immigration Project in her home town. The organization raises awareness about immigration, education and citizenship issues in the area.

Later, Fregoso-Mota became a senior admissions counselor for Latinx students, as well as students under the DACA program, at Catholic University. During her time there, she helped create a dual enrollment program for first-generation students in Washington, D.C.

Fregoso-Mota’s appointment comes after former undocumented student coordinator Laura Bohorquez Garcia rejected a contract in February that would have expanded the position to serve immigrant, first-generation and transfer students. In March, however, after receiving backlash from students, the university separated the duties and created a permanent coordinator position dedicated solely to immigrant and undocumented student life.

Students at this university had been fighting for about three years to make the undocumented student coordinator position — which used to rely on an annual renewal — permanent.

The Undocumented Student Program will hold a virtual meet-and-greet event with Fregoso-Mota from 3 to 5 p.m. on Oct. 12.