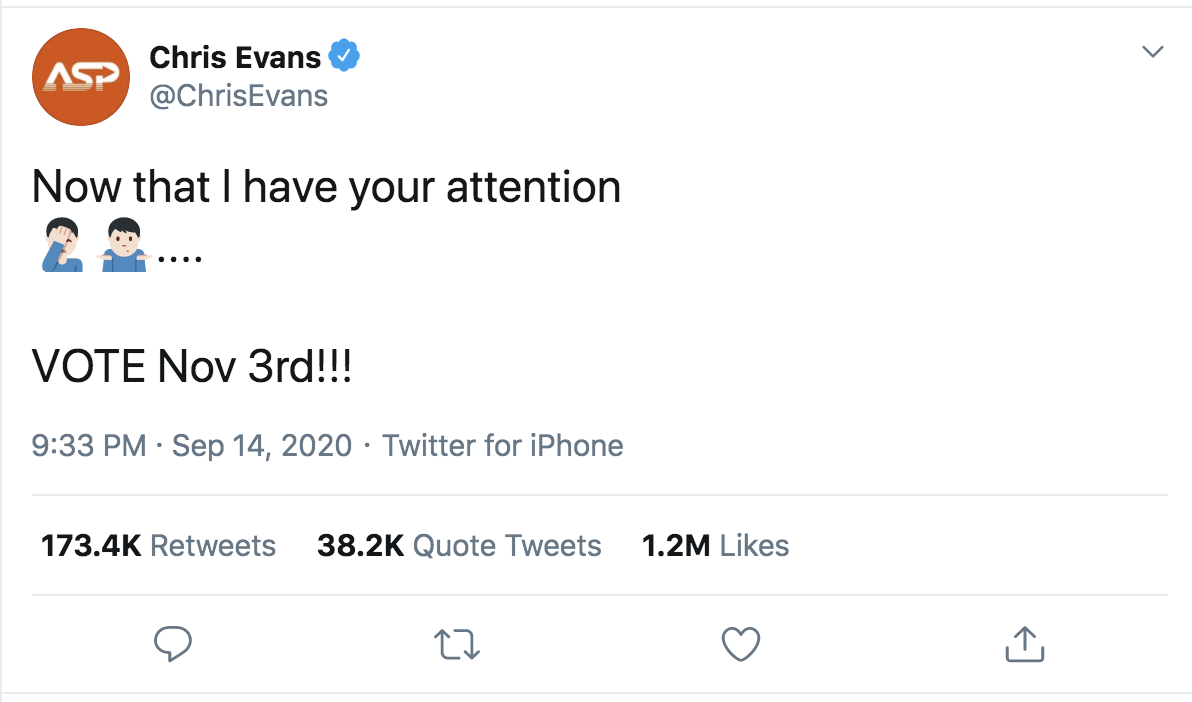 In case you missed it — and it’s unlikely that you did — Chris Evans accidentally leaked a nude photo of what appeared to be himself last weekend. He deleted it, and while screenshots inevitably began to circulate the internet, fans and Mark Ruffalo alike came to his support, flooding the “ChrisEvans” hashtag with wholesome dog pictures. Evans put the entire ordeal to rest by encouraging people to vote, shifting attention to his new civic engagement website, A Starting Point. It couldn’t have gone over better, to the point that I’m still not totally convinced this wasn’t a coordinated effort by Rock The Vote to drum up youth civic engagement now that the art of the celebrity-studded benefit concert has become temporarily obsolete due to the ongoing pandemic.

“You know, things happen. It’s embarrassing but you gotta roll with the punches. I will say, I have some pretty fantastic fans who really came to my support. That was really, really nice,” Evans said in an interview with Tamron Hall a few days later. For a lewd photo, the entire incident felt refreshingly innocuous. With some exceptions, the general sentiment seemed to be to respect Evans’ privacy and not seek out the photo — hopefully an indication that our culture is advancing away from, and not toward, the toxic media fog that surrounds our celebrities.

[Review: You should find the time to go see ‘Tenet’]

So then why, while watching this entire thing play out, was any respect or relief over the cultural response overwhelmed by a sick feeling inside me? A lurch in my stomach and tightness in my throat?

The same day Chris Evans spoke with Hall about the situation, a piece by model Emily Ratajkowski was published in The Cut about dealing with the loss of ownership of her own body in the wake of, among other things, the iCloud hacking incident where her nudes were leaked.

“Photos taken out of trust and intimacy … were now being manically shared and discussed on online forums and rated ‘hot’ or ‘not,’” she wrote. “I’d lost ten pounds in five days and a chunk of hair fell out a week later, leaving a perfectly round circle of white skin on the back of my head.”

[What the world will miss after ‘Keeping Up With the Kardashians’]

I don’t presume to know how much Evans was actually impacted by his personal photo going public. Perhaps he was downplaying it. And in his case, the leak was a self-inflicted accident. In that sense, it’s possible there wasn’t the same profound breach of privacy the victims in that iCloud hack dealt with. Moreover, I genuinely believe society is progressing in these matters, and even if it’s not, there are quite literally bigger fires to deal with right now. However, the fundamental double-standard here couldn’t be more obvious if it were underlined and highlighted. The same culture that gave Evans the luxury to casually joke, “Did something happen this weekend?” in his interview with Hall is the one that left Ratajkowski, by her own description, “destroyed.”

And her case is the rule, not the exception. Before Ratajkowski, there was Vanessa Hudgens, who at 18 had her nudes stolen and leaked. At the time, she issued an apology, but she later stated she was “traumatized” by the entire incident. Disney, which she was working with at the time, has never apologized for calling it a “lapse of judgement” and hoping that “she learned a valuable lesson.”

Then there was Janet Jackson, who was performing with Justin Timberlake during the 2004 Super Bowl when — in a wardrobe malfunction dubbed “Nipplegate” (I mean!) — Timberlake accidentally exposed her breast to the audience and cameras. Timberlake distanced himself from Jackson after that, and only years later did he admit he mishandled the situation, while Jackson’s career took a hit and “never recovered” from the incident.

And take Jennifer Lawrence, another victim of the 2014 iCloud hack. In a Vanity Fair profile that fall, she spoke about being terrified over how the leak would affect her career — how not even Hunger Games kind of money was worth having to call her dad and tell him what happened. In a follow-up interview, she spoke about feeling like an “imposter” after being told she was a “good role model for girls.” More than three years after the hacking, Lawrence stated that she was “still actually processing” it.

Each of these women’s reflections on coming out the other end of these situations has been poignant and eye-opening and profoundly exhausting. No matter how powerful, I’m so sick of the personal essay. Or rather, the need for it. It’s the psychological pink tax — instead of being charged extra for a duller razor, these women spend their emotional health by paying extra in column inches, therapy sessions and hard-earned inner peace.

I don’t blame anyone in this situation for the narratives that were curated about them. The internet is never just or proportionate, and no matter how you define yourself, your public perception is ultimately out of your control. I just wish the all-knowing, all-powerful proverbial ~society~ would let women roll with the punches, too.