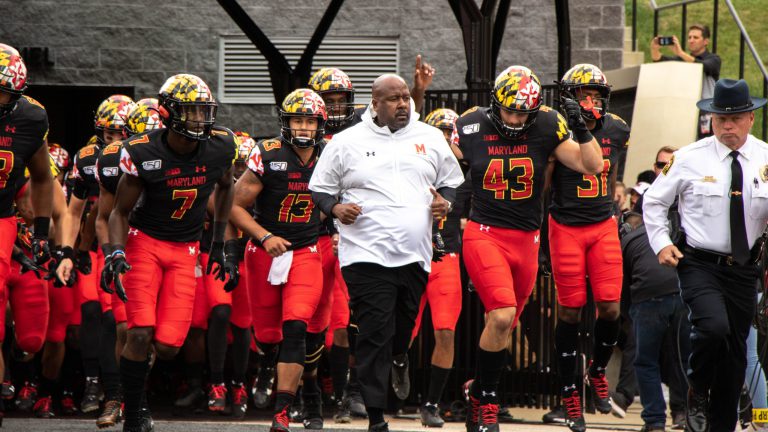 Maryland football head coach Mike Locksley runs on to the field with his team before the Terps' 34-28 loss to Indiana at Maryland Stadium on Oct. 19, 2019. (Julia Nikhinson/The Diamondback)

The season was truncated to nine conference-only games due to the COVID-19 pandemic. In addition to the Wildcats, the Terps will travel to Penn State, Indiana and Michigan and will host Minnesota, Ohio State, Michigan State and Rutgers.

The season’s final game — to be played the weekend of Dec. 19 — will feature a cross-divisional opponent of the same standing, and Maryland won’t know its last foe until the week before. Last season, the Terps would have faced Nebraska in this format as each division’s sixth-place finisher.

The Big Ten fall season was originally postponed Aug. 11, but after a month of negotiating, the conference announced a return-to-play protocol for football on Wednesday.

Players will be given daily rapid antigen testing beginning by Sept. 30 and will undergo cardiac evaluations before and during the season. The Terps will begin play with no fans in attendance at Maryland Stadium.

And while the football team has largely mitigated the virus — head team physician Yvette Rooks said Wednesday the squad had one of the lowest positivity rates on campus, but declined to give a specific number — Maryland athletics as a whole has seen a COVID-19 outbreak in recent weeks. Since testing restarted Aug. 31, 81 Maryland athletes have tested positive for the virus, prompting a temporary shutdown of all practices on Sept. 3. Thirteen teams, including football, have since resumed activities.

The conference will announce return-to-play plans for all other fall sports at a later date.