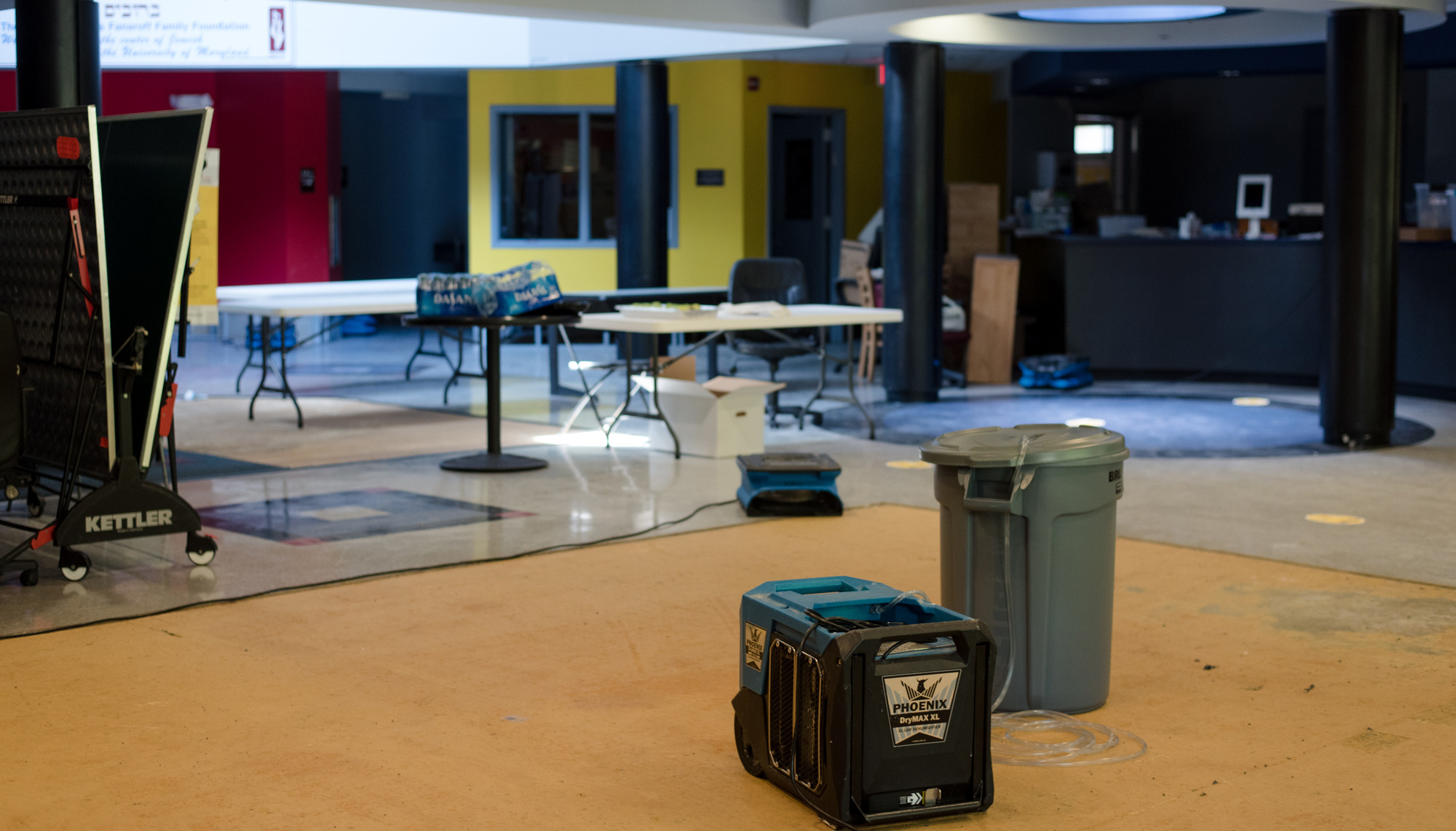 The first floor of Maryland Hillel on Sept. 13, 2020, three days after flooding damaged much of the building. (Gabby Baniqued/The Diamondback)

College Park was pushed inside for the second time in two weeks on Thursday, as pounding rain lashed the streets and thunder cracked overhead. But even as lightning danced against the sky, a procession of University of Maryland students braved the elements to make their way to the school’s Hillel Center.

They had been summoned by WhatsApp messages at about 2:40 p.m.: Hillel was flooding, and the center needed their help.

During the storm, which brought about 3-6 inches of rain and triggered a flash flood warning, water pooled inside the Hillel Center, damaging the facility’s carpets and walls — which is expected to be about $100,000 worth in damages, said MJ Kurs-Lasky, Hillel assistant director. In his six years working at the center, he’s never seen anything like it, he said.

But without the support of about 25 students — who rushed through the storm to help suppress the flow of water outside the building, and pour some of the water out that had already seeped in — Kurs-Lasky said things could have been worse. He said he wasn’t surprised to see so many chip in to help, all sparked by a text message.

“When they heard something was wrong with the Maryland Hillel building, they wanted to jump in and help in any way they could,” Kurs-Lasky said.

When junior computer engineering major Judah Lesser got the text message, he sprang into action, pulling on his raincoat and making a beeline toward Hillel. As he approached the building, he saw water pooling on its right side: In one spot, he said there was about two feet of water lapping against a drain that had stopped draining.

Inside the center, students arrived to help defend the building. As some students squeegeed, others vacuumed. Some stood in about two feet of brown water to unclog the drain outside and others stuffed T-shirts under doors to keep water from flooding in, Lesser said. He hopped in to help lift supplies to higher ground.

“It wasn’t really a decision,” Lesser said. “I felt it was obvious I should go help.”

The space means a lot for students such as Lesser, who serves as the tech chair for Kedma, the Orthodox Jewish community at this university. The center is a place where Kedma, along with many other Jewish student groups, can host events. The building is also where students on kosher dining plans can pick up meals.

Before the pandemic, Lesser said, he’d spend about five or six hours at Hillel in a day.

“[Kedma] is not just a student organization,” he said. “It’s like a lifestyle. It’s a community.”

Eitan Hoffman, a senior biology major, walked over to help at Hillel after tending to water damage in his own apartment. He’s from Houston, he said, so he’s seen flooding at a much higher scale before.

When he got to Hillel, some were maneuvering a wooden board to direct water flow while others were trying other methods. He found an unclaimed shovel to help scoop water out of the main entrance.

“It was sort of like a chain of people,” he said. “Someone else was pushing water towards the entrance, and then I was taking it and then pushing it out.”

Ricki Schlussel, a sophomore psychology major, trekked through the water near Terrapin Row with her roommates as they headed toward the center. At some points, she said, the water was up to her calves. It didn’t take long for the high water to seep into her sneakers.

Inside Hillel, the water was at her ankles, she said. She got busy with a number of tasks, helping to move boxes off the ground, pushing water aside with a mop and using buckets to pour water outside.

“Everybody has a different connection to the Hillel building,” she said. “It was just really cool to see tons of people just show up and help out.”

Following the flood, Elan Burman, Hillel’s Capital Campaign director, launched a GoFundMe to cover the damages. By Sunday afternoon, the campaign had raised more than $35,000, with over 200 donors.

Rabbi Ari Israel, Hillel’s executive director, penned the letter on the fundraiser’s webpage. Despite the loss, Israel wrote that there was “much to celebrate,” praising the students who had jumped in to help “almost magically,” the center’s board members who had organized restoration services for the facility and the community’s support.

He closed the message with a quote from the Old Testament’s Song of Songs — “Great waters cannot extinguish the love” — and with a little bit from Mr. Rogers, too:

“In times of trouble, look to the helpers!”