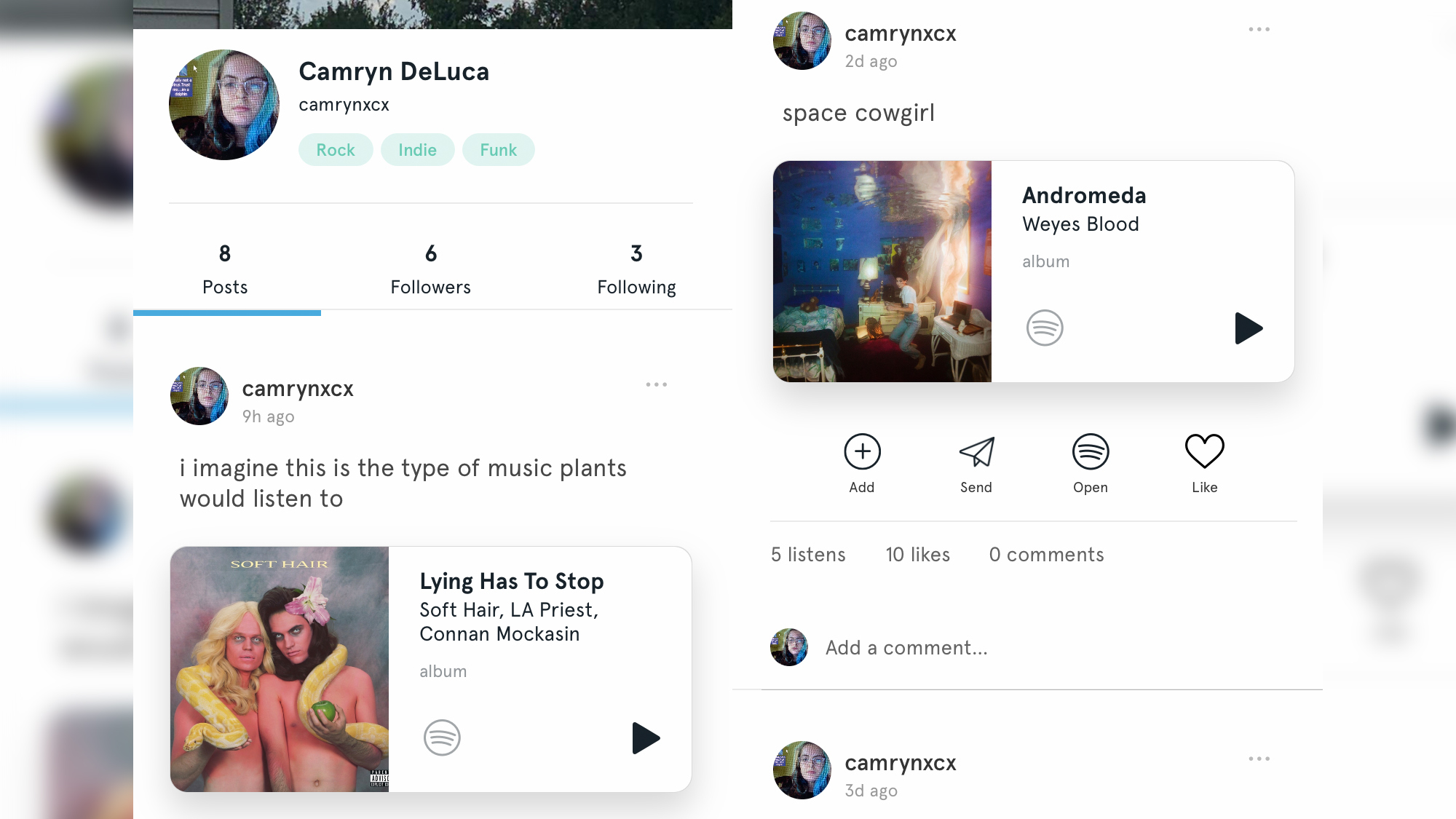 Try out bopdrop if you love sharing the music you listen to. (Graphic by Julia Nikhinson/The Diamondback)

Sharing screenshots of the music you’re listening to in an Instagram story is truly a thankless job. At this point, I recognize that nobody cares! Given the lack of responses I get about my excellent, groundbreaking music taste, I bet most people just tap away to other stories they aren’t emotionally invested in.

I thought cultivating a social media following who cared about the music I loved was a lost cause. But then, I discovered bopdrop — a platform that allows me to accomplish just that.

In the simplest terms, the app bopdrop is just Instagram for the music you listen to. Users can share one song a day and see what others are listening to on an explore feed.

In the divisive Apple Music versus Spotify debate, I’m a staunch supporter of Spotify. But even if you don’t feel the same, the streaming service’s presence on bopdrop isn’t that noticeable. If you use Spotify to connect to the Chicago-based app, you can add any songs you discover to a special “bopdrop” playlist on your account, but you don’t even have to link a Spotify account — the only feature you’ll miss out on is the ability to add songs to that playlist.

I admire bopdrop’s no-frills setup. With the same font as Spotify and a teal, seafoam green color scheme not far from that of the streaming service, it feels like a nice spinoff app. Users have the option to see what the people they follow are listening to in a feed. Alternatively, you can switch to the explore tab to see the latest songs posted by random users — a great option for bopdrop rookies like me.

Founded in 2019, bopdrop doesn’t seem to have an enormous user base. This has created a stronger sense of community than what can be achieved on mega apps such as Twitter or Instagram. Twitter is an endless stream of viral memes, devastating news or straight-up garbage takes. Instagram can capitalize on the insecurities of many, including myself. But bopdrop is just a tight-knit feed of people commenting on each other’s favorite music.

Pretty often I’ll get notifications or see usernames of celebrities such as Khloe Kardashian, Tom Felton and Omar Apollo — these aren’t verified accounts, though. It’s the true mark of an app in its early stages — people are snagging the usernames usually taken by the famous.

While it’s clear bopdrop is the new kid on the scene, I’m sure its features will develop as more users join and offer feedback. I’m definitely into the app’s niche focus and its minimalist interface. But the main thing I’d change is its function for previewing music.

Bopdrop offers a 30-second preview of any shared song. This preview is predetermined, taking away users’ ability to highlight a certain portion of a song they’re into. I’ve been dissatisfied with the segment that’s been played for some of the tracks I’ve posted — the best qualities of a song can be missed while an uninspiring bridge or instrumental portion plays instead.

I’d argue that the one-song-per-day limit should be eliminated, but in a time of excessive phone use, I appreciate the restraint. It gives me something to look forward to each day — which may sound sad, but that’s 2020 for you. I’m also a chronic poster, so maybe limits like these are an effective way to hold me back.

I hope bopdrop continues to grow. Out of all the social media I spend too much time on, this new platform appears to be the least toxic. There are no negative tweets or unrealistic body expectations — just music and vibes.