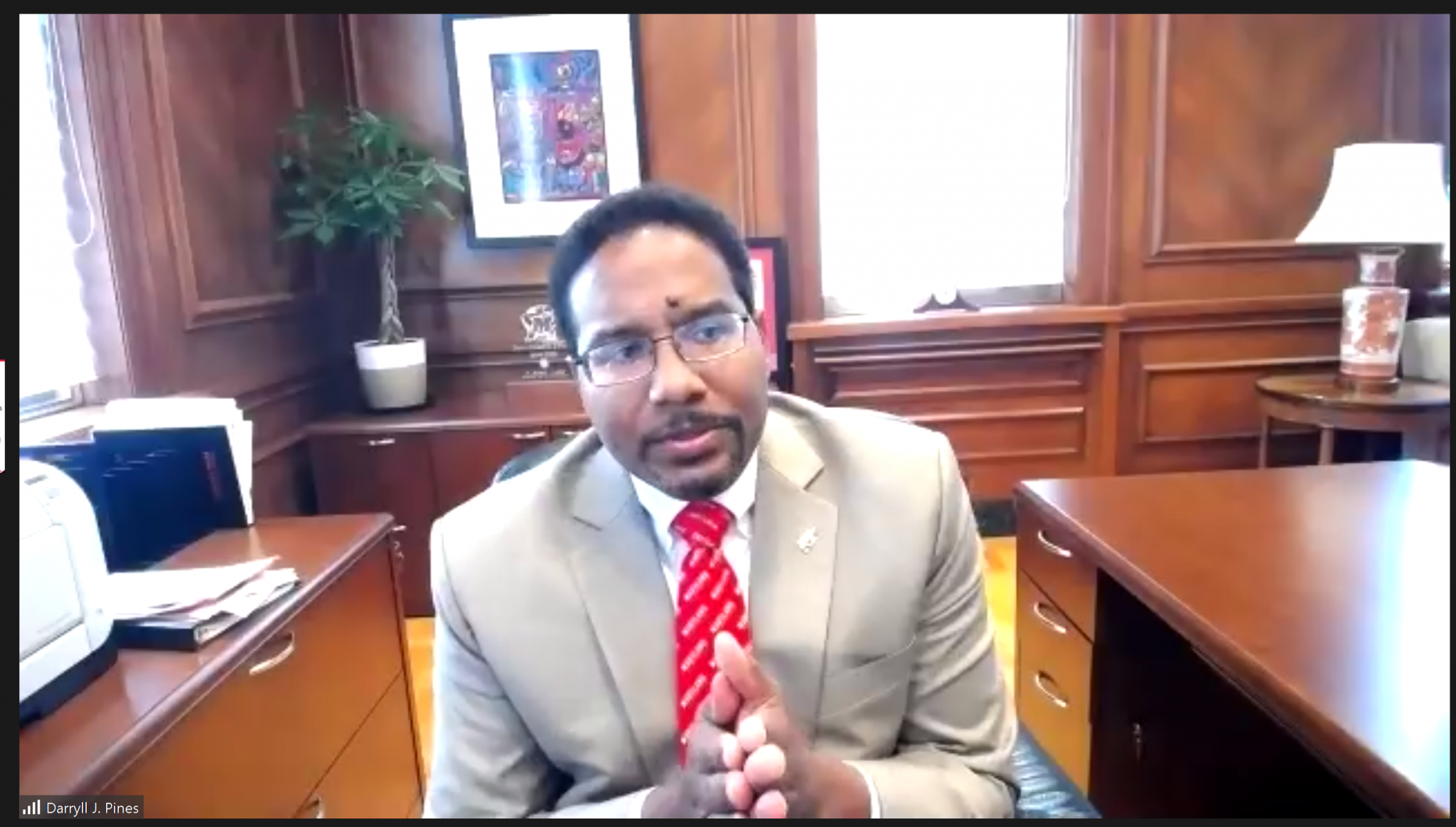 University of Maryland President Darryll Pines gave his first State of the Campus address at the University Senate’s first meeting of the school year Tuesday, addressing how the coronavirus and social injustice — which he calls the two pandemics — have created a need for structural changes on campus.

With the coronavirus pandemic shutting down the university in March, Pines emphasized that one of his administration’s goals is to minimize the number of cases on the campus. But even as he urged the campus community to wear masks and follow social distancing guidelines, he discouraged “confrontation” with those in violation.

His comments come after a university bus driver refused to allow a group of young people without face masks to board a bus. The upset students then threw an object at the bus, breaking one of its windows. The Department of Transportation Services subsequently sent out a statement to its drivers, telling them that the school’s mask policy should only be enforced by campus ambassadors, the Police Auxiliary and College Park code enforcement officers.

The union that represents workers at this university called DOTS’ response “unacceptable,” and the driver was told he would face disciplinary action for his handling of the situation. As of Monday, he had not heard from his supervisors.

A university spokesperson later emailed a statement saying that school officials “fully support our employee who put first the health and safety of everyone on the bus.”

In the meantime, the university’s first week of school saw a jump in positive coronavirus results. Daily positive tests received had been consistently in the single digits for the first two weeks of testing,  until they spiked to 56 on Thursday. Pines attributed part of the increase to 46 student-athletes who he said attended social gatherings and later infected their teammates. As a reprimand, all athletics activities have been suspended indefinitely, Pines said, which he hopes will “send a message.”

There are no imminent plans for the university to move entirely online — as other nearby universities have done — raising concerns from some senate members.

Alok Bhargava, who represents tenured faculty at the public policy school, worried that asymptomatic student carriers of the virus can put higher-risk individuals in danger, especially older faculty and staff.

“The safest strategy would be — like many other universities, especially in the area — just to move everything online,” Bhargava said.

Pines has maintained that the university can still conduct in-person classes, even if it is challenging, and he said the majority of students are in favor of keeping campus open. And if things change, the university is able to adjust accordingly.

“If it’s proven [that we need] to be online by next Monday, we’ll be online next Monday,” Pines said. “But I believe we owe it to our students to give them the best possible experience.”

Meanwhile, the plan to address social injustice is still in discussion with student groups.

Pines has met with students from about 30 Black student organizations to hear the issues they feel the administration needs to address. However, it is up to the organizations themselves, Pines said, to collectively agree on and present a set of demands.

As the administration’s work in social justice moves forward, Pines went on in his address to introduce several initiatives to increase racial awareness on campus, including The 1856 Project. The project, whose name refers to the year the university was established, is meant to reconcile the university’s history with inequality and racism, and it will join the Universities Studying Slavery consortium, which consists of more than 65 colleges worldwide.

“This is part of a reconciliation of understanding our past, so that we can move forward positively for our future,” Pines said.

Alyson Farzard-Phillips, a graduate student representative for the arts and humanities school, commended Pines for his efforts so far. She urged Pines and his leadership team to “respond to students” and “ultimately make the changes that they are suggesting.”

Pines announced last week that the women’s studies department would be named in honor of Harriet Tubman. It is the first department to have an honorific naming in the university’s history. It’s part of a push to address not only anti-Black racism, he said, but all intersections of diversity.

“My commitment towards this agenda will be unwavering,” Pines said. “Unwavering towards improving our campus community and addressing larger issues of social injustice on campus.”