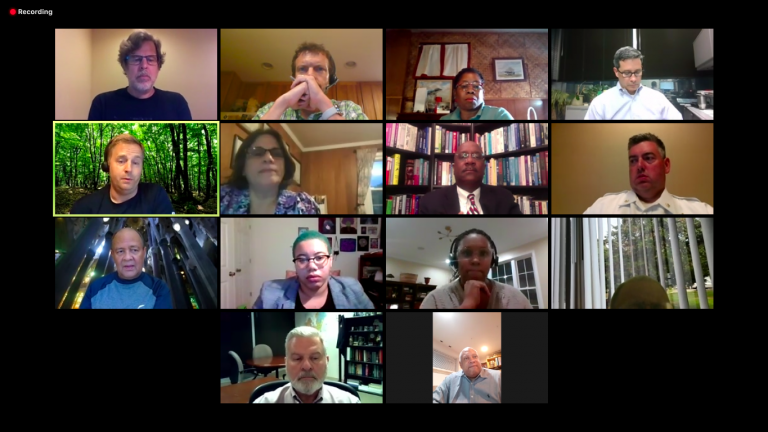 The city of College Park held its fourth virtual town hall on community and race relations over Zoom on Sept. 3, 2020. (Clara Niel/For The Diamondback)

During the meeting, the four-person panel focused on the need for community policing reform and the importance of the Black Lives Matter movement. After unknown attendees spammed the virtual event’s chat with slurs, panelists and city council members felt uncomfortable proceeding with the meeting.

Hosts quickly ended the meeting, and it resumed about 20 minutes later, with the chat box disabled.

Panelist Kim Nickerson, the assistant dean for diversity at the University of Maryland’s behavioral and social sciences college, said that these types of incidents epitomize the need for continued conversations surrounding racial equality.

“We are deluding ourselves if we think [racists] do not still walk among us,” Nickerson said.

District 3 Councilman Robert Day, who is Black, acted as the moderator for the event. He first brought up questions related to the “8 Can’t Wait” campaign — a mission across the United States that seeks police reform in cities nationwide — and the task force that has been working to reform police tactics in Prince George’s County.

Robert Holland, the District 1 commander of the Prince George’s Police Department, said he felt proud that the practices “8 Can’t Wait” pushes had already been implemented years before, including banning chokeholds and engaging in de-escalation methods. The task force was a positive step forward, he added, and he is optimistic that relationships between the police and community will improve.

“I’d just like to see that whatever reforms are put in place allow us to continue building on those relationships that we’ve already established,” Holland said.

Most of the meeting revolved around the Black Lives Matter movement. The phrase began as a hashtag in 2013, after the man who killed Trayvon Martin, an unarmed Black teenager, was acquitted. And with the help of social media, it has since become a platform for people to share their experiences with racism.

For panelist Oscar Barbarin, the movement is not only about police violence against Black individuals — it is also meant to raise consciousness about the systemic racism that exists in everyday life.

“It’s also a statement that the people who are the victims of racism are human,” said Barbarin, a professor and chair of the African American studies department at this university. “They are people who deserve respect.”

Panelist Sika Wheeler, the assistant director of diversity programming and engagement at this university, also noted how the phrase has changed over the course of her life.

Wheeler had just graduated college when Martin was killed. She recalled the resistance she faced when she first adopted the slogan. Now, she sees it everywhere.

“The tone of Black Lives Matter has changed a lot,” Wheeler said.

The phrase, which has become a rallying cry in demonstrations nationwide, represents the American ideal of protesting, Nickerson said. After all, the U.S. was born through protests by the common people, he said.

“I am amazed at the number of people who are arguing that the Black Lives Matter movement is un-American,” Nickerson said.

Another point of discussion was how people not only hold others accountable for racist acts, but how they can hold themselves accountable as well.

This conversation led to attendees sharing their personal experiences: District 3 Councilman John Rigg brought up his own journey of learning accountability, and Wheeler also mentioned how she worked to realize her complicity with anti-Blackness.

“We also have to be willing to talk specifically about anti-Blackness and how it manifests in our communities,” Wheeler said.

Nickerson said it is not enough to only be introspective. It’s important to call out racism as it happens, which is “hard” and may have repercussions.

“To move forward, you must do it. You must do this work. This work is hard. It can be painful, you must do it, but have a support system and educate yourself as well,” Nickerson said.