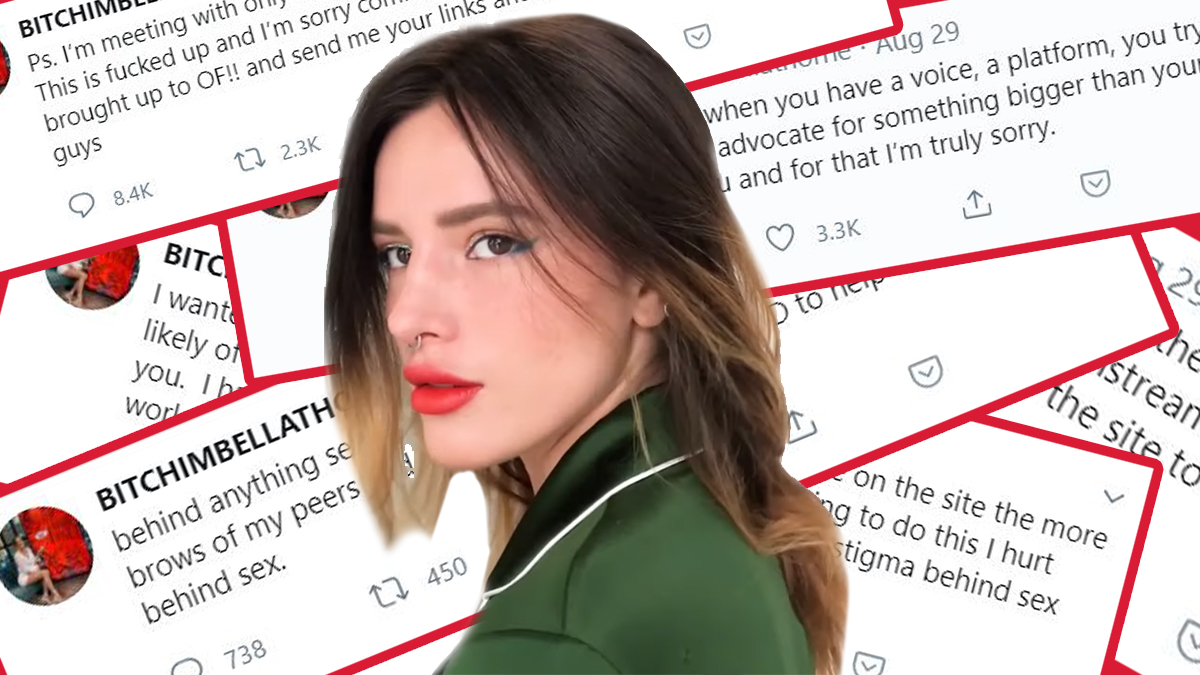 Actress Bella Thorne recently made an OnlyFans account, and people are upset.

OnlyFans is a website where users pay a monthly fee to receive exclusive content from creators, and it’s known for its lenient policies on not-safe-for-work content. Thorne isn’t the first celebrity to jump on the trend of profiting on the platform — Rico Nasty, Blac Chyna, Cardi B and others also have pages — but Thorne’s OnlyFans broke a record. She made $1 million in the first day.

But the majority of sex workers do not make $1 million in a single day. Hours of photoshoots, promoting and building a following from scratch comes with starting a following on any platform. When Thorne made her account, she completely dodged the hoops many sex workers have to go through to be successful.

Because Thorne didn’t start anonymously, her following traveled over to her OnlyFans, and she had an overwhelming head start.Her existence on the platform undermines the hardworking people who rely on OnlyFans subscriptions as their main source of income, especially during quarantine when they have few other ways to make money.

Originally, Thorne said there would be no nudity on her page. But later, she allegedly agreed to post nudity for $200. Thorne has denied these claims and told the Los Angeles Times the screenshots are fake, but Thorne’s critics accuse her of scamming her subscribers.

A huge stereotype sex workers face is that they scam the innocent out of their money. The message Thorne allegedly sent out only put a dent in the trust of sex workers on OnlyFans even more.

Many sex workers and their allies have blamed Thorne for to the changes to OnlyFans that occurred soon after she joined the site, like a $50 cap on pay-to-view content and a $100 tip limit. According to the Times, some of the sex workers on the site have also claimed they now have to wait up to 30 days to receive their funds, when it used to be a much quicker process. Though OnlyFans has said these new policies are not because of “any one user,” these new policies line up with the timeline of Thorne’s alleged post drama.

Thorne’s OnlyFans drama doesn’t end there. News recently spread that Sean Baker, director of Tangerine and The Florida Project, was creating a documentary about Thorne’s experience on OnlyFans.

Thorne told Paper Magazine she’s a “huge fan” of the director’s work and that she has “the same vision of the movie being a conversation starter for many important topics.”

This week, Baker denied these claims in a statement, writing, “I would like to make it clear that the news of me making a film (documentary or fiction narrative) about OnlyFans and using Bella Thorne as research is false. I’m NOT attached to this project.”

In response to the backlash, Thorne created a Twitter thread, where she wrote she wanted to “remove the stigma behind sex, sex work, and the negativity that surrounds the word SEX itself by bringing a mainstream face to it.”

Many of the responses to the thread are angry sex workers who feel like Thorne wronged the profession and industry itself — and they have every right to be mad. Thorne was able to secure a meeting with the company to talk about their new restrictions; meanwhile, those who have used the platform longer than her can’t seem to get an email back. Some just want Thorne to be a better ally. Others said she made sex workers look like “money hungry scammers.”

Later on in the thread, Thorne mentioned how she’s risked her career trying to diminish the stigma of sex, sex work and adult films before mentioning the award-winning adult film that she wrote and directed herself.

While Thorne’s intentions might have been to destigmatize sex and sex work, she needs to realize her goals didn’t play out in reality. For her, a multimillionaire multihyphenate, to hop onto a platform filled with many sex workers whose sole income is that platform, without even trying to uplift them, is shady from the start.

In trying to support people, her actions ended up tearing them down and taking the spotlight away from those who need it the most.

Thorne should acknowledge her mistakes and redistribute her time, energy and funds to sex workers who’ve been affected by her actions. She should talk with professionals on the platform and be open to learning and understanding how she went wrong and where to go from here. And hopefully, by then, she can — with more confidence and correctness — use her privilege to help destigmatize sex work.