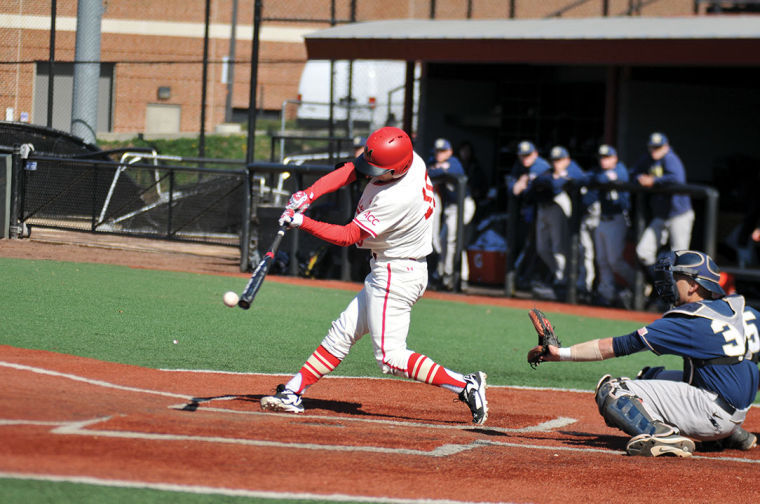 Second baseman Brandon Lowe hits the ball during the Terps' game against Navy in April 2014.

Major League Baseball is more than three weeks into its abbreviated 60-game season, and a couple of Maryland products have already made contributions to their respective clubs. While there are just a handful of Terps currently on major league rosters, with many others belonging to minor league clubs and teams’ summer camp teams, they have undoubtedly been a part of some early important wins in the short sprint of a season.

Here is a look at what three Maryland alums have done for their teams so far in this youthful season.

Brandon Lowe continues to play a crucial role for the Rays in 2020 as he is fresh off his first all-star season in the majors. With a slash line of .309/.382/.676 in 68 at-bats, Lowe is leading his club in hits, and near the top in batting average and on-base plus slugging percentage. The season is still young, but Lowe also is tied for first in the majors in triples with two.

Lowe has also found himself in the spotlight on a couple of occasions in these few weeks, knocking in a clutch hit in a close game and receiving a curtain call from an empty stadium.

In the Rays’ opening series versus the Toronto Blue Jays, Lowe took the game into his hands on two separate occasions. With the score tied at one in the second game of the series, Lowe smoked an off-speed pitch into the gap in right-center field, driving in the go-ahead runs as he cruised into third base with a two-run triple. Although it was no effort of his own, Lowe eventually came home during the next at-bat after Blue Jays’ pitcher Sam Gavigio balked.

Brandon Lowe drives in Hunter Renfroe and Ji-Man Choi on his triple! @RaysBaseball up 3-1!

The following game landed Lowe in a similar position as he came to the plate with bases loaded and his team down a run. This time he grounded the ball just past the first baseman into a shifted infield and slid safely into first base to tie the game and send the Rays to an eventual 6-5 victory in ten innings.

Brandon Lowe goes all out to tie the game pic.twitter.com/JFrPLcBMgi

Adam Kolarek was one of the two Dodgers players who were optioned in compliance with last Thursday’s league-wide shrinkage from 30 to 28-man rosters. He had only pitched out of L.A.’s bullpen four times in the two weeks he spent on the roster, but two of those appearances are penciled down as wins for the Baltimore native.

His very first appearance was on the first night of baseball’s return as he emerged from the bullpen to pitch 1.2 perfect innings against the San Francisco Giants, racking up two strikeouts in the process en route to a win.

Haters said the 3-batter minimum would spell the end for Adam Kolarek so he pulled up and retired 5 batters on 14 pitches last night 🐐🐢 pic.twitter.com/tlSjuBgCwU

His second win of the season took all but two pitches to secure the win against the Houston Astros. Coming in with two runners on base in the midst of a tie game, Kolarek’s second pitch of the night got sent right to Dodgers shortstop Corey Seager’s glove off the bat of Houston’s Josh Reddick.

Overall, Kolarek pitched just 3.1 innings in the 2020 season but did his job to a tee, allowing zero runs and just two hits.

Lamonte Wade was only a part of the Twins 30-man roster for Minnesota’s first three series and only saw action once before he was optioned on August 3. With the Twins having a stacked outfield of Eddie Rosario, Byron Buxton and Max Kepler, there was already a large barrier of entry for Wade to find any playing time.

However, the one occasion Wade did see the diamond was while the Twins were in the middle of blowing out the Chicago White Sox, 13-2. In the eighth inning, the Twins took out some of their premier players such as Josh Donaldson and subbed in a few of their young players, including Wade who came in for Donalson to play the last two innings at first base.