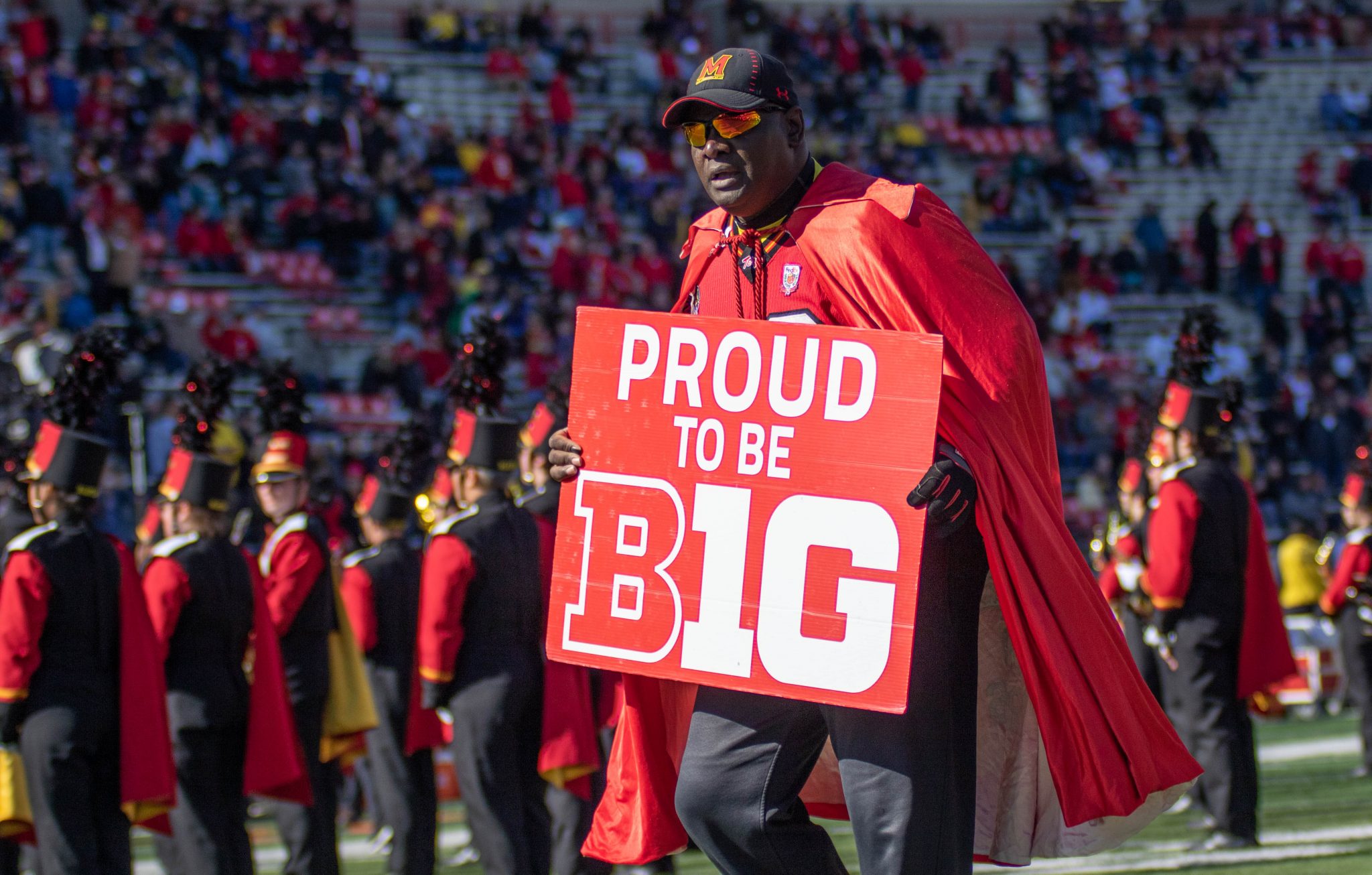 Keith Moore aka Special K brandishes a sign during Maryland football's 38-7 loss to No. 14 Michigan at Capital One Field on Nov. 12, 2019 (Julia Nikhinson/The Diamondback).

Since college sports halted abruptly March 12 due to the coronavirus pandemic, the looming question has been when and how games will resume. In the Big Ten, it will not be anytime soon.

The conference announced Tuesday it postponed fall sports, becoming the first Power Five league to put off athletics until November at the earliest. It left open the option of conducting those seasons — football, men’s and women’s soccer, field hockey, volleyball and men’s and women’s cross country — in the spring.

“The mental and physical health and welfare of our student-athletes has been at the center of every decision we have made regarding the ability to proceed forward,” Big Ten Commissioner Kevin Warren said in a statement. “As time progressed and after hours of discussion with our Big Ten Task Force for Emerging Infectious Diseases and the Big Ten Sports Medicine Committee, it became abundantly clear that there was too much uncertainty regarding potential medical risks to allow our student-athletes to compete this fall.”

The Pac-12 followed shortly after, postponing all athletic competitions through the end of 2020.

There had been some distant hope that athletics would return with relative normalcy this fall, but surging cases of the coronavirus in the past two months made that less and less feasible.

But the Big Ten attempted to persist. It first canceled all non-conference matches for fall sports on July 9. Voluntary football practices went ahead, while other athletes continued to informally work out in small groups.

Schools also began testing their players with mixed results. Maryland athletics has reported 12 positive results for COVID-19 out of 964 tests since it began voluntary workouts June 15, among the fewest cases in the Big Ten across the 11 schools that have reported testing data, as of Tuesday. But other schools struggled to contain the virus — the entire Michigan State and Rutgers football teams had to quarantine at one point after multiple positive tests.

With that cloud hanging over the conference, the Big Ten released a revised, 10-game football schedule Wednesday while suspending the start of all other fall sports until at least Sept. 5. But there were two big caveats: Participation was optional, and the season could grind to a complete stop at any time.

Parts of the return-to-play plan were met with resistance from athletes, as over 1,000 football players signed onto a Players’ Tribune letter demanding stricter safety protocols and greater compensation. Sunday night, a group of players voiced their support for the normal resumption of the season via social media — expressing their desire to play while also hinting at a potentially landmark movement to unionize.

Still, some players have opted to work within the original return-to-play guidelines. Coach Mike Locksley announced Friday that six Terps had opted out of the season, while a seventh — tight end Chig Okonkwo — held out for medical reasons.

Then on Saturday, the Mid-American Conference became the first Division I FBS league to postpone fall sports, and a similar decision from the Big Ten seemed inevitable. Now, with sports halted, a slew of new questions have come into the fold — ones that the conference will confront in the coming months.

“The decision announced today by the Big Ten Conference was made in the best interests of the health, safety and well-being of our student-athletes,” Maryland athletic director Damon Evans said in a statement. “I know that for our student-athletes, returning to campus in the fall is synonymous with the opportunity to compete at the highest level in the sport they love. Not being able to compete this fall is disappointing for all of us, but I have every confidence they will remain resilient and strong in these trying times.”