How former Terps fared in the PLL group stages 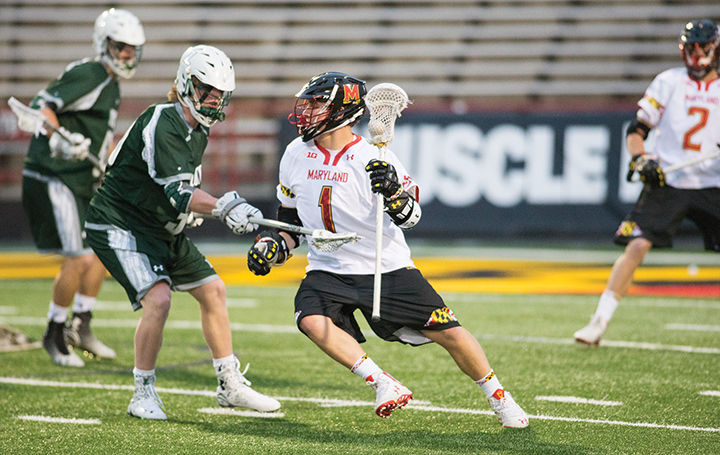 Attackman Matt Rambo turns the corner looking for a clean shot during Maryland's 11-10 win over Loyola at Byrd Stadium on April 8, 2015.

The Premier Lacrosse League Championship Series kicked off last week with seven teams facing off in the group stage ahead of the elimination rounds which begin August 4. With more than 15 former Terps on PLL rosters, we took a look at how they helped their teams during group play.

Curtis Corley: The 2019 First-Team All-Big Ten selection began his second season with the Archers, after registering six ground balls and a caused turnover during the 2019 regular season. So far in 2020, Corley has recorded one ground ball and one caused turnover and has helped lead the Archers to a 3-1 record and the third overall seed in the Championship Series.

We’ve got #ProTerps on all night on @NBCSports ?

Jesse Bernhardt: Bernhardt, who also works as an assistant coach for the Terps, has racked up numbers through four games, pulling in six ground balls and forcing three turnovers. Despite also having three penalties and three turnovers to his own name, Bernhardt has helped the Chrome to secure the second overall seed in the tournament, with their only loss coming in overtime against the Archers on Thursday.

The Men are buzzin’ ⚔️

Joe Walters: The 35-year-old Walters has played well for the Redwoods, registering six points on two goals and three assists. He has shown he can score from anywhere on the field, as he has registered both a one-point and a two-point goal so far during group play. The Redwoods split their games during group play, going 2-2 and securing the fourth seed in the elimination round.

Drew Snider: Snider has done his part so far for the PLL’s new team, recording three goals and four ground balls during group play. While the Waterdogs have only managed one win so far, all three of their losses so far have come by a total of 4 goals. The Waterdogs are currently the fifth seed as the elimination round begins.

Connor Kelly: It was a good couple of days for Kelly during group play, where he recorded seven points on five goals and an assist. Kelly has also recorded four ground balls and a caused turnover, as he has become a key piece of the Waterdogs attack entering the elimination round.

Matt Rambo: Rambo, one of thirteen former Terps on the Whipsnakes, has picked up right where he left off last season, registering a league-leading 21 points on six goals and a league-leading 15 assists during group play. Rambo has been the leader of the Whipsnakes attack, as they have stormed their way to a 4-0 record, the number one overall seed, and a first round bye entering the elimination round on Tuesday.

Bryce Young: Young recorded seven ground balls and forced two turnovers during the group stage, helping lead a defense that has allowed more than 10 goals only once so far.

Tim Muller: Muller collected six ground balls and recorded one forced turnover for the Whipsnakes during group play. Muller has also made an impact on the offensive end, scoring one goal on only one shot taken.

Can we also talk about this photo? @timmuller36 rocked him so hard, his helmet flew off!!!! pic.twitter.com/6fifrNYHFh

Brett Schmidt: Schmidt picked up two ground balls during the group stage, making an impact for the league’s best team so far.

Jay Carlson: Carlson has been a scoring force so far for the Whipsnakes, recording eight points on seven goals and an assist during group play. Having found the back of the net seven times, Carlson is tied for third in the league in goals scored.

Michael Ehrhardt: Ehrhardt has been extremely effective as a longstick midfielder for the Whips so far, picking up 17 ground balls, which is tied for third-best in the league. He has also caused five turnovers and recorded two assists to help round out his play so far.

Zedzilla kept the play alive and it ends with us having the lead thanks to @johnhaus26 ? pic.twitter.com/yXggJH6WQZ

Jake Bernhardt: Bernhardt has made an impact on the defensive side of the ball so far, recording one ground ball and forcing three turnovers during the group stage.

Jeremy Sieverts: Sieverts picked up two ground balls for the Whipsnakes during the group stage.

Mike Chanenchuk: Chanenchuk has been a jack of all trades so far, recording 10 points on three one-point goals, two two-point goals and three assists. He has also recorded three ground balls and forced one turnover.