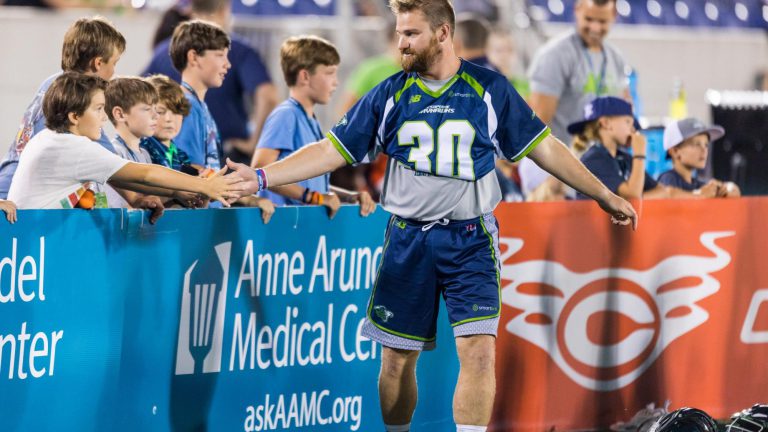 Archbishop Spalding High School boys’ lacrosse wasn’t supposed to win the game. It was 2018, and the Cavaliers were facing an opponent they’d often been on the losing end against.

But when the final buzzer sounded, the squad celebrated a victory, one that dispelled past notions of inferiority in the Maryland Interscholastic Athletic Association — one of the most competitive high school leagues in the country.

After the festivities died down, coach Brian Phipps brought the squad together. He urged level-headedness and warned of the potential dangers of its next game. The win, although significant, had to be kept in perspective. There was still more work to do.

In the eyes of his peers, players and friends, it was a typical moment for Phipps: composed and calm, yet commanding. And it’s that character that has made the Maryland lacrosse alumnus one of the more versatile names in lacrosse, impacting the athletes he coaches, the teammates he plays with and the students he teaches.

“He’s just a great guy, and somebody who looks after his teammates, looks after his family and is always doing whatever’s in the best interests of his team,” Chesapeake Bayhawks midfielder Nick Manis said.

Phipps, an Annapolis native, spent four years as a goalie for Maryland lacrosse, highlighted by All-ACC and All-American nods, while also assuming the role of team captain in his senior year. However, it’s his post-college journey that has established Phipps as more than a reliable presence in the cage.

After graduating from Maryland with a history degree in 2010, Phipps pursued professional lacrosse, starting out as a goaltender for Major League Lacrosse team Chesapeake Bayhawks. He settled into the role between the pipes, tallying 117 saves in 10 games to kick off his first season. Phipps was then acquired by professional newcomers Ohio Machine, where he spent four seasons in Obetz, Ohio establishing himself as one of the best goalies in the sport.

But during his time there, his eyes started to wander.

Phipps had started his time at this university with ambitious goals off the field. He came to College Park with his eyes on a secondary education major and a history minor, looking to become a teacher.

“The student-teaching was tough with the spring sport,” Phipps said. “So I just switched to just being a history major. I always wanted to be a high school teacher-coach.”

In 2014, that dream started to manifest. Phipps was offered the opportunity to shepherd the lacrosse program at Archbishop Spalding, a team that regularly finished in the bottom half of the uber-competitive MIAA, according to Archbishop Spalding athletic director Jeff Parsons.

But Parsons was convinced Phipps was the right man for the job.

“There are a lot of kids that are good, there aren’t many that are great,” Parsons said. “He gets what it takes to be great and can help get them to that level.”

And Phipps settled into a double life, one of a summer demarcated by playing at one of the highest levels of lacrosse in the world — with the rest of the year spent coaching promising students who might get there someday.

For the Cavaliers, Phipps’ presence was a welcome one. He took a talented squad in a competitive division and started turning them into a tough matchup. It was important to the Maryland alumnus that his players embraced both sides of their lives — emphasizing academic quality as well as a high level of performance on the turf. And his experience in the classroom was the perfect model for his ambitions.

“I think the coaching aspect is just teaching lacrosse to players,” Phipps said. “And the classroom is teaching them academics and ways to learn.”

Archbishop Spalding is also home to the Aquinas Program, which offers specialized help and instruction to students with ADHD and other learning disabilities. When Phipps arrived at the school, he took up a role there, tutoring students in American and European History. The job required a balance of instruction and compassion, two traits he had honed both as a coach and player.

“It’s a blast to work with them and see the lightbulb go off,” Phipps said. “It’s a rewarding experience and a rewarding job.”

And he settled into the position with aplomb, quickly developing connections with pupils and helping them overcome obstacles in their educational — and sometimes personal — lives.

“He really keeps that vision a step ahead of what his students need: what they need in the future to be well-rounded,” said Jeanine Kandrac, director of the program and the Learning Resource Center at Archbishop Spalding. “And I see that connection. Students seek him out for help. They seek him out for advice.”

It also provided the perfect link between the field and the classroom. Phipps was able to spend more time among the students. He became aware of the pulse of the school, the vibe of the classes and the day-to-day issues that defined high school life.

“Being in the school and walking around the hallways and knowing the students and whatnot is pretty helpful on the coaching side of things,” Phipps said. “I know my students better.”

As Phipps spent more and more time at the school, the results on the field started to show. By 2018, the team was pushing .500. In 2019, the Cavaliers recorded their first winning season in recent memory. And the 2020 campaign had even more potential, before it was cut short by the COVID-19 pandemic.

Around April every year, balancing teaching, coaching and playing becomes a bit more difficult for Phipps. He might miss a day of work. Practice may be cut short — or rescheduled — as Phipps’ commitments expand and he takes up his third role: representing the Bayhawks for a four-month professional lacrosse season.

In 2016, Phipps moved from the Machine back to his hometown Bayhawks, and his professional lacrosse career took a turn. For one, his performance on the field dramatically improved. In his return season, Phipps played in 14 games, tallying a career-high 216 saves, starting all 14 games in the cage. But more importantly for the Bayhawks squad, Phipps emerged as a leader on a team he knew well.

Though Chesapeake had won back-to-back titles in 2012 and 2013, it endured a playoff drought for the next four years. During a period marked by the growth of the league — one that saw popularity grow nationwide —  the Bayhawks struggled. In 2016, they finished in a seven-way tie for first place, but missed the playoffs due to tiebreaker rules. In 2017, they rallied from a slow start, but still missed out.

But the 2018 season brought change and an opportunity for Phipps to make an impact on and off the field. Head coach Brian Reese left, and the Bayhawks brought in Dave Cottle as his replacement. Cottle, who coached Phipps at Maryland, identified the goalie as a key player and team leader.

“For any team to be successful, you have to have that bridge between the coaching staff and the players,” Bayhawks coach Tom Mariano said. “You can just see the respect they have for him.”

With a new staff and structure in place, the Bayhawks started to improve again. In 2018, they returned to the playoffs — losing narrowly to the Denver Outlaws in the opening round. A year later, though, everything came together, as Chesepeake stormed through the regular season before knocking off Denver to secure its first championship since 2013. Phipps starred in the final, tallying nine saves in a tight 10-9 win.

The professional season requires a lot of coordination from Phipps, like when he takes Sunday night red-eye flights to get back to school to teach on Monday mornings. Or the days he would practice with the Bayhawks, lead a practice for the Cavaliers and also teach throughout the day — with time to fit in an early morning workout.

“Brian’s working out at 6 a.m. before he goes to work. Getting a lift in, showering, going to teach classes,” Mariano said.

And it would have likely been the same this season, had the COVID-19 pandemic not affected the school year. Phipps was able to appear for the Bayhawks, but they struggled in a modified one-week season. Still, Phipps started four of five games, averaging 14 saves per contest.

With the immediate future so uncertain, Phipps stands at a crossroads in his lacrosse career. At 32, he is 10 years older than the Bayhawks’ other goalie, Sam Lucchesi. And although he’s been involved in the U.S. national team setup in the past, Phipps was cut from the competitive squad in 2018.

Either way, Phipps plans to continue playing, teaching and coaching — whatever that may look like in the coming months. While the triad of professions is demanding, it’s just a question of how Phipps can continue to find the balance.