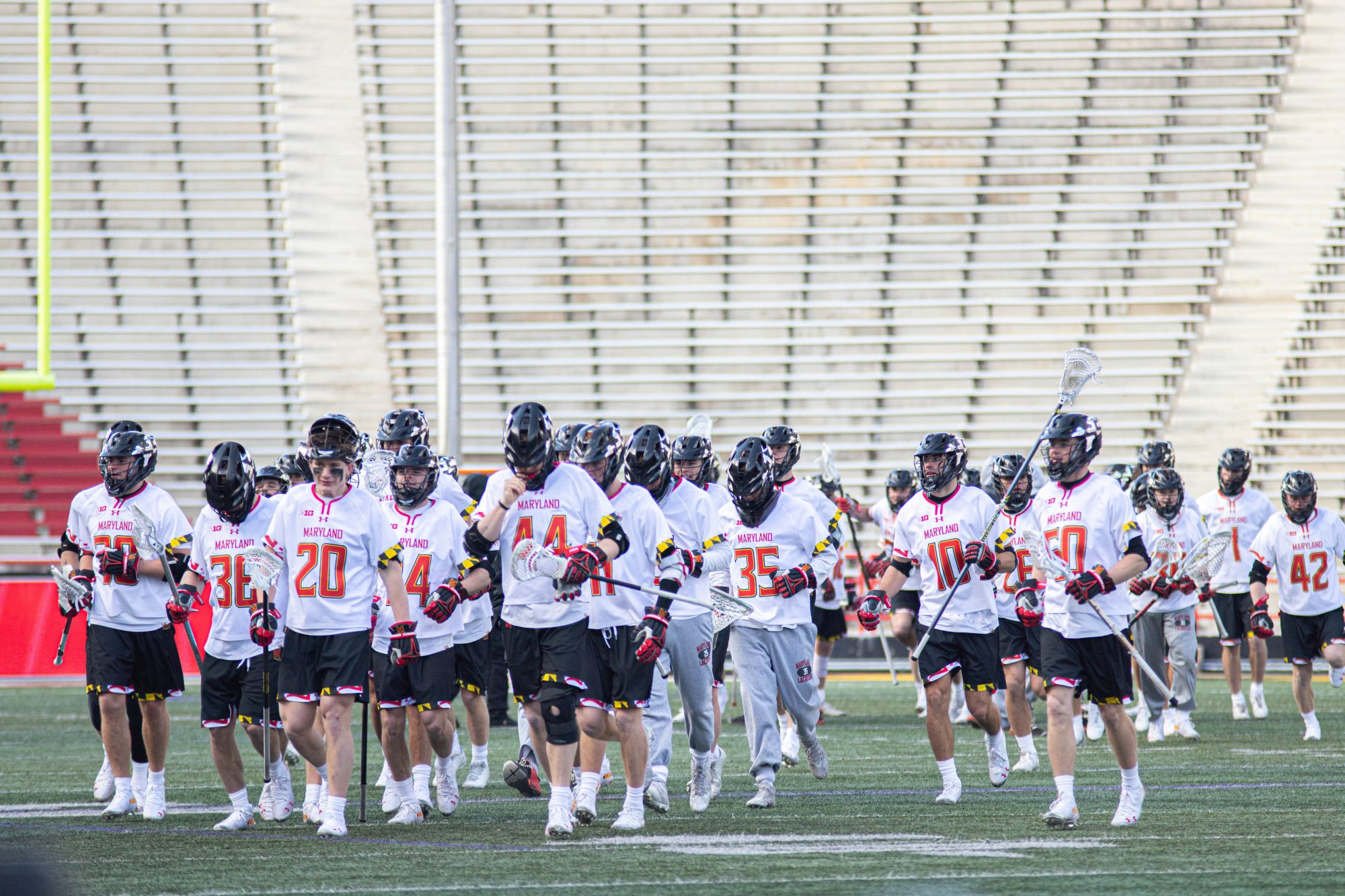 The Maryland men's lacrosse team walks off the field on Feb. 29, when it beat Notre Dame, 14-9. (Julia Nikhinson/The Diamondback)

John Tillman had heard the whispers — whispers that only intensified when sports leagues across the globe began announcing cancellations and suspensions in response to the coronavirus pandemic.

This could all be over soon.

But that was just a rumor at the time, and as the Maryland men’s lacrosse head coach, Tillman had a job to do: prepare his team for a matchup against defending national champions Virginia on March 14.

So, he persisted, spending his days crafting a game plan to limit a sizable Cavaliers’ threat through practices and film sessions. At nights, Tillman used GroupMe to update his players on their status for the rest of the season.

“You start seeing conference basketball tournaments canceled,” Tillman said via conference call Friday morning. “You step back for a second and you’re like, ‘Uh-oh.’”

It all culminated at the end of practice on March 12, Tillman’s squad moshing in a pit of red and white as wind — and rumors about their future — swirled. And within hours, Maryland’s season was over.

But that image of a team united remains, immortalized in a video on Tillman’s Twitter — the lasting memory of a season that promised so much, with a premature ending that left more questions than answers.

“I don’t think anybody has answers right now of which way this is gonna go,” Tillman said. “Because it’s gonna have such a big impact on programs, on athletic departments and universities.”

There are many worse positions to be in, of course. As of Sunday, more than 320,000 people have been infected with coronavirus globally, and nearly 14,500 people have died.

Still, the disruption that has followed in coronavirus’ wake has had a unique effect on collegiate athletics. On March 13, the NCAA announced spring sports athletes who are seniors would retain an extra year of eligibility.

It creates a logjam for many lacrosse programs across the country — including the Terps, already brimming with talent across the board.

And the logistics are even murkier, Tillman said.

“When it comes to an extra year, you’ve got to figure out whether their families can afford the extra year,” Tillman said. “We have scholarship limitations right now, a lot of us have roster limitations, we have locker limitations in our locker rooms. There’s a lot to work through on this.”

Those limitations extend beyond the locker room, too. With academics transitioning online for the remainder of the semester and fall 2020 registration fast approaching, many Terps are poised to reevaluate uncertain scholastic futures.

It’s an especially fragile balance for seniors, many of whom are still mulling postgraduate plans, Tillman said.

“If somebody wanted to try to come back, you’re going to have to work through their academics,” Tillman said. “Some guys may be candidates for graduate school; some guys might not have that profile, so that means you would have to alter their undergrad track.”

For attackman Jared Bernhardt, the question of whether to stay becomes an especially difficult one to map out.

The senior sits fifth all-time on Maryland’s goal-scoring charts, 27 shy of Matt Rambo’s vaunted 155 mark. A healthy season would likely see the Longwood, Florida, native soar to the top of the list — the crowning achievement in a decorated Maryland career that already features a national championship, a first-team All-American nod and the second-highest goal-scoring campaign in program history.

But Bernhardt has also previously voiced his intent to pursue football during his postgraduate year to honor his late father, Jim, who passed away last summer.

Tillman is unsure of the senior’s plans. It’s early in the process, and the uncertainty surrounding the feasibility of a fifth year proves problematic at the moment. Coupled with a global pandemic, one that has kept people in their homes across the globe, it’s a situation that likely won’t be resolved anytime soon.

“I don’t think any of us really know,” Tillman said.

It’s a time of uncertainty for programs across the country, too, the cancellations to their seasons the latest in a string of changes made in a worldwide effort to slow the spread of the coronavirus — one centered on tenets such as social distancing, isolation and quarantining.

And it leaves Tillman’s squad wondering “what if” — the team had started to jell in the weeks following its 13-12 defeat to Villanova on Feb. 18.

Victories against Notre Dame and Albany followed, coinciding with a number of impressive displays from a variety of Terps talents.

Bernhardt and attackman Logan Wisnauskas were prolific, well on pace to smash their 95 combined tallies from the previous season with 44 scores in six games.

And in the faceoff position — an area of need in the offseason — the Terps performed admirably, falling back on assistant coach Tyler Barbarich’s “hog-pen mentality” to ascend up the national rankings in faceoff win percentages.

“I feel like Justin Shockey had a really good year,” Tillman said. “When we used Conor Calderone against Villanova, he played really well. We used Joel Trucksess when we played Richmond … I felt like at the faceoff X, at least until this point, we had performed fairly well.”

But now, Tillman’s squad faces a summer of unknowns. It’s a sobering reality that has struck sports teams across the globe.

The Terps didn’t expect that March 12 practice to be their last, that huddle of madness captured on video to represent their final contributions in the campaign.

Still, in this time of chaos, Tillman opts for a more level-headed approach. The circumstances are inconvenient, of course. Frustrating, even.

But Tillman knows there are far worse out there.