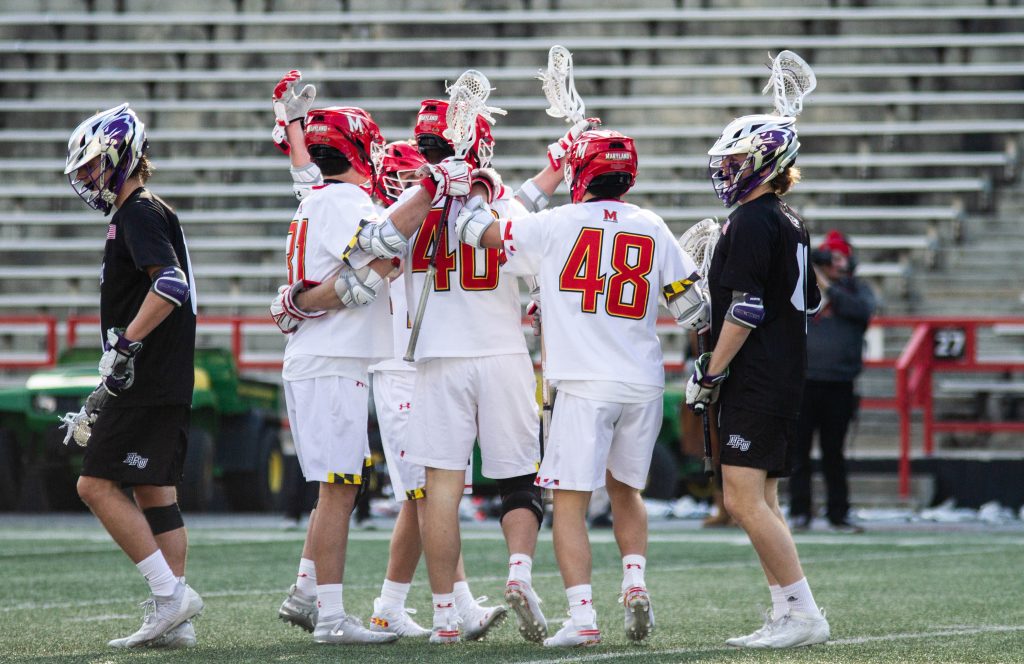 Kyle Brickerd and Tehoka Nanticoke are nothing alike, that much is true.

Nanticoke, the crown jewel of the Albany men’s lacrosse team, weighs in at 248 pounds; approximately 50 pounds heavier than Brickerd. A member of the world-renowned Iroquois Nationals, Nanticoke has racked up 94 goals in 36 games. Brickerd, in contrast, has two goals in 12 career appearances, none of which were starts. Nanticoke’s highlight reel, posted on YouTube a dozen times over, generates hundreds of thousands of views. As for Brickerd, a quick search reveals nothing of interest.

Yet minutes after No. 7 Maryland survived a late Albany rally to defeat the Great Danes, 14-13, there was one name on the mind of defender Brett Makar — the man tasked with limiting Nanticoke’s threat.

For weeks, Brickerd’s value has been defined not by his displays on weekends when the lights are the brightest, but on weekdays, as a scout team dynamo — a player who masquerades as Maryland’s opposition’s biggest attacking force in practices.

And while Brickerd’s role doesn’t show up on the stat sheet or earn the headlines, it’s been central to coach John Tillman’s squad and its progression over the course of the season.

“People don’t dream about being on scout team,” midfielder Roman Puglise said. “But those scout guys accept their role.”

Brickerd’s lacrosse future took shape while at Broad Run in Ashburn, Virginia, his shelves littered with accolades from his youth — Washington Post second-team all-Metro, Potomac Conference Player of the Year, two-time Offensive Player of the Year.

But Maryland’s roster was stacked, pushing Brickerd to the outskirts of the first team as a freshman.

Regardless, Brickerd has taken Tillman’s values to heart, values which permeate throughout Tillman’s squad, whether a star goalscorer or a bench dweller.

“Just coming in and working your butt off every single day,” Puglise said. “Doing it for your teammate, doing it for the program, the people that came before, this great state, this great school — that’s kinda what’s been preached since you’re getting recruited here.”

So, Brickerd’s persisted through it all, carving out a sizeable role on scout team’s attack. And it’s Brickerd’s size — 6-foot-2, 200 pounds — that makes him such an intriguing option, particularly when preparing for Tewaaraton-level attackmen.

Take Maryland’s season-opener against High Point on Feb. 1, a game marked by the battle between Makar and Panthers attackman Asher Nolting, who notched 44 goals last campaign.

In the weeks prior, Brickerd played the role of Nolting in scout team, mimicking his movements as the Terps’ defense looked to get an idea of just how High Point would tee up its two-time SoCon Player of the Year, midfielder Bubba Fairman said.

Once the Terps took the field against the Panthers, it was clear who reigned supreme — Makar shepherded Nolting throughout, holding the Tewaaraton nominee to a single goal.

“[Scout team’s] effort and attitude and being able to put the team first every single week, I think that that’s sometimes not easy and I think they do a great job with that,” attackman Anthony DeMaio said. “That’s definitely something that we value as a program.”

The scout team’s commitment to the overall squad was reflected in Brickerd’s performance in the weeks before, as was the case against Albany. Despite not making an appearance, Brickerd’s presence was crucial to Maryland’s victory — on a day when Nanticoke’s talent shone, but the Terps did just enough to blot it out.

So, while Brickerd and Nanticoke have little in common, Brickerd’s role is still a significant one to the Terps: an understated team player committed to elevating his teammates’ play — whether on the practice field or the sidelines.