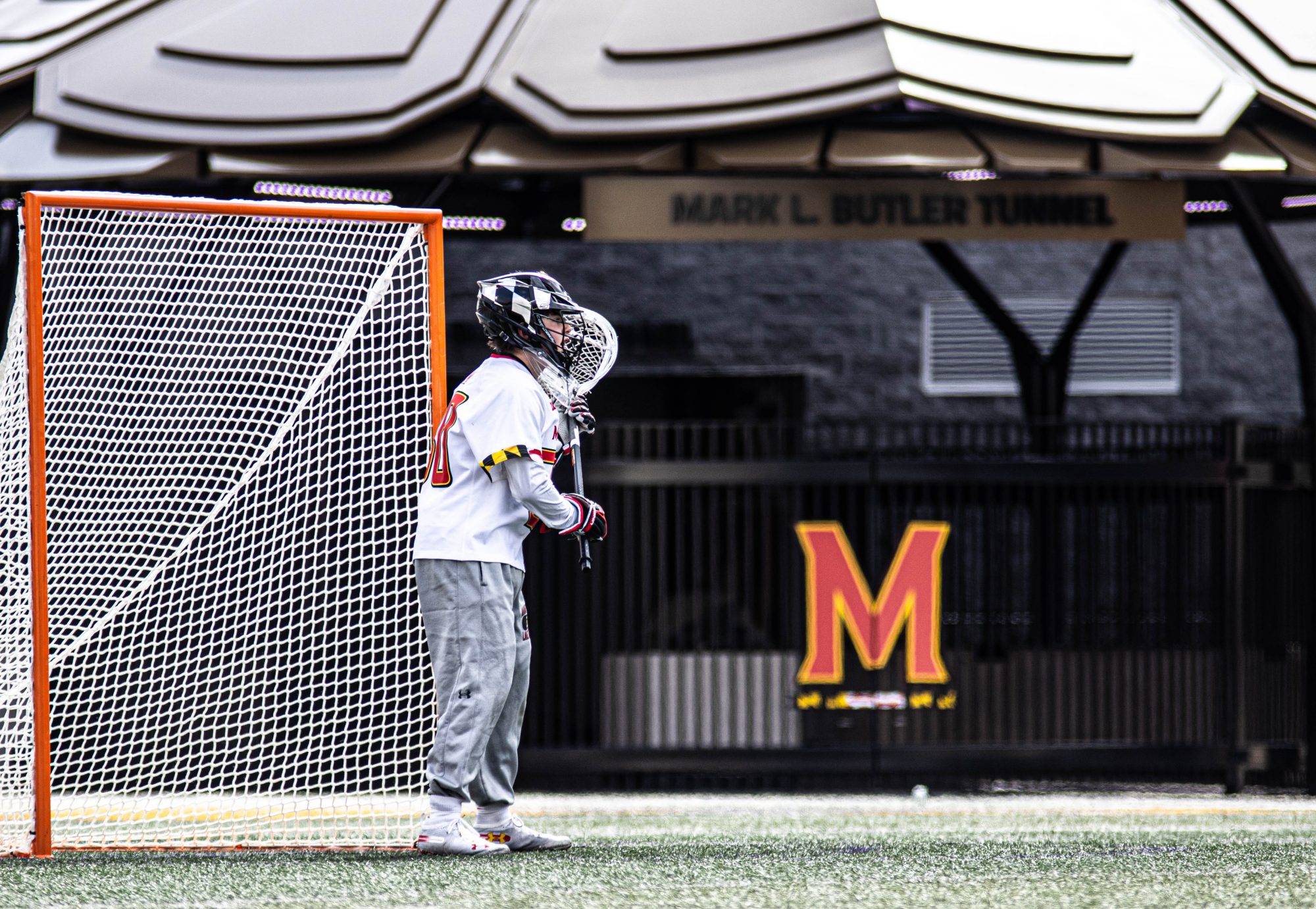 Logan McNaney had likely hoped for an uneventful start to his college career — his Maryland men’s lacrosse teammates recycling possession up the field and scoring goals early and often against Notre Dame as he watched on from his net.

Attackman Wheaton Jackoboice had other ideas, though. With a side-step, Jackoboice was past midfielder Alex Smith, barrelling toward a parting Maryland defense. In a matter of seconds, Jackoboice was near the crease, firing a low shot toward McNaney’s frame and into the ground.

But as Jackoboice’s effort skewed off the grass and toward the bottom-left corner, McNaney got his stick down, deflecting the shot into a corridor of uncertainty — a few players surrounded McNaney as the ball flew around the crease and, eventually, away from danger.

It was McNaney’s first career save, nervier than most. But it was par for course for a freshman netminder who weeks earlier was plying his trade for the scout team, a redshirt season looking more and more likely.

Now, he’s a starter, his rapid ascension pumping energy and excitement into a Maryland team that looked lethargic and unsure of itself a mere two weeks ago.

“We brought up the idea of Logan redshirting and that was the plan,” coach John Tillman said. “But …  looking at the body of work of all of the guys in practice … it just felt like Logan had done a good job.”

Danny Dolan’s graduation left a void in the goalkeeper position, and Tillman and his staff aimed to fill Dolan’s absence in the best way they saw fit: through competition.

McNaney, Chris Brandau, Colin Miller, and Drew Morris engaged in an intense battle for the goalie stick over the preseason, each shot-stopper playing a quarter in a scrimmage against Cornell and the alumni game, respectively.

Come the start of the season, it was Brandau, a transfer, who rose above his peers; whose name featured on lineup cards.

“We came out of the fall feeling that Chris Brandau had a slight lead going into this [season],” Tillman said. “We just felt like — in certain ways — Chris had the advantage.”

For the first three games of the season, Tillman’s decision paid off. Brandau racked up 44 saves and three wins, no performance brighter than his career-high 19-save display in Maryland’s comeback 17-15 victory over then-No. 6 Penn on Feb. 15.

Then the Terps traveled to a winless Villanova squad, a team-wide torpidity sinking Maryland’s unblemished start. And as the rain poured onto the field, the Wildcats poured it on — Brandau’s save percentage dipped below 50 percent.

A 10-day break followed, pushing Tillman and his staff to re-evaluate their lineup in an effort to spark the Terps out of their stupor.

The goalkeeper position was no exception. McNaney, still heavily involved in practices despite plans to redshirt, continued to impress, even as a member of the scout team.

“Looking at the body of work of all the guys in practice,” Tillman said. “We just felt like Logan had done a good job … there were a number of days where we all walked away like ‘Logan’s playing well.’”

There were concerns, of course; at 5-foot-8, McNaney doesn’t strike an imposing presence in the net. Moreover, the freshman had spent the whole of the season untested as a first-team option. Still, McNaney persisted, eventually earning the nod for Saturday’s affair after dazzling in practices.

“He’s a little guy, but he’s got a lot of confidence in himself,” midfielder Roman Puglise said. “He’s never shied away from a big moment, or shied away from someone shooting on him — he takes shots from Jared [Bernhardt] and Logan [Wisnauskas] … every single day.”

McNaney seemed unfettered by the stress and tiredness that gripped Maryland’s performance against the Wildcats, appearing ready to show his talents against a top-five team.

“Logan was really confident this weekend,” faceoff specialist Justin Shockey said. “I thought that was something that was really impressive.”

And McNaney’s confidence soon spilled onto the field, his quick hands and reflexes protecting the net that towered over him.

No moment encapsulated McNaney’s rapid development more than when, early in the third quarter, he stood tall to deny attackman/midfielder Griffin Westlin. And as the ball rolled out of play, McNaney threw a series of punches in glee.

At the time, Maryland clung to a one-goal lead. Aided by McNaney’s antics in goal, the Terps’ exploded, scoring six goals to vanquish the Fighting Irish.

And once McNaney left his post at the final whistle’s behest, his role in the victory was on display for all to see — whether it be Tillman, his teammates, or even Scott Van Pelt.

The longtime ESPN host spoke to Tillman’s squad in the locker room after Saturday. And in the midst of his address, McNaney caught his eye.

In the scrum of laughter that followed, McNaney’s progression was clear — from scout team to starter to being clowned by Scott Van Pelt.

And for McNaney, that pathway will do just fine.