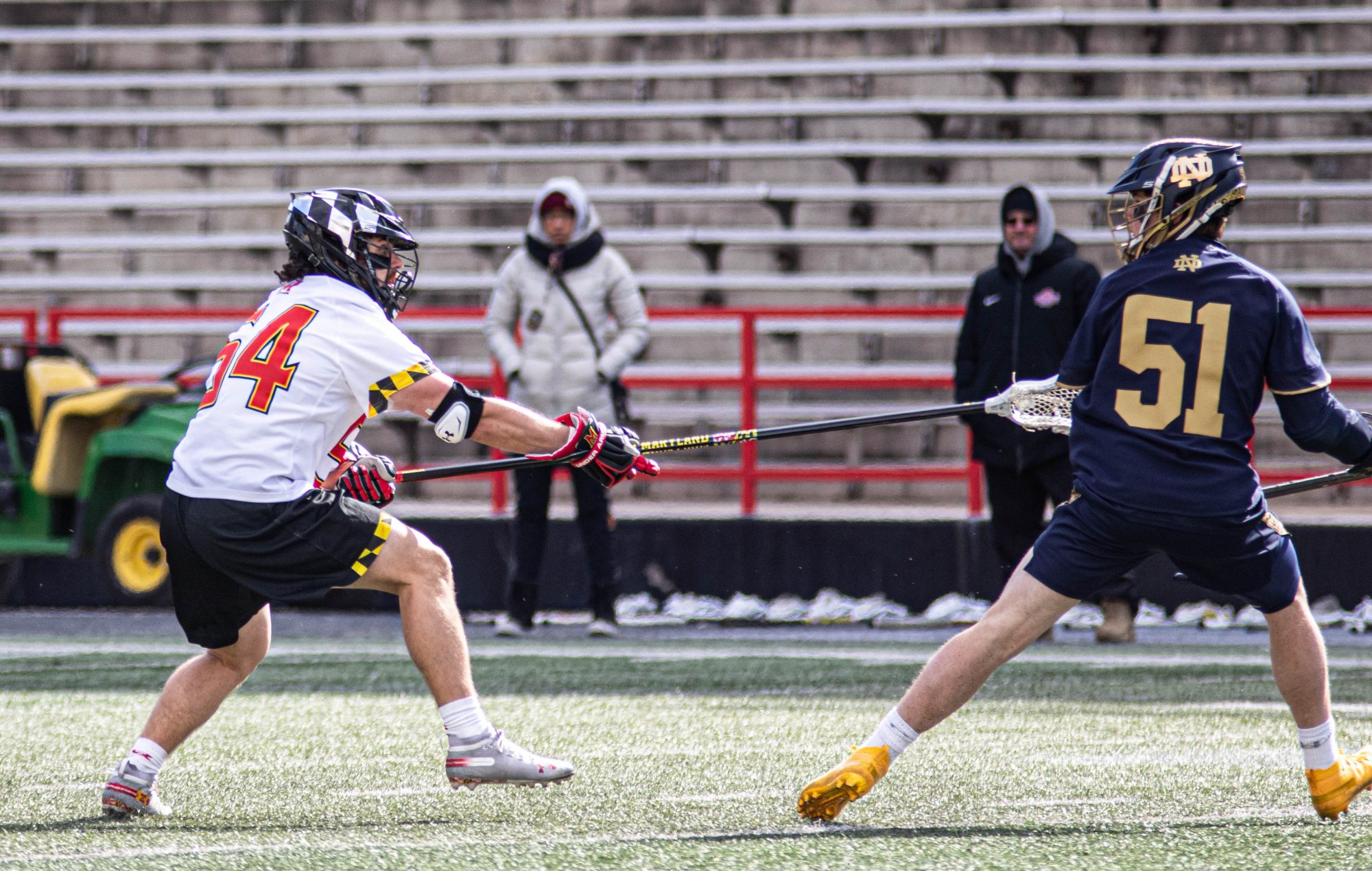 For the past two weeks, the scene in the Maryland men’s lacrosse team’s locker room resembled an infirmary, its patients ambling around with a variety of ailments and injuries that threatened to dissolve the continuity coach John Tillman strived to establish early in the season.

And during those two weeks, Tillman’s squad languished, the disconnect between each other growing ever apparent as the Terps squeezed past Richmond and Penn. Eventually, Maryland’s struggles came to the surface in a 13-12 loss to Villanova on Feb. 18 — a game in which the Terps never led against a winless Wildcats squad.

An unexpected 10-day break followed, the consequence of a norovirus outbreak that caused Navy to postpone its Feb. 22 matchup with the Terps hours before it was set to begin. The lengthy hiatus gave Maryland a chance to recover from its host of maladies and rekindle some of the partnerships between teammates that looked so promising in its first game against High Point.

And on Saturday against No. 5 Notre Dame, the Terps looked revitalized. Gone were the turnovers that plagued Maryland’s comeback efforts against the Wildcats. In its stead, a well-balanced attack and midfield stood to complement one another, backed by a stingy defensive unit that recorded 16 takeaways.

Given the quality of their opponent, it was perhaps the Terps’ most complete performance of the season, a game that reiterated Maryland’s status as a contender. The Terps lend much of their display to that 10-day lull, where players returned from spells away from the team and reintegrated themselves into Tillman’s gameplan.

“I think that really played into our favor,” attackman Logan Wisnauskas said. “Getting guys healthy, getting guys off some sickness, I really think it helped us — got us fresh, got us rejuvenated.”

For many programs across the country, the winter months are brutal to team health. Practices and games are typically held outside, exposing players to frigid conditions. Meanwhile, the close-knit natures of teams also pose a threat — if one player catches a bug, it’s possible a wave of his teammates will follow suit, Tillman said.

Maryland was no exception, with multiple players forced away due to the flu.

“We just didn’t know who was going to be able to practice,” Tillman said. “We had some injuries, but it was like guys were sick on and off. … It crushed our guys.”

As the Terps struggled to field practice squads for weekdays, their performances faltered on weekends.

Soon, the sniffles and coughs that reverberated around the locker room walls were no more. And as the Terps resolved their health woes, a new sensation took shape: anticipation.

“I think it made us a little hungry,” defender Nick Grill said. “We wanted to go out … to really just prove that we were getting better in those 10 days and that we didn’t just take a week off — we were ready to play against a top-five team.”

Maryland’s frenzied first-quarter display showed the hallmarks of a team slowly building its strength and chemistry back up. Attackman Jared Bernhardt thumped two shots beyond goalkeeper Liam Entenmann’s stretch in just over a minute, billowing his attacking unit with confidence while providing the rest of the squad with a platform to grow into the game.

The Terps’ starts had been a point of emphasis in the 10 days prior. Tillman hoped to see a reversal away from the poor first-quarter showings that were so prevalent in Maryland’s first four games.

“Coach Tillman was emphasizing the first five minutes,” Grill said. “Understanding that if we win those, it would give us a good start.”

It was yet another example of just how pivotal Maryland’s period away was — players flew around the field with an energy and ferocity that had been lacking in previous matches.

Moreover, Tillman’s squad began to show inklings of its ceiling, a benchmark by which Maryland will measure itself as it inches toward conference play.

So far, the Terps’ campaign has been defined by flux — newcomers trying to get themselves up to speed with Maryland’s gameplan. Illness certainly didn’t help foster that sense of continuity that Tillman and his staff so desperately craved.

Back to health, Tillman’s squad is rapidly nearing its best. The Terps’ playing better has coincided with a change in energy throughout the roster.

“The effort, the energy today was terrific,” Tillman said. “It had been a long 10 days and [I’m] … really proud of how those guys handled the 10 days. It’s tough to go that long and not get stale and stagnant.”

Once, Maryland’s locker room resembled an infirmary — but now, it’s a habitat for growth and prosperity, a 10-day period away from play giving the Terps a chance to reclaim its place among the best teams in the country.

And for that, they are grateful.