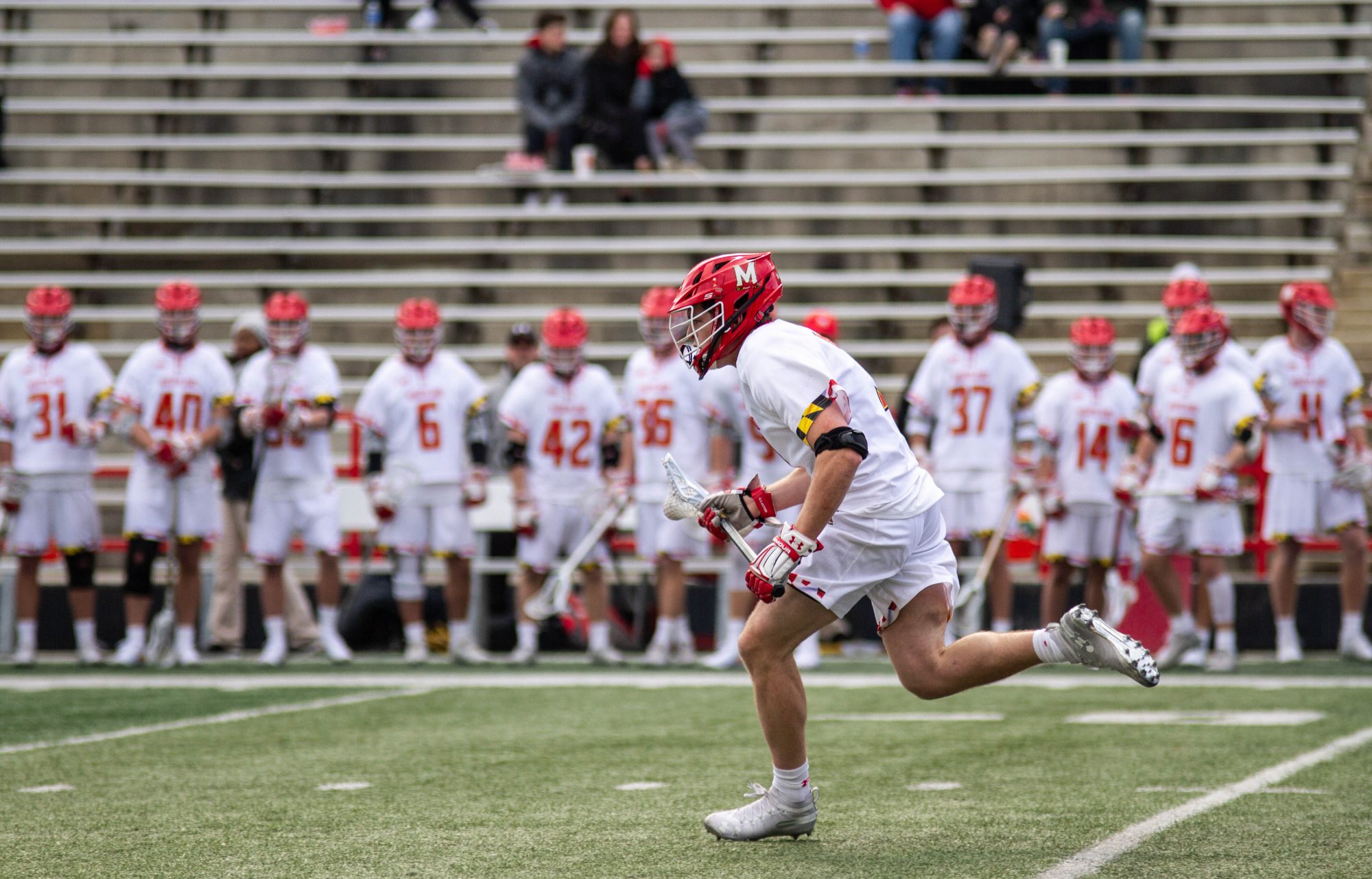 Deep into overtime of Maryland men’s lacrosse’s Feb. 8 matchup against Richmond, the Spiders held off the Terps’ efficient attack, setting up a counter-attacking opportunity for themselves in the process.

Richmond’s midfield charged toward goalkeeper Chris Brandau’s net, with the ball eventually finding midfielder Tim Adams, who turned forward — hoping to see acres of green turf in front of him.

Instead, he was met by defender Nick Grill, armed with a long stick raised toward the rafters. With one swift move, Grill swiped down on Adams’ stick, sending the ball ambling toward the sideline. Just seconds later, Maryland had secured possession, with Grill using a combination of his guillotine-like chop and burly 185-pound frame to barrel long stick midfielder Sean Menges off the ball.

Grill’s contribution to the Terps’ eventual 14-13 double-overtime victory was understated — his statline of four ground balls and one caused turnover was far less gaudy than those of his more prolific attacking teammates. But Grill’s performance was representative of his leadership approach, a wily veteran willing to lash his body around to give his team the best chance to win.

And surrounded by a youthful backline, Grill’s experience takes on greater importance for coach John Tillman’s squad — both on and off the field.

“Leadership may not be the best word,” Grill said. “I just have a ton of experience playing college lacrosse for four years, playing a ton of games. You just learn some things you just don’t learn on film or in practice.”

[Read more: When Maryland lacrosse needs a clutch play, it can count on Anthony DeMaio in “Tony Time”]

Grill’s path to College Park started in Milwaukee, where he starred for Marquette. Coming in as a relatively low-profile recruit in 2017, Grill was a force in the blue-and-gold, earning All-Big East honors in each of his three seasons with the Golden Eagles. Marquette was competitive in the Big East, too, making it to the semifinals of the conference tournament in 2017 and 2018.

Then, coach Joe Amplo left for Navy in the summer, opening the door for Grill to take his talents elsewhere. Eventually, he got into contact with Tillman — a ready-made match, Grill said.

“When I got into the portal, coach Tillman and me connected right away, we really had a good relationship,” Grill said. “He was telling me about what this program was about, and it really excited me — the principles that they have, how they compete on and off the field and the schedule that they play.”

For all that Maryland offered to Grill, his commitment gave its defense something more: maturity.

Grill has showed out so far, causing a team-high six turnovers while scooping up eight ground balls. But it’s his work with his partners in defense that has been the real marker of his value to the Terps.

[Read more: “His game’s so versatile”: Logan Wisnauskas is more than a scorer for Maryland lacrosse]

This is apparent with John Geppert, the offensive midfielder turned defender who has been a standout in the first four games of the year.

“Nick Grill this fall has came in and helped me a lot,” Geppert said.

Grill’s expansive lacrosse career took him from Milwaukee to College Park in the hopes of pursuing something that didn’t seem as attainable with the Golden Eagles: hardware. But as this season has progressed, Grill’s on-the-field impact is matched only by the knowledge he imparts on players such as Geppert and Brett Makar, the present and the future of Maryland lacrosse.

The Terps’ defense hasn’t been impenetrable, suffering through spells of languishment, as was the case at times against the Spiders.

But Grill’s quiet guidance was on display when it mattered the most Feb. 8, flying across the back-third of the field to break up a potential Richmond goal-scoring opportunity before it materialized.

On the field, Grill is a stopper. Off of it, he’s a teacher. And Maryland will need both of those abilities to shine through to get the best out of its crop of talented defenders.