When Maryland lacrosse needs a clutch play, it can count on Anthony DeMaio in “Tony Time” 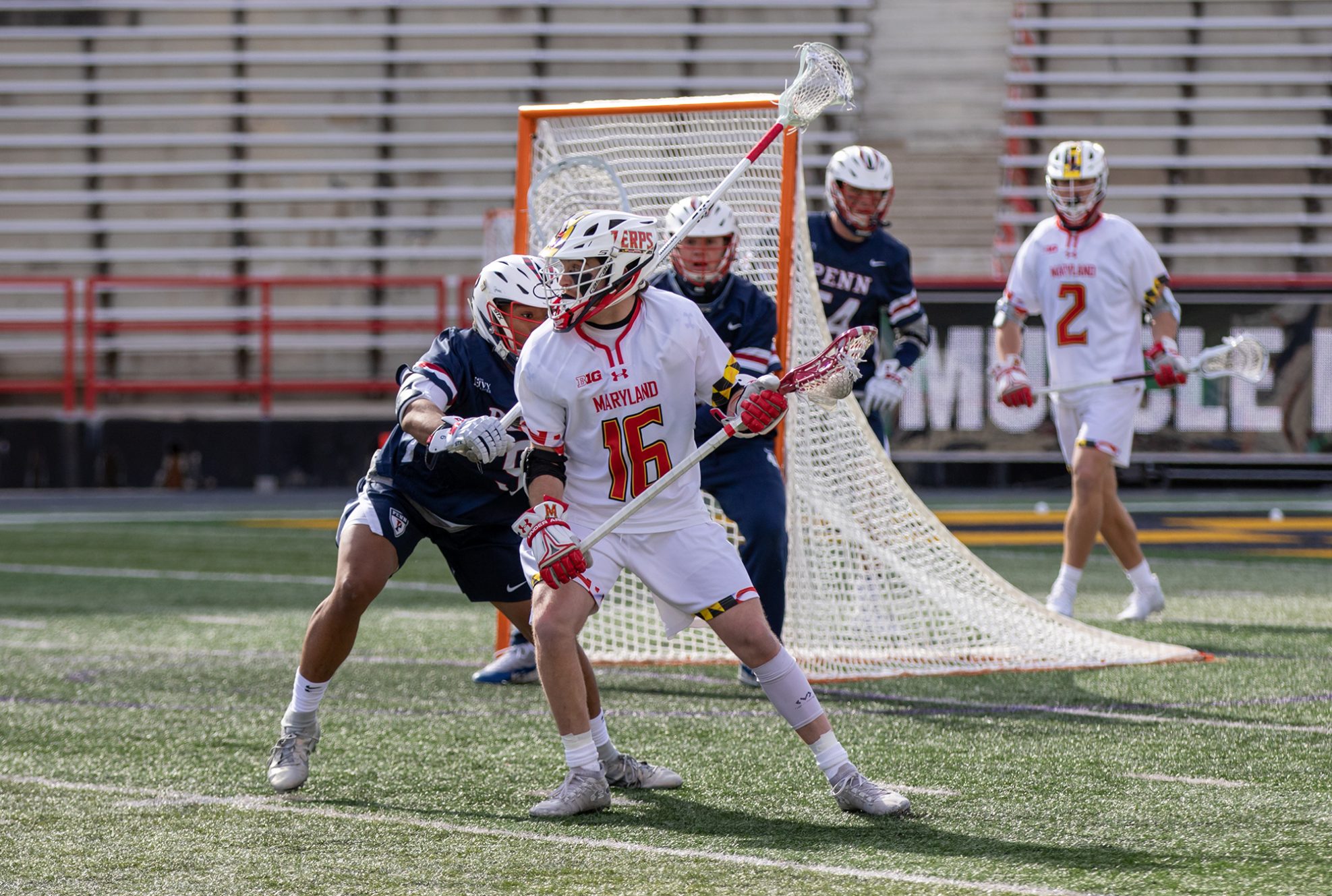 Attackman Anthony DeMaio carries the ball during the game against University of Pennsylvania on Feb. 15, 2020. (Cam Andrews/The Diamondback)

The clock starts ticking during practices, with Anthony DeMaio darting toward the crease, taking aim and catapulting a shot toward the goal frame.

As soon as DeMaio’s shot ripples the net, the Maryland men’s lacrosse attackman lets his teammates know just what time it is — “Tony Time.”

“Just know that, in practice, when defense gets scored on, that’s not the last time you’re going to hear about it,” defender Nick Grill said. “He’s going to make sure you know about it and understanding where it’s coming from — especially when it’s Tony Time.”

Tony Time isn’t limited to the practice field, though. In fact, it’s most potent at the end of games, with DeMaio at the heart of Maryland’s comeback victories against Richmond and Penn.

The Terps have struggled in the first half of games so far, often finding themselves down big heading into the fourth quarter. But with DeMaio and his Tony Time, coach John Tillman’s squad has a clutch performer — one who relishes the opportunity to compete when the lights are brightest.

“He’s going to consistently make the right play, plays with a whole lot of passion, loves to play,” Tillman said. “He’s just so smart — he’s usually a play ahead, thinking about what could happen, and anticipating a lot faster than some other guys.”

After being named an honorable mention on Inside Lacrosse and USILA’s All-American teams in 2019, DeMaio came into this season tethered to heightened expectations. Alongside fellow attackmen Jared Bernhardt and Logan Wisnauskas, the trio were poised to rank among the highest-scoring in the country.

Bernhardt and Wisnauskas combined for 95 goals last campaign and their penchant for multi-goal games draws the lion’s share of attention from opposing defenses. And, after spending much of the off-season working on his right-handed shot, DeMaio has capitalized on the space and time Bernhardt and Wisnauskas’ talent affords him; he’s notched eight goals and 10 assists so far.

“He certainly does a decent amount lefty, but he’s more than capable going to his right hand as well,” Tillman said. “That, to me, is his level of investment and how hard he’s worked.”

DeMaio’s investment has been apparent in his late-game displays, often serving as the fulcrum of Maryland’s comeback efforts. Nearly 45 percent of DeMaio’s points have come in the fourth quarter or overtime. Hence, Tony Time.

“It’s kinda just my nickname, so I guess it’s just saying that it’s the time to perform,” DeMaio said with a chuckle. “I stay out of it — I can hear it from the sideline, but it’s definitely pretty interesting.”

DeMaio’s flair for the dramatic reached its peak on Feb. 8 against the Spiders. With the Terps down four heading into the fourth, he got to work. First, the junior floated a pass into midfielder Jack Brennan’s stick behind the net. Brennan cut in front of the crease and scored, cutting Richmond’s lead to two.

Less than three minutes later, the Brennan-DeMaio partnership linked up once more. DeMaio circled around the net, eventually fizzing a pass toward Brennan. The result was the same, Brennan thumping a shot past goalkeeper Jack Rusbuldt’s grasp.

Later, DeMaio flashed in the crease, waving his stick to signal Wisnauskas. With defenders rushing to limit DeMaio’s opportunity to fire a left-handed shot, DeMaio shifted to his right, rifling a right-handed effort into the net to secure a 14-13 victory. The clock may have read 2:12 when DeMaio’s shot rustled the net, but to his teammates — who have spent the past few months seeing the attackman’s progression — it was clear what time it was.

“It’s great to see Tony get a right-handed goal like that,” Bernhardt said after the game.

DeMaio’s fourth-quarter fireworks have been crucial for the Terps, who have entered the final frame down two or more goals in all but one of their four games this season.

While Maryland is hoping to cut out the necessity of relying on late-game comebacks, especially after its fourth-quarter rally came short against Villanova on Feb. 18, Tillman’s squad takes solace in its closer — the one who chirps during practices and backs it up at the end of games.

“Tony relishes those moments, he’s a big personality, he understands that he likes having the ball in his stick, and we see it in practice all the time,” Grill said. “He’s an All-American for a reason.”