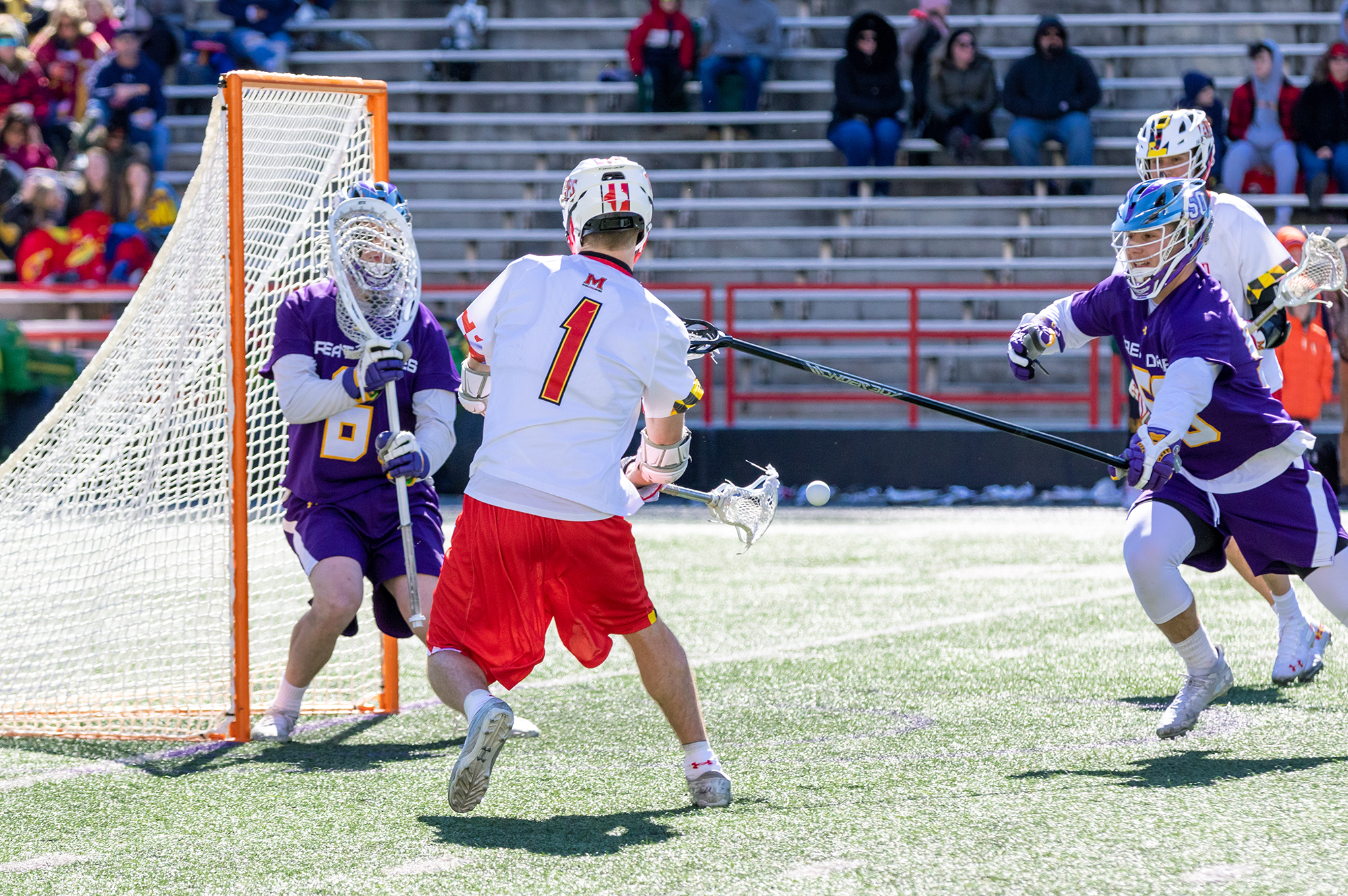 There wasn’t much left for Daniel Maltz to do when the ball touched his stick, standing a few steps outside the crease with the goal gaping.

In fact, most of the work started 60 yards away with Maryland men’s lacrosse midfielder Roman Puglise. Albany attackman Tehoka Nanticoke drove to the net, looking to barrel through the Terps’ backline — a task made significantly easier given his 6-foot-1, 248-pound build.

But Puglise was undeterred — the junior charged, lowered his shoulder, and drove his weight into Nanticoke. And as Albany’s talisman crashed to the earth, spewing pellets of turf in his wake, the damage was done. Three passes later, and the ball was in the back of the net, one of Maryland’s six first-quarter goals.

It was a bit of a role reversal for the Terps on Saturday, an impressive start giving way to a frantic finish. But Maryland survived, earning a 14-13 victory over a resurgent Albany squad.

“With the way we started, getting off to a good start,” coach John Tillman said. “Not finishing that way is a little disappointing.”

In recent weeks, Tillman has implored his squad to show its intensity and desperation — typically reserved for the fourth quarter of Maryland’s opening four fixtures — at the start of games.

Against Notre Dame, the Terps’ showed inklings of that shift. And on Saturday, their commitment to Tillman’s instructions was on display from the opening faceoff, notching five goals in the first seven minutes.

“The biggest thing really we want to do was play fast, space well, and share the ball,” Tillman said. “A lot of those, you can give credit to Jared and Logan.”

Maltz’s goal gave the Terps a 6-2 edge going into the second, their largest lead coming out of the first frame this season.

Still, Nanticoke was always a threat — he slotted from deep late in the first. And with Maryland’s defense keying in on Nanticoke’s threat, a new force emerged in the second: midfielder Graydon Hogg.

Hogg, fresh off a three-goal display against Massachusetts on March 3, drifted in front of the net with five minutes left in the second, flashing a shot past goalkeeper Logan McNaney’s stretch. Two minutes later, Hogg’s teammates huddled around him again, another shot rippling McNaney’s net.

While Maryland held the advantage at the end of a goal-filled second quarter, the Great Danes were on the ascendancy — four goals in the final five minutes proved as much.

“They just kept playing and playing, they played hard,” Tillman said. “[Albany coach] Scottie Marr did … did a great job.”

So, the Terps looked to keep the ball. And their tactics worked early on, Maltz scoring his second less than three minutes into the half.

Nanticoke’s presence still loomed, though, having been held to a single goal in the first despite averaging 3.50 goals per game coming into Saturday.

“He’s a great player, obviously put a lot of emphasis on him during the week,” defender Brett Makar said. “Big, strong guy, so whenever you get locked up on him, he does a good job using his size to get shots off.”

Maryland did hold a five-goal lead at the end of the third, courtesy of goals from Maltz, Wisnauskas, and attackman Anthony DeMaio.

But it was anything but comfortable.

Typically, it’s the Terps who are the domineering force in the final frame, adrenaline and desperation shining through as Tillman’s squad sees shot after shot rustle the goal netting.

But on Saturday, it was the Great Danes who lit up the scoreboard in the final 15 minutes, Nanticoke leading the charge as Albany outscored the Terps 5-1.

“The zone … we prepared for it, at times we weren’t moving the ball, we were getting a little stagnant,” Bernhardt said. “Something we can look back to the film and get better at.”

With 10 seconds left, the ball was just outside Maryland’s crease, Albany’s attack pushing for a late equalizer in an effort to send the game to overtime.

The Terps’ backline did enough, though, deflecting the ball up and away from danger to secure a dramatic 14-13 victory over a resurgent Great Danes bunch.

“We had to make a stand at the end,” Tillman said. “Had to stick together and really take on a talented offense, and the guys got it done.”