Living in a UMD dorm this year requires agreeing to new terms. Some say they’re unfair. 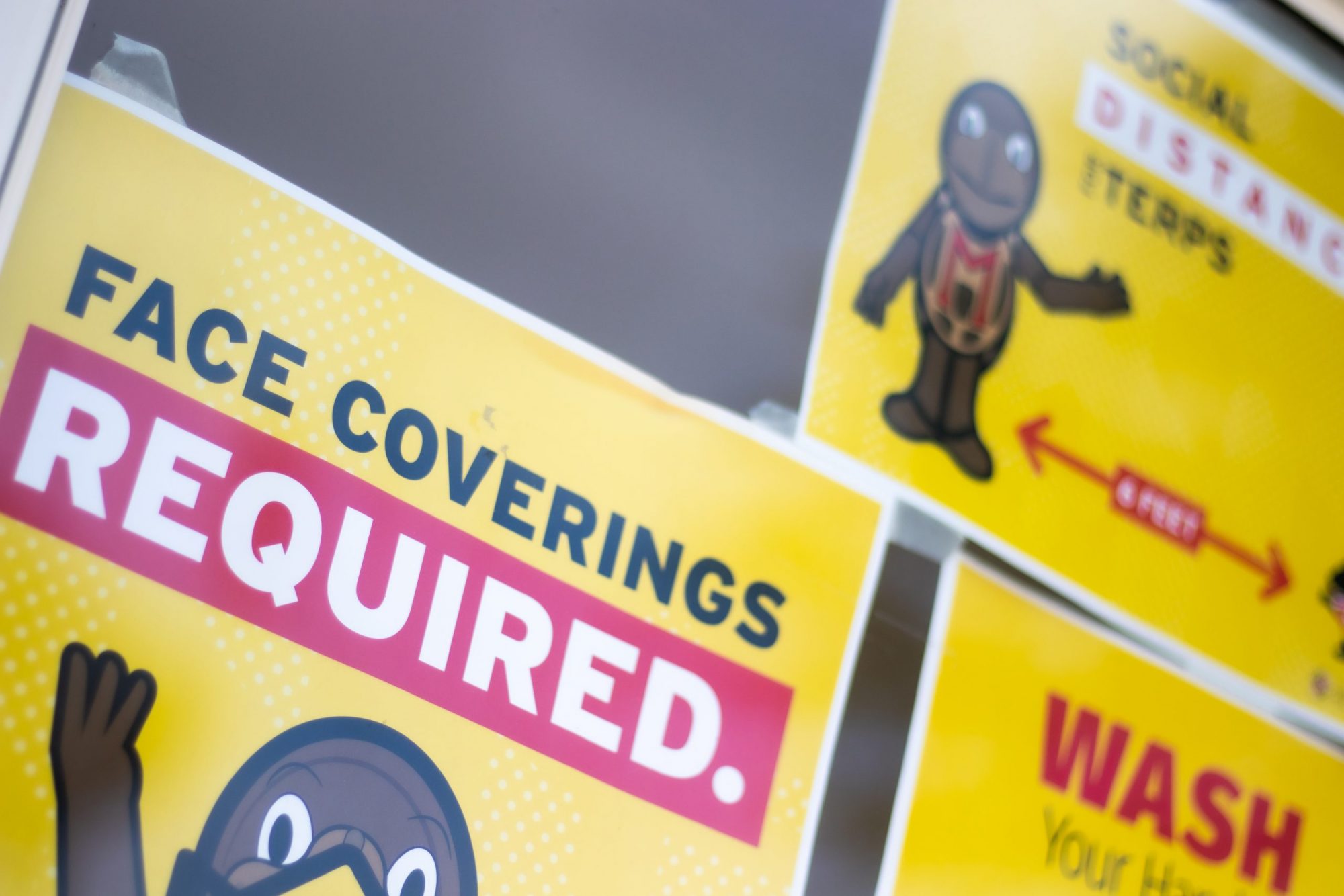 The University of Maryland has put up posters on the campus in preparation for students' return to campus in August. (Julia Nikhinson/The Diamondback)

University of Maryland students who want to live in a dorm this fall don’t just have to sign the typical on-campus housing and dining agreements — they also have to agree to a set of new conditions related to the novel coronavirus pandemic.

But as Monday’s deadline for signing these documents looms, some have spoken out against the conditions detailed in a new addendum to the housing agreement.

One condition states that the university is under no obligation to issue refunds if on-campus housing is closed or restricted during the semester due to public health concerns. Another ostensibly absolves the university from liability should a student become seriously ill or die from contracting the virus on the campus.

The University of Maryland isn’t the only school requiring students to sign similar waivers before returning to campus, and a debate is taking shape over whether these agreements are ethical. At this university, some have condemned the addendum for preventing students from holding administrators accountable for their decision-making, while others have criticized it for not prioritizing student finances amid a global pandemic.

Saba Tshibaka, a rising senior who is part of a student task force focused on student advocacy during the pandemic, said she found the university’s transparency around the implications of the addendum insufficient.

However, Patty Perillo, student affairs vice president, said the university did everything it could to be transparent, pointing to the decision to include the new conditions in a separate document, rather than sending students a longer, denser contract.

In particular, Feldman takes issue with clauses — like the one in this university’s addendum — that protect the school from being sued by students who contract the virus on campus. She calls these types of clauses unethical: While universities might need to take certain steps to comply with terms set by their liability insurance providers, that doesn’t mean they have to preemptively shut down any legal accountability of possible negligence, she said.

“If you sign this, you’re opening yourself up to a legal argument that you have no right to bring suit, no matter how carelessly [the universities] operate their doors,” she said.

Michael Spivey, a lecturer in the government and politics department at this university, agreed with Feldman’s interpretation of the addendum: the university is trying to protect itself from liability.

For example, he said, say the university promises to monitor student temperatures daily and grossly fails to do that, leading to a serious spike in cases. In that case, Spivey said, it would be reasonable to assume that the university would say they couldn’t be held liable, per the agreement.

If he were deciding for his child, Spivey said, he wouldn’t have them live on campus in the fall — the risks are just too high, he said. But, he said, if he were advising the university, he would have told administrators to put out exactly the agreement they did.

Rob Wolle, a rising junior physics major, is one student planning to return to campus this fall. He doesn’t take issue with the clause in the addendum that shields the university from liability.

“I don’t think any plan is going to be risk free,” he wrote in a message. “UMD shouldn’t be responsible unless they were knowingly infecting people.”

However, he called the clause that saves the university from having to refund students should campus close down “pathetic.”

“We all know something like this is just an extension of the greed UMD students have come to expect from the administration,” he wrote. “If they revoke my housing, especially this year when they can prepare for it, why should I pay the price?”

Despite his concerns, Wolle signed the addendum and will be living in Queen Anne’s Hall in the fall. He knows he won’t be able to see friends and will likely have to spend a great deal of his time in his dorm, but he said having housing secured for the spring and access to research opportunities on campus is reason enough to return.

Two weeks ago, members of the he COVID-19 Student Task Force launched a petition, demanding that administrators “prioritize students over profit” in policies regarding the pandemic. The petition singled out parts of the housing addendum regarding refunds.

“In a global pandemic in which students have had their financial situations completely uprooted, they deserve to receive their money back in the event that the University stops being able to provide the food and housing that they paid for,” the petition reads. As of Sunday evening, more than 1,000 people have signed on in support.

However, Perillo said the refund policy is rooted in the university’s desire to protect the jobs of housing and dining staff.

“In order for us to allow other members of our community to … have jobs, then when we open up … our residence halls, with it comes with all that responsibility,” she said.

Students also expressed concerns that the university hadn’t sufficiently consulted students when making decisions. Emily Berry, Resident Hall Association president, said she was the only student member of the workgroup that wrote the addendum, and she often wasn’t consulted until after a final decision had been made.

The rising senior government and politics major said she wishes more students had been involved in the process, so administrators and students could work together to find a solution where students would not have to shoulder the financial burden if campus closes.

“This is a problem I see throughout campus decision-making—students are often not looped in until it is too late to make an impact,” she wrote in a message.

Tshibaka echoed Berry’s criticism. She’s also concerned that the university hasn’t released more concrete plans regarding how campus will operate in the fall.

The university hasn’t outlined, for example, how the bus system will operate, which study spaces will be open or whether students will be penalized for having people who aren’t their roommates in their dorm — painting a fuzzy picture for what university life will look like for students trying to evaluate the risk they are taking on by living on campus.

Earlier this month, the university released a brochure detailing its plans for reopening campus, which includes details on contact tracing and cleaning protocol, among other procedures. Perillo said the central message to students will continue to be what it has been since March: wear a mask, social distance and follow county and state guidelines.

When asked how the university would monitor one of the biggest concerns in opening up campus — parties and Greek life, which were the sources of dozens of recent COVID-19 cases at UC Berkeley and University of Washington — Perillo said she believes students know what is and isn’t okay.

Ultimately, Perillo says, the university wants to instill an understanding of what it “means to be part of a community” in students to motivate them to make the safest choices.

But Tshibaka urged the university to publish further details about how life on campus will operate in the fall.

“This is not one email. This is a handbook, and this is policies,” she said. “Be specific. We’re begging for you to be specific so we can hold you accountable … Even if it’s hard, go ahead and implement the policies, because this is literally life or death.”