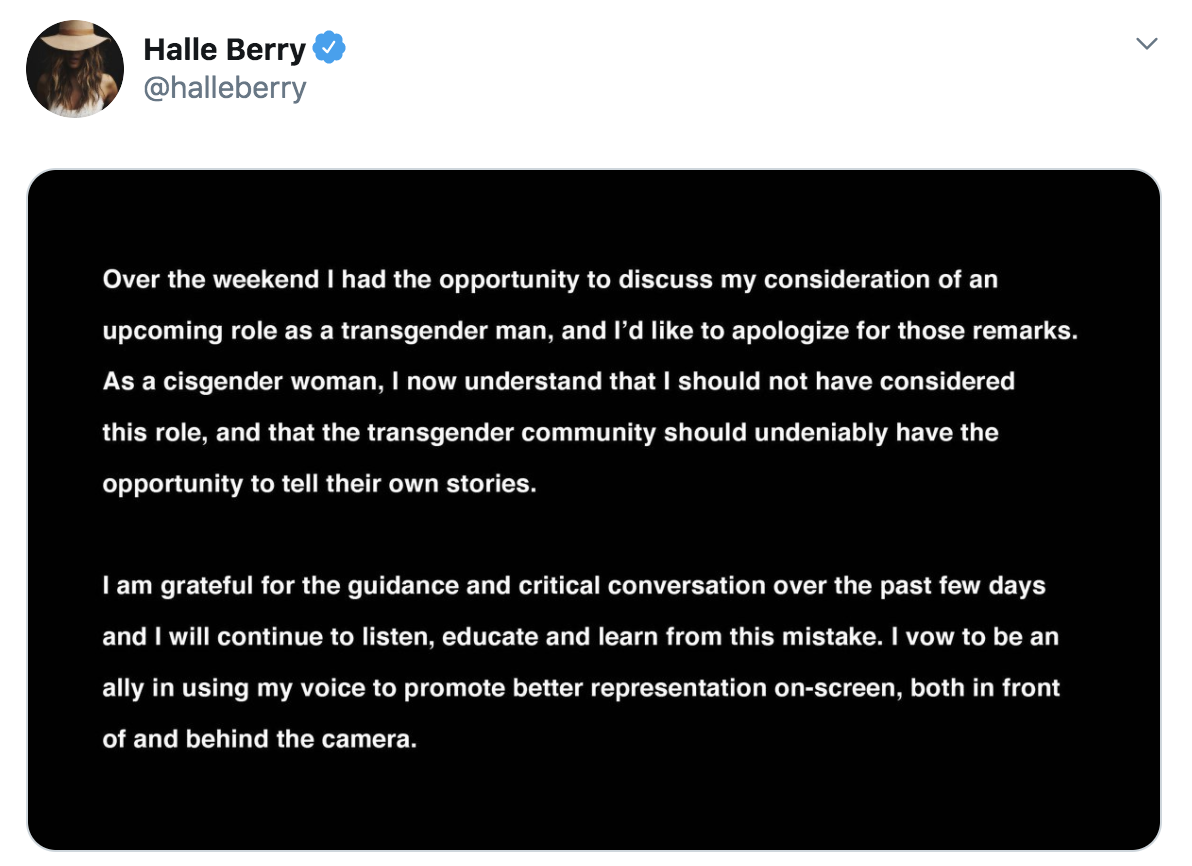 Last week, critically acclaimed actress Halle Berry was interviewed by hairstylist Christin Brown on an Instagram Live, where she expressed her interest in playing a transgender man for an upcoming role. “The film is about a character where the woman is a trans character, so she’s a woman that transitioned into a man,” Berry said. “She’s a character in a project I love that I might be doing.”

This statement was met with backlash, and Berry issued an apology via Twitter: “As a cisgender woman, I now understand that I should not have considered that role, and that the transgender community should undeniably have the opportunity to tell their own stories.”

“I vow to be an ally in using my voice to promote better representation on-screen, both in front of and behind the camera,” Berry continued.

The idea of portraying transgender individuals in media is not a new concept. The recently released Netflix documentary Disclosure follows on-screen portrayals of trans or gender nonconforming people as early as the 1914 silent film, Judith of Bethulia by D.W. Griffith. Over the past hundred years, though, this reputation has usually been deplorable, reducing a trans character to their gender identity or using them as the punchline of a twisted joke.

Newer, more modern shows such as Pose and Euphoria show trans people as people, not freaks of nature or subjects of cruel commentary. The characters in these shows are well-rounded and possess nuance that includes flaws as well as aspirations, just like their cisgender counterparts. This progress is amazing but equally disheartening to witness, considering it took nearly twenty years into the 21st century to achieve this bare minimum in representation. With these feats in mind, I foolishly assumed that, from now on, Hollywood executives would try to highlight the importance of trans actors by casting them into trans roles — if not to please the masses, then at the very least for the sake of political correctness and gaining some woke points. But sadly, not even that is enough to lure them into feigning basic decency.

Instead, cisgender actors like Berry get cast into transgender roles and that’s it. If we’re lucky, the public outrage will make the actor reconsider and drop the role completely. But in other cases, they’ll get nominated and win awards for it because cutting your hair or wearing a dress is seen as revolutionary — but that’s usually reserved for when it’s a cis actor playing a trans person.

Berry’s apology shows exactly what’s wrong in the entertainment industry. Though she did the right thing by apologizing, it’s important to question how Berry can “vow to be an ally” if she can’t even refer to a transgender man correctly. Where do we begin if she can’t understand the story she’s telling isn’t a female one? If Berry mentioned her blatant misgendering of the character in her apology, I (and other trans people) would be less harsh on her. This “woman” she spoke of is in fact, a man.

Trans people have a right to be mad. We have been having our stories told to us, and not by us, for years, and the damage that an ignorant and trauma-obsessed perspective causes is immeasurable. Misrepresentation in the media has boiled trans people down to a stereotype or plot device in almost every story they’re a part of. Because of this, documentaries like Disclosure have to be made to point out the industry’s wrongdoings in hopes of educating the masses and spearheading change.

Very few mainstream projects highlight the lives of trans people multidimensionally, and even fewer of those stories showcase trans men played by actual trans men. The one example I can think of is Elliot Fletcher’s character Trevor on the show Shameless. Trevor was nuanced and had depth outside of his gender identity. Fletcher’s character was a rare and refreshing glimpse at an accurate representation of a marginalized community.

If Berry wants to be an ally, she should be directly involved in projects written and produced by trans creators. She should have conversations with actual trans people to try to understand our diverse experiences, if she really is so keen to “experience that world.” Trans people are not costumes or research projects that give you an express ticket to awards season; we are real people with feelings.

More importantly, Halle Berry does not need to be coddled. She is a grown woman who should know that her words and actions (given a huge platform) have consequences, whether she meant it that way or not. To see people — especially those not targeted by her comments — explain their fatigue of celebrity criticism and whine about “PC Police” is unsettling.

i don’t think halle berry is some horrible transphobe. i think she’s an example of why trans people should play trans people. we understand our own experiences better than cis ppl can and can navigate tricky language situations that cis ppl might flub from inexperience.

Berry genuinely seemed like she had a desire to accurately represent the community, but her approach was wrong. She can start to correct her actions by acknowledging the misgendering of the character she sought to play, and by learning and accepting criticism from the trans community. There is a lot of work to be done — one apology is just the beginning.