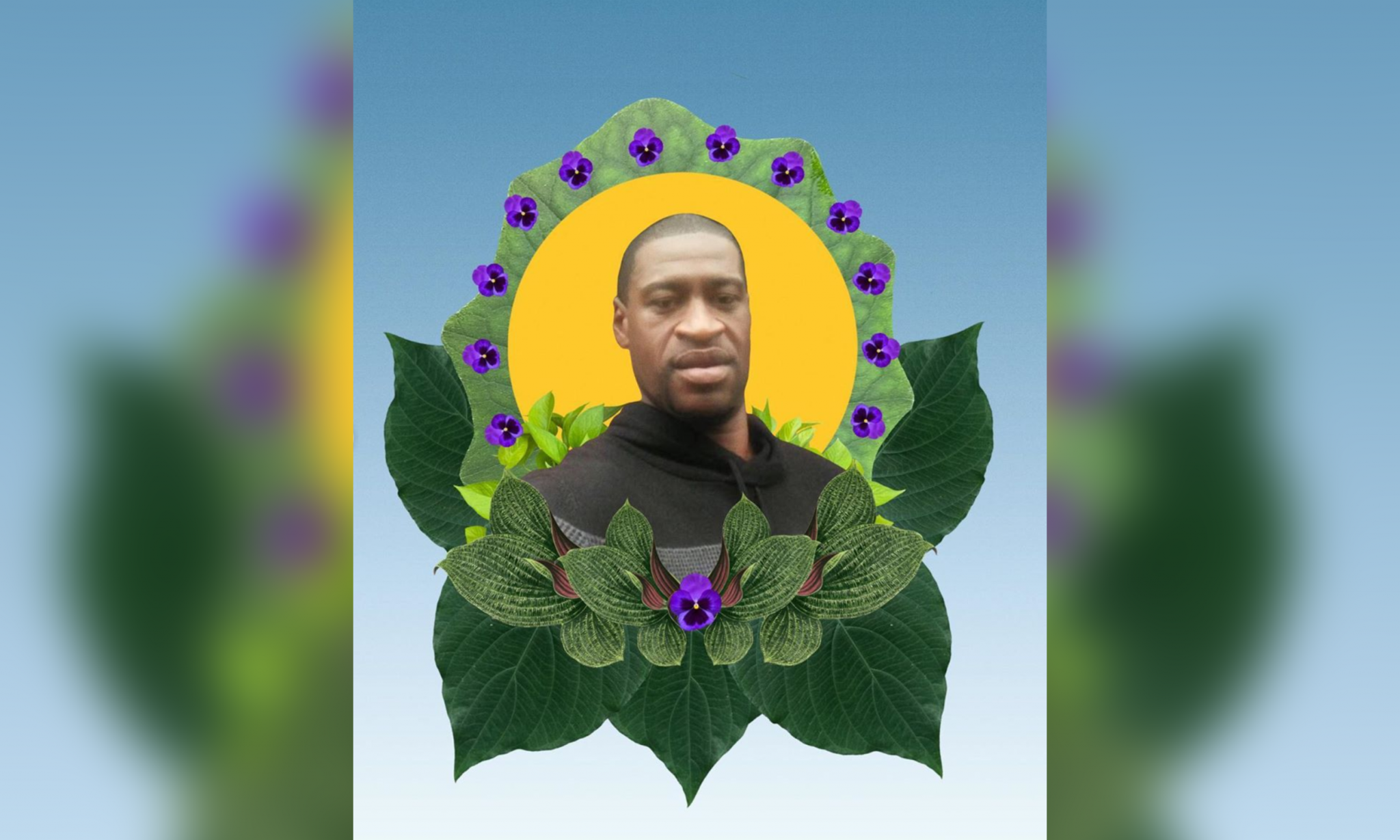 Viral portraits of George Floyd and other victims have been a major part of the online Black Lives Matter movement. (Photo courtesy of Ruby Marquez)

They are made of pixels, their eyes sometimes closed in gentle contemplation, Black skin glinting with sunlight, propped up by halos of leaves or flowers or objects representing their interests in life. These victims of police brutality and anti-Black killings have been immortalized in digital portraits that emphasize their beauty and softness. Over the past month, Instagram users have liked and shared some of these portraits thousands of times. For weeks, these Black faces took precedence over the beauty influencers, Shih Tzu photo-ops and high-cheekboned white women that often make up Instagram’s daily diet. Then, just as quickly as they came, the pictures subsided.

But the artists responsible for creating the portraits are not done remembering their subjects. For them — and for other activists working to fight injustice — the work has barely begun.

Ruby Marquez, a collage artist based in San Francisco also known as Broobs, has made dozens of portraits of activists and Black and brown victims of racist killings, including a portrait of Oluwatoyin Salau, a 19-year-old Black Lives Matter activist who was found dead about a week after her disappearance. In Marquez’s collage of “Toyin,” an image of Salau sits in the center of a bed of leaves, a yellow sun haloing her head. She rests her chin on her hands.

Marquez’s art is characterized by a distinct style of portraiture. The subjects are framed in lush flora, with faces centered in bright yellow circles that elicit Catholic imagery, like that of la Virgen de Guadalupe. The effect is a soft deification, inspired by the artist’s Catholic upbringing, though secular and earthy in its execution.

Marquez began this series of portraits after observing the media coverage following the death of Nia Wilson, an 18-year-old Black woman who was stabbed outside of a commuter train in Oakland by a white man. The KTVU coverage following her murder featured a photo of Wilson holding a gun-shaped phone case — a decision that sparked outrage for its suggestion that Wilson had criminal persuasions. Marquez wanted to create an image that would counter those assumptions.

“I thought I should make something really beautiful to … combat that … narrative,” Marquez said. “I was just filled with so much rage, that I … felt like I had to do something. She didn’t ask to be killed.”

For Marquez, memorializing these victims through art is a weary task — but also a worthy one.

“I do make [the art], and then I feel better that I put it out and then I’m constantly reminded of it,” Marquez said. “But I think that in a lot of ways, my art does bring peace to others.”

Matty Miller, an artist and elementary and middle school art teacher, recently drew a picture of Elijah McClain, who died after police put him in a carotid hold and first responders injected him with ketamine, triggering a heart attack on the way to the hospital. (The officers responded to a call reporting a “suspicious” figure; McClain had no weapon and was returning from a convenience store, where he’d purchased an iced tea for his brother.)

In Miller’s portrait, a small, kind smile spreads across McClain’s face. Various objects float above him, representing his myriad of hobbies: a violin, a pair of toed running shoes, a sleeping gray cat, a teardrop vegetable garden.

#JusticeforElijahMcClain This gentle young man was killed by Aurora Police in Colorado less than a year ago. The officers have not been charged for taking his life. Elijah was a 23 year old massage therapist. He taught himself to play violin and guitar. On his lunch breaks from work he would sometimes bring his guitar and play music for the animals in the pet shop. Elijah loved running. He ran in barefoot running shoes because he believed they are more natural for humans to wear. He was anemic and wore a runners mask to stay warm. Content warning for violent description. On the night he was killed, he walked to the store wearing his running mask to buy iced tea for his cousins. Someone called the police about “suspicious behavior.” On the audio footage released by Aurora PD you can hear Elijah crying out, “Let go of me. I’m an introvert. Please respect the boundaries that I am speaking….I can’t breathe.” Elijah was 140 lbs. Even when he was being brutally attacked he spoke with integrity. While 3 Aurora Police Dept officers violently restrained him they called Aurora Fire Dept, who injected him with ketamine. He went into cardiac arrest and his family was advised to take him off life support 6 days later. Please share his story. Demand justice for Elijah— email Aurora representative, sign the petition demanding justice, donate to the McClain family. @justiceforelijahmcclain https://linktr.ee/Justiceforelijahmcclain Support his family’s GoFundMe page here: https://www.gofundme.com/f/elijah-mcclain #sayhisname #justiceforelijah #elijahmcclain #saytheirnames5280 #blm5280

Miller lives in Denver, a few miles from where McClain resided before his death. She found out about McClain’s killing after watching a livestream of a student-led protest in Aurora that invoked his memory.

Miller had never eulogized a victim of police brutality through artwork; she specializes in whimsical cartoons and patterns, and hopes to eventually illustrate for children’s books. But McClain’s death moved and disturbed her. She read about his many interests and was reminded of herself at a similar age.

“It was just very heartbreaking,” Miller said. “Especially that [McClain’s killing] happened so close to where I live, and I didn’t know about it.”

Miller drew the picture of McClain with the intention of selling it to benefit his family. But McClain’s mother, Sheneen, wasn’t interested in the profits; she just wanted to raise awareness around her son’s death. So Miller posted it — and Instagram users shared it. The image has crossed oceans; one man in Morocco printed it (without Miller’s permission) on shirts for his Etsy page.

“Even people who felt like they had a frame of reference of what the police are meant to do kind of got [shaken] up because he was just a sweet kid,” she said.

Chisom Ojukwu is a senior public health science major at this university who draws hyperrealistic portraits in graphite and colored pencil. On June 4, Ojukwu pulled up Google Images as a reference, and drew a picture of Breonna Taylor, whom police shot at least eight times in March after they used a battering ram to break into her apartment (the official police report claims that Taylor suffered no injuries). Ojukwu wanted to memorialize Taylor in honor of her birthday; the emergency room technician would have been 27 on June 5.

Ojukwu’s pencil portraits usually take three to four months to complete. But Taylor’s birthday was the next day, and Ojukwu wanted to work quickly. She created the portrait using Procreate, a digital drawing software. It took her roughly four hours to complete. She posted it on Instagram the next day, accompanied by a directive to take action against injustice.

“We can’t forget our sister,” the caption reads.

In honor of the life and 27th birthday of #breonnataylor ????????i decided to create some art. We can’t forget our sister and the countless other women who are fallen victims of white supremacy and police brutality. Justice still needs to be served for Breonna. For a list of action items that you can do from home to demand justice, pls visit the helpful link in @battymamzelle bio #sayhername #blacklivesmatter

“It’s kind of unfortunate that in this day and age, even during a pandemic, people are still being murdered by the police,” Ojukwu said.

Ojukwu also discussed a trope that has emerged in the coverage of Black victims: an undue emphasis on whether the victim was law-abiding and respectful instead of the cause of death itself.

Instead of focusing on the injustice of the crime, some people focus on the attributes that made the victim “good” — like being a Harvard graduate, a football star or a lover of animals.

“Regardless of what career a person is in or their class standing or anything,” Ojukwu said, “there is no justification as to why someone … [should] be murdered like that.”

Marquez, Miller and Ojukwu all hail from different cultures, locations and experiences. Yet they all felt the need to create these portraits, to memorialize and honor those killed at the hands of police officers and white supremacists. None of these artists expect compensation for their work; in fact, they all said they viewed their portraits as a way to educate and raise awareness. But they do want people who appreciate the beauty of their art to take their activism beyond observation.

“If you really care, you’ll do the research yourself,” Ojukwu said. “Just keep demanding justice, because this isn’t just a ‘now’ thing. It’s … forever.”