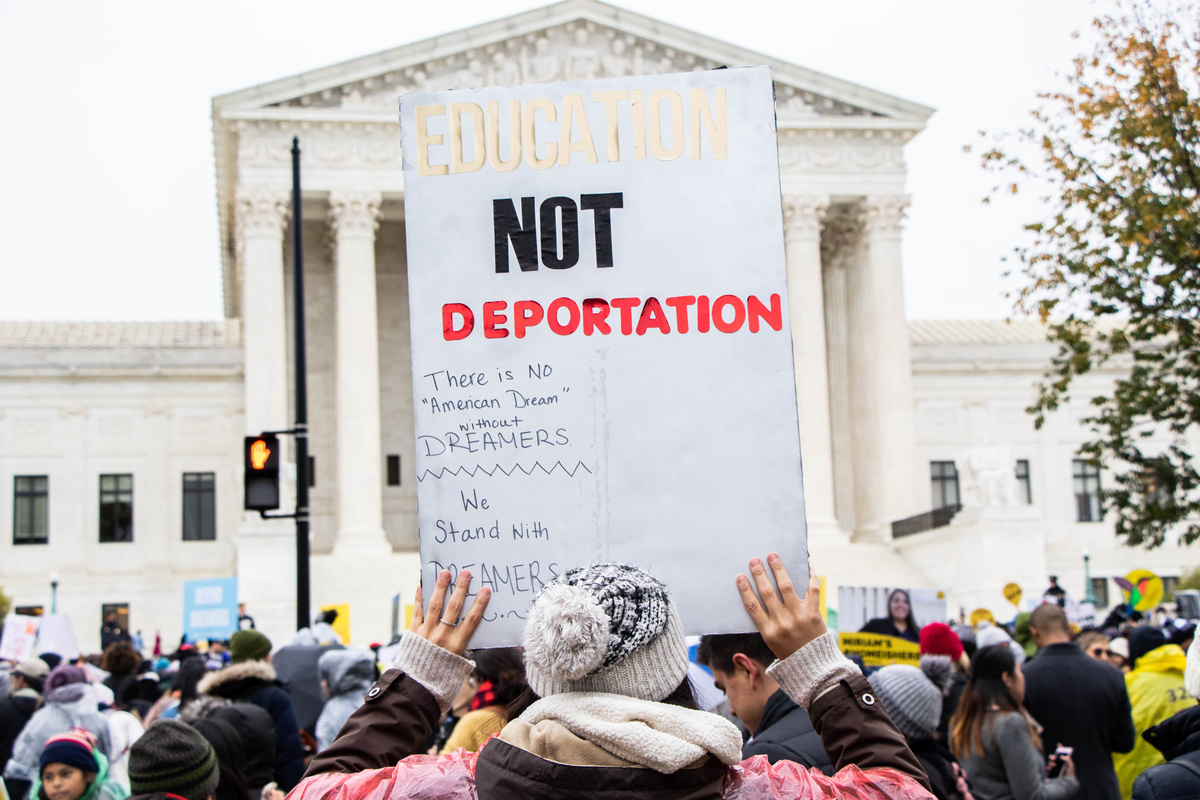 A protester holds up a sign outside the Supreme Court as it heard arguments on DACA on Nov. 12, 2019. (Julia Nikhinson/The Diamondback)

The Supreme Court ruled against the Trump administration’s attempt to dismantle the Deferred Action for Childhood Arrivals program on Thursday, meaning the program may continue to protect over 640,000 young immigrants from deportation.

“The dispute before the Court is not whether [the Homeland Security Department] may rescind DACA. All parties agree that it may,” Roberts wrote. “The dispute is instead primarily about the procedure the agency followed in doing so.”

In a campuswide email, University of Maryland President Wallace Loh celebrated the ruling — along with another Supreme Court ruling made earlier this week, which declared that the Civil Rights Act of 1964 bars workplace discrimination on the basis of gender identity and sexual orientation as well as sex.

However, Loh wrote, the futures of DACA recipients — including the 120 “Terp Dreamers” on campus — remain uncertain. He urged the passage of the American Dream and Promise Act, which would allow Dreamers to apply for permanent residency and provide a path to citizenship.

“Dreamers who signed up for DACA have thrived. Many went to college, got jobs, worked hard, paid taxes, and served in the military,” Loh wrote. “The possibility of deportation at a later date is achingly unfair, since they have done everything asked of them. Slamming the door on them shuts us off from our fundamental values and national ideals.”

Former President Barack Obama issued DACA as an executive order in June 2012, allowing young people who entered the United States before the age of 16 to live, study and work in the country legally. The program provides protection for two years, and individuals may renew their status, but DACA does not provide a path to citizenship.

Although President Trump had vowed to dismantle the program since his candidacy, his administration officially announced an end to DACA in September 2017. In this announcement, Trump wrote his reasoning for ending the program was that its creation was “unlawful and unconstitutional.” The Homeland Security Department tried to expand on this justification, but failed to satisfy the court.

Justice Clarence Thomas, who wrote a dissenting opinion, called the ruling “an effort to avoid a politically controversial but legally correct decision” on part of the administration. Thomas also suggested the decision would create precedent where the ending of any executive orders would require a reason that satisfied the Supreme Court.

Last November, students from this university joined thousands in assembling before the Supreme Court, demanding the justices not shut down the program. The school also joined other institutions in signing a brief supporting DACA’s preservation, both in 2017 and 2019.

Meanwhile, the university’s undocumented student coordinator position — which the university created due to student advocacy following Trump’s election — will be left vacant through the fall semester, due to a hiring freeze the university has enacted in response to budget restrictions caused by the ongoing coronavirus pandemic.

The ruling means the Trump administration will have to provide stronger justification to a lower court to officially end the program. The process will take some time, likely putting the administration’s attempts to dismantle DACA on hold until after the November elections.