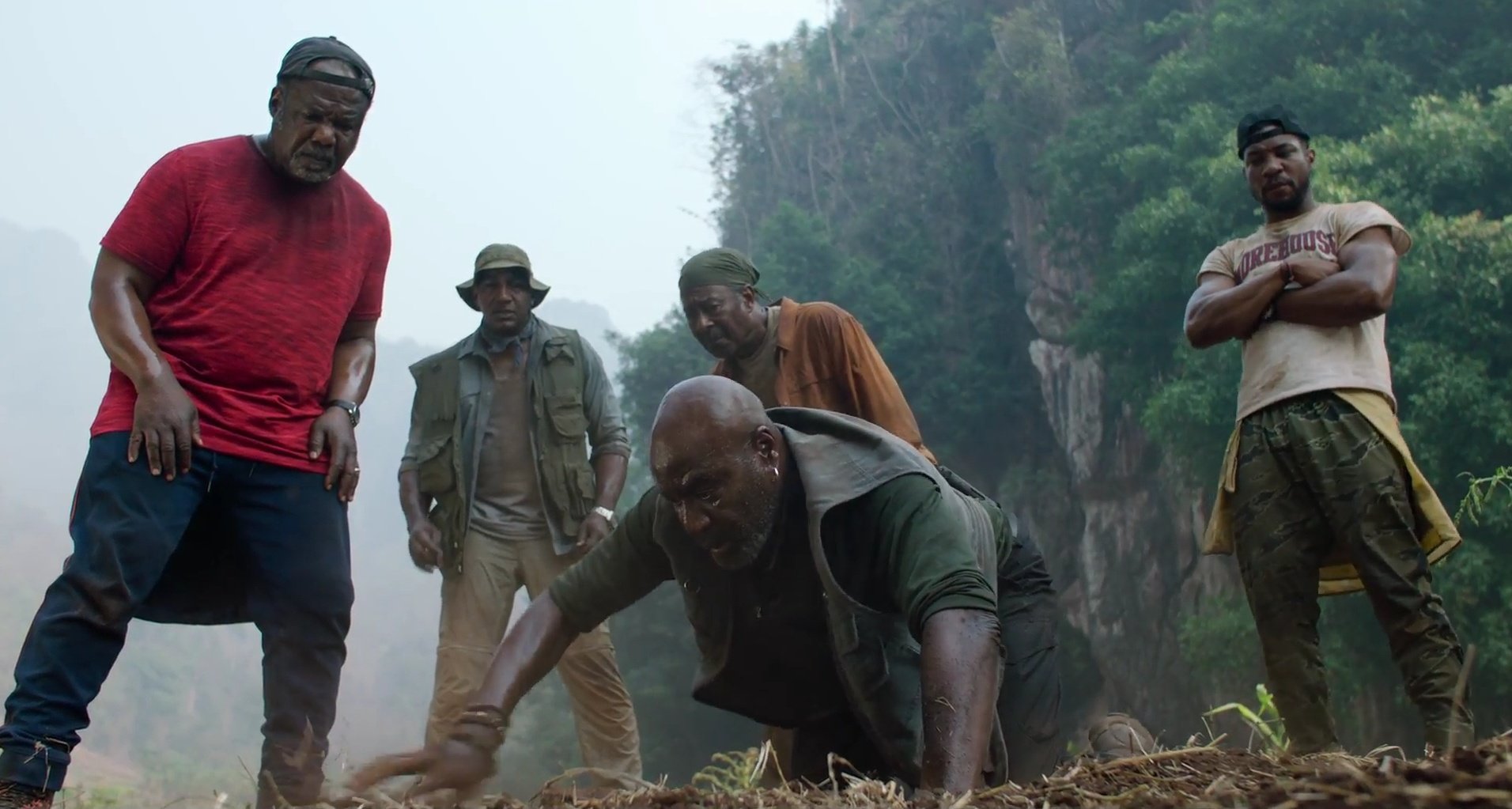 A shot from 'Da 5 Bloods' trailer. (Image via YouTube)

Spike Lee has made a career out of telling the stories that people didn’t want to hear. Sometimes it’s confrontational (Malcolm X or Girl 6), sometimes it’s funny (BlacKkKlansman or School Daze) and sometimes it’s heartwarming (Jungle Fever or Crooklyn, which is at least as heartwarming as a movie that has a scene with a nine-year-old sniffing glue can be). But no matter what voice Lee wraps his morals in, there’s always been an unflinching focus on racial tensions and class inequality presented through the eyes of damaged, often eccentric characters.

If making films since the Reagan era has a tendency to dull the righteous fury in you, no one told Lee. Actually, he’s only become more virulent to the injustices he sees in the modern world, discarding narrative ambiguity for a more explosive style of storytelling. Although Lee let you decide for yourself whether Mookie did the right thing in 1989, Chi-Raq and BlacKkKlansman have comparatively fewer shades of grey. After all, it’s hard to get more unequivocally evil than the Ku Klux Klan.

Which brings us to Da 5 Bloods, the new Spike Lee joint that finds four Black Vietnam veterans returning to Ho Chi Minh City in search of buried gold and the remains of their squad leader, “Stormin’ Norman” Holloway. Lee’s career is so dense and varied that this isn’t even his first war movie, but it does give the director a chance to pay homage to a very specific kind of genre film: the Vietnam movie.

[Even without the festivals, Pride Month marches on]

Lee isn’t necessarily interested in making his own Forrest Gump, Platoon or Apocalypse Now (which gets a visual reference in the first ten minutes) because he’d rather show the action from a different point of view. It isn’t patronizing (like Gump) or melodramatic (like Platoon) or inescapably dark (like Apocalypse), but instead it’s messy and funny and imperfect in its message, reflecting the war and the characters who fought through it.

The most engrossing of these characters is Paul, played by Delroy Lindo, the aggressive, problematic, thoroughly haunted linchpin to the Bloods’ mission. Paul is the searing heart to the film, rightfully scorned for the way he’s been kicked around after giving all he had to his country and receiving nothing in return. Through Paul, Lee gives a voice — and a sympathetic ear — to those who have faced so much systematic disenfranchisement that they are pushed to the point of, say, voting for Donald Trump. Lee doesn’t see this as a betrayal the way some of other Bloods do; instead he contextualizes Paul’s desire for change not as reactionary but as a result of a lifetime of oppression. Lee always liked to play with the ways seemingly similar people react to conflict in wildly different ways without explicitly taking sides, and Da 5 Bloods’ meditations on Black identity are pure, unfiltered Lee.

The filmmaking is as deft and rule-breaking as ever. Every time Lee ignores the 180 degree rule or refuses to make the older actors appear younger in flashbacks, you see the freewheeling auteur that treats his movies like playgrounds. Changing aspect ratios, rough edits, hard cuts: They’re all in plain sight, because the seams tell the story. Sometimes these come at the main story’s expense. Lee’s subplots involving Vietnamese radio hosts, French gold hunters and philanthropic love stories balloon the runtime, and his desire to have aspects of every genre, from comedy to drama to action, muddies the overall tone. But we all know Lee as a director who wields ambition like a fully loaded Uzi, spraying bullets of entertainment and powerful messages without regard to precision or accuracy.

That’s not to say Lee avoids the specifics. The timing of the film — while perhaps somewhat coincidental — is as impeccable as a movie focused on complex Black characters fighting for their lives and their due can be. Da 5 Bloods wasn’t released now because Lee somehow knew about the deaths and protests that dominate our current cultural landscape before they happened, but rather because Lee has been seeing these deaths and protests happening for years. We might be at a fever pitch now, but Black Lives Matter hasn’t existed for only two weeks, and Black Americans haven’t only been the victims of police brutality recently. Lee’s rhetoric in all of his films has an incendiary power, and here, the balance of socio-political insight with cinematic escapism gets put to the test.

Sometimes the movie pulls it off, and sometimes it doesn’t. The scene where the Bloods’ helicopter gets shot down with a grenade launcher made me laugh out loud due to its similarity to the climax of Tropic Thunder. The references in the dialogue to historical Black figures are mostly heavy-handed, and Lee’s trick of bringing direct attention to their clumsy inclusions by throwing up photographs and background information to purposefully disrupt the on screen action only works about half the time.

Still, when the material does find its voice, it stirs. Starting with a reference to Crispus Attucks, Holloway, played by Chadwick Boseman, sums up the film’s thesis at the half-hour mark: “We’ve been dying for this country from the very git, hoping one day they give us our rightful place. All they give us is a foot up our Black asses!” These kinds of polemics are nothing new to Lee’s work, and as arguably the world’s most famous Black director turns into his fourth decade of work, it makes you wonder just how many people have been listening.