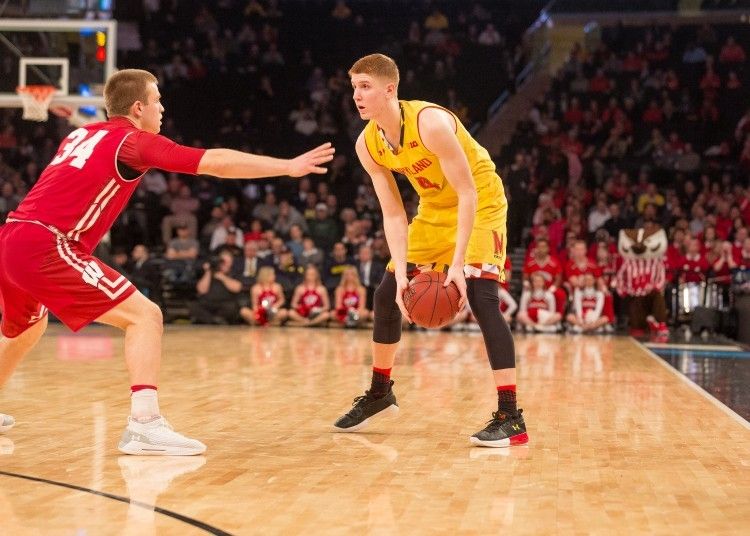 Guard Kevin Huerter scopes the court for an open teammate in Maryland’s 59-54 loss against Wisconsin in the first round of the Big Ten Tournament at Madison Square Garden. (Marquise McKine/The Diamondback)

Falling short of being included in the NBA’s plans to resume the 2019-2020 season in Orlando, the Atlanta Hawks played their final game on March 11, ending Kevin Huerter’s second season in the league.

The Hawks were crowded with young talent this season, including rising superstar Trae Young, John Collins, rookies Cam Reddish and De’Andre Hunter along with fellow Terp Bruno Fernando. Huerter still managed to make his presence known for the second straight season, building upon an impressive rookie year, in which he was named second-team all-rookie.

Huerter saw career-highs across the board this season, averaging 31.4 minutes, 12.2 points, 4.1 rebounds and 3.8 assists per game. He poured in a season-high 26 points against the Indiana Pacers on January 4.

“Red Velvet’s” best game of the season came on January 14 against the Phoenix Suns when he nearly notched his first career triple-double. Huerter grabbed a career-high 15 boards, dished out eight assists and scored 23 points on 8-14 shooting.

Huerter’s success this season came as the shooting guard’s role on the Hawks expanded. After starting 59 games as a rookie in the 2018-2019 season, Huerter had started all but eight of the games he played in this season.

Although Huerter won’t be able to finish his sophomore season, he certainly made a growing name for himself amongst fans in Atlanta and around the NBA. With the improvement he saw over summer 2019, he’ll look to continue his progression as a deadly shooter into the 2020-2021 season.