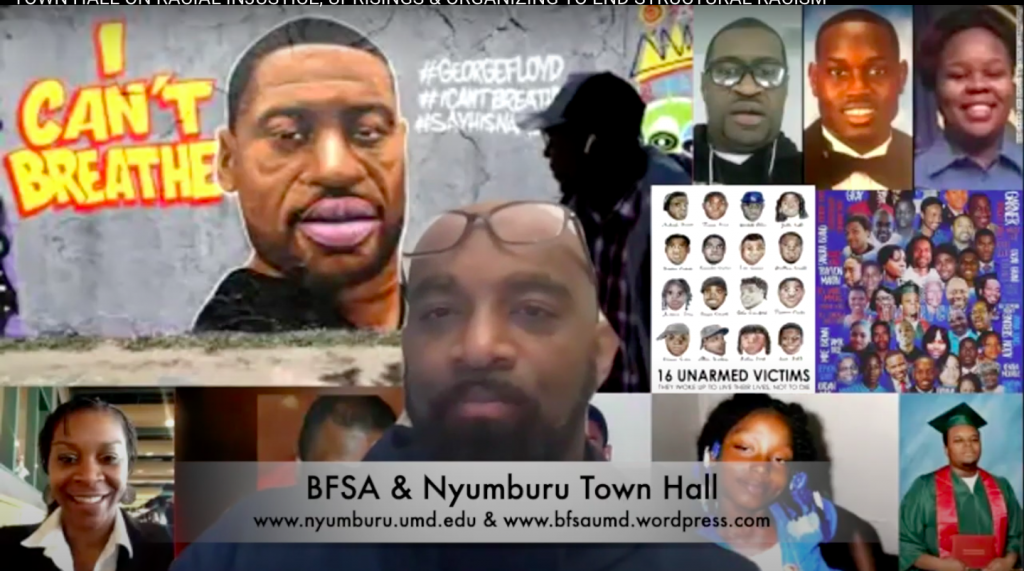 Solomon Comissiong was on his way to a basketball tournament with three friends when an unmarked police car pulled out in front of them. It was broad daylight.

“Do not move,” Comissiong said he told his friends. The officers climbed out of the car, “guns blazing” and curse words flying, he said. “Keep your hands on the roof of the car,” Comissiong told them.

After what felt like five hours, but was actually five minutes, Comissiong said the officers discovered his friend wasn’t the man they were looking for — someone suspected of committing a homicide in the public housing projects down the street from Comissiong’s house — and sped away.

The outcome might have been different, Comissiong said, if he and his friends hadn’t been so cautious. But he remembered what his mom told him shortly after he got his driver’s license: If a police car pulls you over, don’t make any sudden movements. Now, years later, he’s already having to have the same sort of conversations with his own 7-year-old son.

“There should be a certain amount of innocence that comes with being a child — that you don’t have to worry about folks who are quote-on-quote authorities who will hunt you down.” Comissiong said, his voice rising in anger. “It’s not right. It’s not right. And if we don’t stop it, it’ll happen again.”

At the start of Thursday’s town hall held by the University of Maryland’s Nyumburu Cultural Center and the Black Faculty and Staff Association to give space for people to express the emotions they’ve been experiencing over the past few days, Comissiong shared a quote from the novelist, James Baldwin: “To be black and conscious in America is to be in a constant state of rage.”

For over a week, this rage has manifested itself across the world in massive demonstrations against systemic racism and police brutality — what Comissiong, president of the BFSA, called, “domestic terrorism.” They were sparked late last month when a video of the agonizing final moments of George Floyd’s life began to circulate online. For eight minutes and 46 seconds, a white Minneapolis police officer dug his knee into the black man’s neck as he begged for his mother and wheezed, “I can’t breathe.”

At the town hall, members of the university community shared their own experiences with racism. Dr. Ronald Zeigler, Nyumburu’s director, reflected on the days of segregation, when he was pushed out of a bathroom by a white man in Virginia, instead directing him to the “colored bathroom” around the back of the building. Then Zeigler, then 12 years old, told his aunt what had happened. She directed him to “go back in there.”

“I don’t know if that was radical, but I went in there, used the bathroom, came back out,” Zeigler remembered.

And another woman, who didn’t give her name but said she works at the business school, grieved the conversations she’s been having with her 20-year-old son lately. She and her son’s father have taught him what to do should he ever be stopped by the police: Make sure you keep your hands visible. Make sure you show the officer respect. Don’t give them any reason to harm you.

But after watching the video of Floyd’s death, her son called her during his break at work. Together, over the phone, they cried. “What do I do now?” she said he asked her. “They’re going to kill us anyway.”

“That broke my heart, because that’s my baby,” she said at the town hall, her voice heavy with tears. “And I can’t imagine what I would do if he didn’t come home.”

Near the end of the meeting, Comissiong opened up the floor to a discussion about whether the university has been doing enough to support its black students, staff and faculty. He started the discussion by saying the university has done an “abhorrent job” so far, pointing to the findings of an external report conducted in 2018 that showed many black students routinely experience microaggressions and do not feel safe or comfortable on the campus.

“We can’t talk about other places unless we clean up our own neighborhood, our own community. And that starts at the University of Maryland,” Comissiong said.

In the last few days, department deans and university officials have released a flurry of statements, expressing grief over the killing of Floyd, Ahmaud Arbery, Breonna Taylor and all who came before them, and promising that they stand in solidarity. On May 31, a campuswide email signed by 13 university leaders asserted the school must be “even more committed to creating an inclusive, respectful, and supportive environment, and follow-up with actions that will help shape a more just and equitable campus community and society.”

But reading these statements has only made Traci Dula, associate director of the Honors College, angrier. Frankly, she said, it’s “bullshit, for the way they treat their staff on campus.”

“So many of us experience knees of our white administrators on our proverbial necks,” she said. “There are people who get away with so much crap, and then they continue to stay in their positions — the university doesn’t remove them, their direct reports don’t remove them.”

“I’m getting to a point where I’m just nauseated with it,” she said. Though she said she doesn’t have a direct answer about what the next steps look like, she added that from where she stands in her own department, the waters are troubled.

Georgina Dodge, the university’s diversity and inclusion vice president, also attended the town hall. In a statement sent by a university spokesperson, she wrote that everyone has a responsibility to “work collectively in the fight against racial injustices” — whether that be participating in training and education offered by the Office of Diversity and Inclusion or seeking the support of Bias Incident and Support Services.

The trauma and experiences shared by community members are real, Dodge wrote, and stem from childhood, in some cases.

“Some of the stories I heard are all too familiar, aligning with my own experiences,” she wrote. “Healing and justice are what we need, along with conscious action to end anti-Black racism.”

Dula also described a recent experience in her own department, when two of her white colleagues reached out to her over email after failing to recognize an incident of implicit bias as racism. She took them to task, she said, telling them that they need to call that sort of behavior out when they see it.

“The problem that I see with our wannabe white allies is that if the n-word is not being used, if there is not a smoking gun, they can’t see it as racism,” she said. “I’m tired of having to defend myself and then, because I defend myself, I gotta make you feel better about it. I am over that shit. I am over it.”

And Celina Sargusingh, a clinic coordinator at the health center, chimed in with her own frustrations about people justifying poor behavior by pointing to their relationships with black people. How could they be racist, they say, when they have a black niece or friend? But all of that justification, Sargusingh said, takes them longer than it would for them to put in the work and learn how to be anti-racist.

And Thursday’s town hall is just the beginning, Comissiong said. Moving forward, Nyumburu and the BFSA plan to host two town halls each month, along with teach-ins and webinars on how to constructively organize against systemic racism.

Comissiong says these future meetings will elaborate upon the history of domestic terrorism and government-sponsored violence against black people. Context is everything, Comissiong emphasized, and the killings of Floyd and so many others did not occur in a vacuum.

But the anger is out, he said, applauding the young people who have taken to the streets to protest, even in the midst of the coronavirus pandemic.

It appears, he said, that George Floyd’s death “has awoken a sleeping giant.”