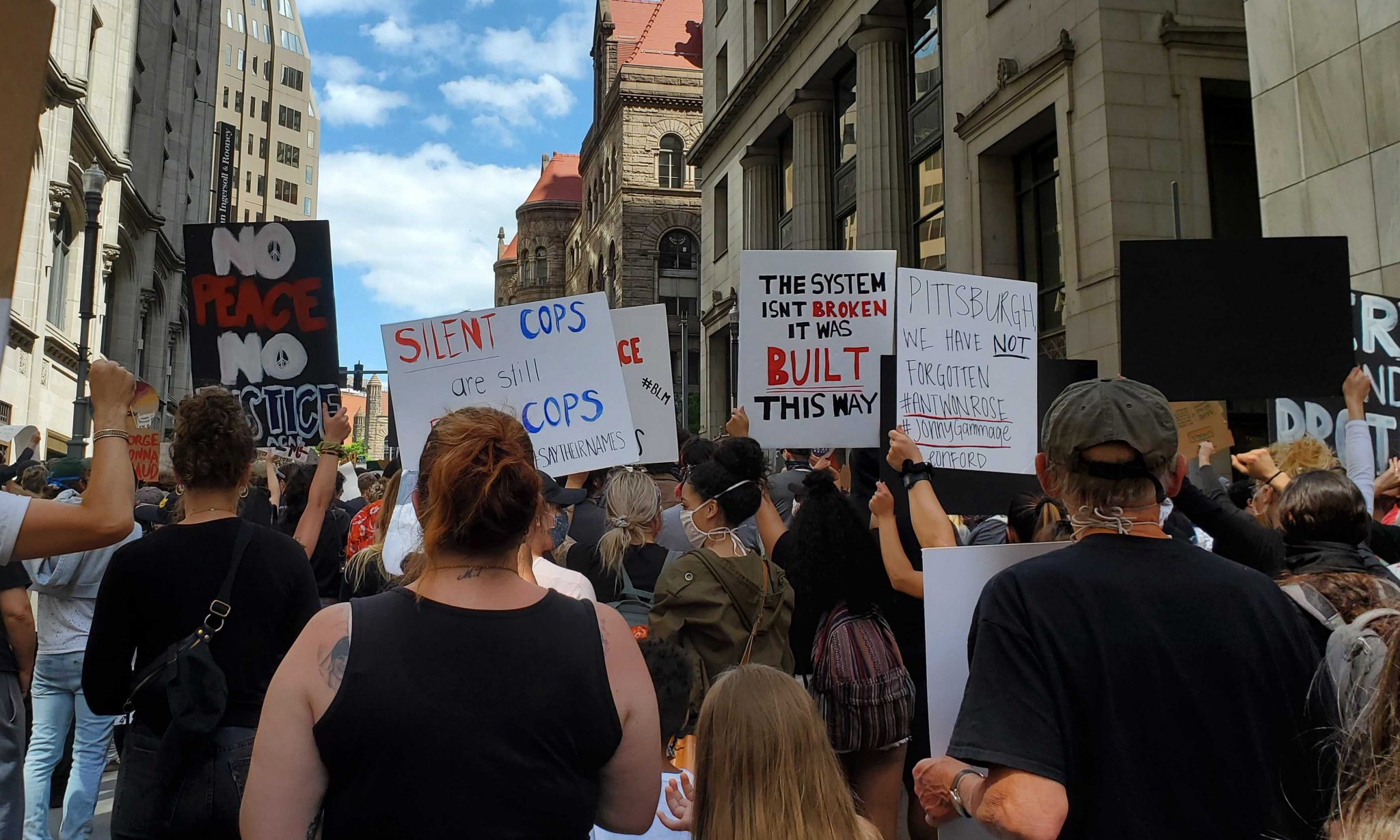 Protests against systemic racism and police brutality have spread across the country following the killing of George Floyd in Minneapolis. (Angela Roberts/For The Diamondback)

Deion Stewart was 12 years old when Trayvon Martin was shot and killed by a Florida neighborhood watch officer.

The officer claimed self-defense, but Martin, a 17-year-old black boy, didn’t have any weapons on him. He had a bag of Skittles and a full can of Arizona iced tea in his pockets. Stewart ate Skittles and drank Arizona iced tea, too, he said. He also wore hoodies like the one Martin was wearing when he died.

Stewart remembers the talk his dad gave him after Martin’s killing. He explained to him what it means to be a young black man in America — that “your skin color does play a role in pretty much everything you do.”

“It’s crazy to me,” Stewart said. “That you could just have that much hate for a person because of the color of their skin.”

Now, Martin’s name is one of many displayed on signs and banners held aloft by protesters across the country — and the world — to condemn police brutality and systemic racism. Say their names, the crowds demand: George Floyd. Ahmaud Arbery. Breonna Taylor. Freddie Gray. Eric Garner.

Stewart and other University of Maryland students have joined in on the demonstrations, which were sparked by the killing of George Floyd, a 46-year-old black man. Floyd died May 25, after a white Minneapolis police officer kneeled on his neck for more than eight minutes while arresting him.

Some students have attended protests in person, while others have taken to social media to promote fundraisers and other resources for justice. But even as they mobilize against racism, many in the university’s black community have been left feeling emotionally exhausted as they grapple with yet another series of deaths.

Elonna Jones, a 2020 graduate and current president of the university’s NAACP chapter, wrote in a statement that she is feeling pain, as well as pressure to speak out against oppression as a black person and as a student leader.

People in places of privilege — who will simply be heard without having to try to make others hear them — should also feel overwhelmed with a sense of duty at this moment, she wrote. She charged these people to support organizations against police brutality and “shine light on the experiences of the oppressed.”

Jeyla Brown, a rising senior economics major, said she’s been learning about racial injustice since she was a little girl. And now, she’s watching history unfold on social media, she said.

Seeing the packed streets has been powerful, Brown said. Especially because the country is still in the middle of the coronavirus pandemic — a public health crisis that has disproportionately devastated black and other marginalized communities.

“People don’t even want to go to the grocery store for COVID, but they will literally go stand in a massive protest for black lives,” she said.

Stewart, a rising junior information science major, protested in Washington, D.C., over the weekend with a group of friends, wearing a face mask and a hoodie. He took to Instagram Live to share the demonstration with those who couldn’t make it. Chants of “no justice, no peace” echoed throughout the night, and protesters passed around water, he said.

Logan Davis, a rising junior criminology and criminal justice major and a Black Student Union cabinet member, said on Tuesday she planned to attend a demonstration. Protesting is a way to have voices heard, and showing up in numbers speaks volumes, she said.

“I’m exhausted that in the year 2020, black people, we’re still fighting to prove that our lives matter,” Davis said.

Others, though, are forging the fight for justice far from city streets. Brown, who can’t attend any protests because she is immunocompromised, has taken to social media to offer educational resources, along with her personal perspective as a biracial woman.

She’s shared resources that emphasize the importance of learning about racial injustice and voting, and she’s posted about ways to support the Black Lives Matter movement for people who aren’t able to donate.

“I’ve just been trying to tell people that we don’t need to wait for something to hit the headlines to be active,” she said. ”There are things we need to be doing on a regular basis outside of our social media trends to help our community.”

As social media was swarmed with resources and information for protesters and activists, Ndjib took a few moments on Sunday to pen her own words in an Instagram post, describing in stark white letters her experiences as a black woman at a predominantly white institution.

“That feeling that people feel when they’re outside marching, that feeling of being unseen on that bigger scale, is the same feeling that you feel in your college space,” she said. “That’s the same exact frustration a lot of people have.”

While Ndjib said people are rightfully motivated to protest against police brutality, she emphasized that black people also experience racism in much less overt ways. Even less obvious actions — such as talking over people of color in group projects or going out of your way not to sit next to someone on university transportation — are noticed, she wrote.

“Be aware of your actions and correct these conscious and unconscious biases when they occur,” she urged people in the post, which has been shared over 300 times as of Wednesday. “While some of you can opt out, a lot of us are forced to always be tuned in.”

Like Jones, Pauline Sow, incoming vice president of the Black Student Union and diversity and inclusion director for the Student Government Association, has also felt overwhelmed lately — especially after seeing the video of Floyd’s death posted over and over again on social media. She described the burden she’s been feeling to be there for her community while at the same time educating others on how to best fight racism.

For those who feel driven to take action right now, Sow said one of the best ways to do so is to educate yourself on the history of race in America. It’s also important to take the initiative to learn on your own, rather than expecting black students to educate you, she said.

“People might think that black people popped out of the womb, and we just knew all of this history,” said Sow, a rising senior dance, economics and government and politics major. “Which, you know, didn’t really happen. We were also taught this. And we were taught this just from experiencing it.”

Black students learn from their parents, but also from documentaries, books and classes. They take it upon themselves to educate themselves, Sow said — and others should too.

“You can’t ask people to educate yourself, especially when they’re still educating themselves,” she said. “You kind of have to take your own journey.”

It’s okay to make mistakes — so long as you keep trying, she said, and stay mindful of the end goal of equal rights for black people. Ask black organizations what they need, and think about what your role will be in the long term.

“We can’t just keep reposting stuff forever. Protests aren’t going to keep happening forever,” Sow said. “When we’re back on campus, what are you going to do?”