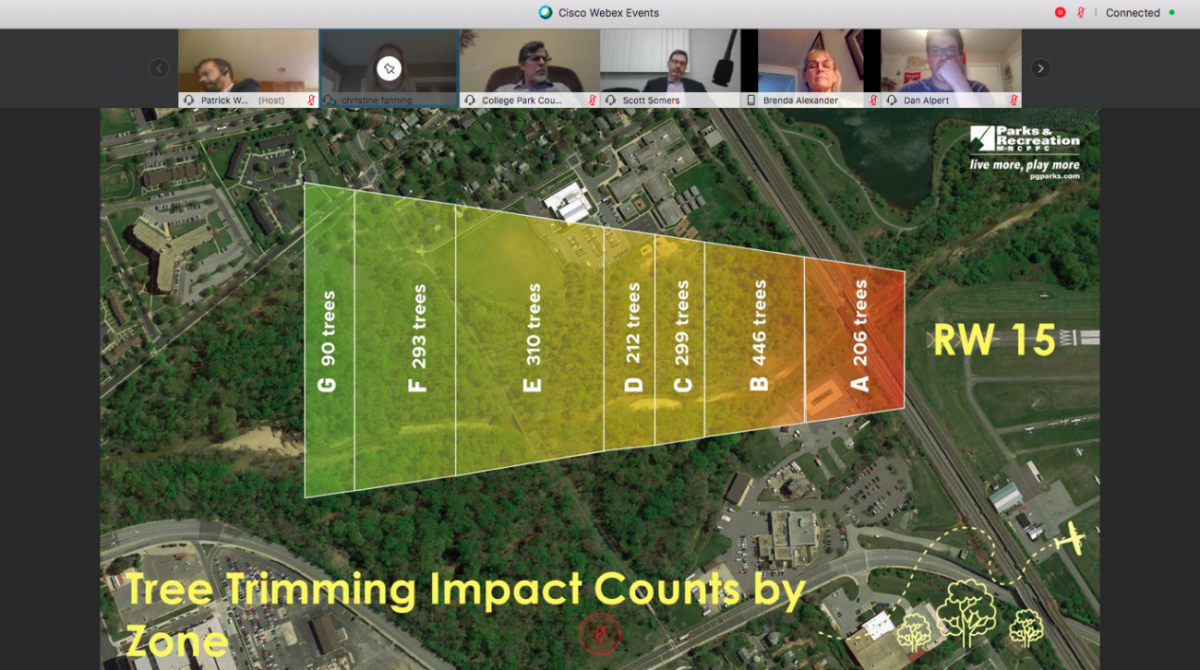 The College Park City Council discusses tree trimming at the College Park Airport during its meeting on May 19, 2020. (Clara Niel/For The Diamondback)

The College Park City Council made progress Tuesday night in discussions with the city’s airport over a revised plan for tree trimming and replanting in the area.

Earlier this year, officials charged with trimming trees by the airport instead removed over 250 of them, citing concerns that they would not survive the pruning and could prove hazardous to pilots landing at the airport. However, at a council meeting in February, council members and residents expressed frustration with the action, claiming they’d been misled.

On Tuesday, though, the Prince George’s County Department of Parks and Recreation presented revised plans for the tree trimming and replanting project, which it had altered to include more detail after listening to concerns of the city. District 3 Councilman Robert Day expressed his gratitude for the turnaround.

“You guys listened. You actually took the time to hear what the community and what the people around you were saying,” Day said. “That is the key communication we needed so that we can work to finish things much smoother in the long term.”

Christine Fanning, the county department’s division chief for national and historical resources, emphasized that a stronger relationship between the city and the department could have helped avoid much of the confusion that occurred earlier in the year. Fanning expressed favor for creating a partnership between the two that was “more proactive, not reactive.”

The revised tree trimming plan states that approximately 3,000 trees will be trimmed in a way that follows Federal Aviation Administration requirements. Additionally, from here on out, Fanning said the trees will be trimmed every four to five years. Before the recent trimming project, the trees had gone eight years without being pruned — on the longer end of state tree trimming regulations, which advise trimming every four to eight years.

Furthermore, a total of 1,510 trees will be planted in the city and surrounding area, 900 more than required by regulations dictating how many trees must be replanted per tree removed. According to the plan, for every tree removed, four will be planted. The city is currently working to replant 120 trees and is slated to add 570 more in the fall.

Both trimmed and replanted trees will be monitored biannually to keep track of how well they’re doing, according to the plan.

District 2 Councilman P.J. Brennan, for his part, reminded officials of one of the council’s ultimate aims.

“I hope one of our end goals here is to restore the canopy as much as possible to the original scenario,” Brennan said.

In her presentation, Fanning said 70 percent of replanted trees would go toward this effort. However, she also expressed concern about the city’s apparent disconnect to the airport, a historic site.

District 3 Councilman John Rigg agreed. There’s a lack of awareness of history and appreciation for the airport, he said. Instead, residents tend to see it as something that causes a commotion from time to time.

“What I did hear, and it won’t surprise you to hear this, from a lot of residents as the trees went down was, ‘Why do we have that darn airport anyway if we lose all our trees every few years?’” Rigg said.

Airport manager Lee Sommer said he, too, is worried about how underappreciated the airport is. However, he expressed hope for its future — plans are in the works to incorporate the site into the surrounding community and school system, making it “a jewel in the neighborhood” again, he said.

“When people come out, they’re going to be able to have access to something that they probably didn’t even know exists,” Sommer said. “We’re hoping that that’s going to show to residents that there’s a lot more going on than what they think is going on.”