“It feels like a void”: Grief through the eyes of one UMD student in the age of COVID-19 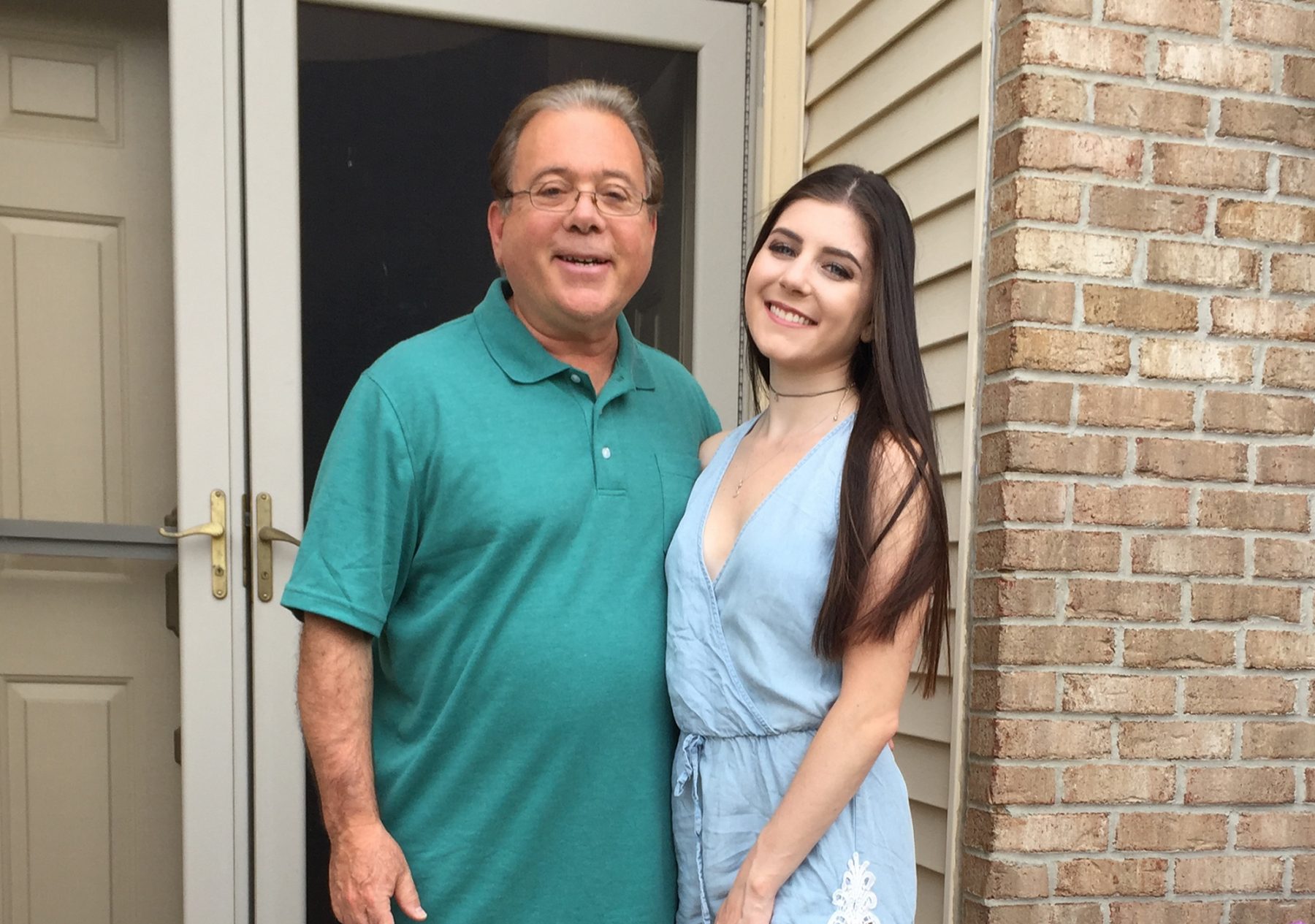 Last Wednesday marked a grim milestone for Saige Kratenstein: a month had passed since she lost her father due to complications related to COVID-19.

The last few weeks have felt hazy, she said. The nights, when she no longer hears his footsteps echoing through the house, are especially lonely.

“It just feels like a void,” she said. “And it’s going to be like that for the rest of our lives.”

As of Tuesday evening, more than 92,000 people in the U.S. have died of the disease caused by the novel coronavirus. Although some states have recently begun to reopen cautiously, the majority of these deaths have been mourned under edicts warning against large gatherings — including those that often accompany the loss of a loved one.

In addition to grieving her father’s death, Kratenstein — a junior marketing major at the University of Maryland — also had to stay on top of finals and projects. A couple weeks after his death, Kratenstein emailed one of her professors, asking for accommodations. She was met with a response she didn’t expect.

“Try to get it done on time. That would be much better. I’d like to be consistent with all students because there are many who are having difficult times.”

Angry and confused, Kratenstein posted a screenshot of the message on Twitter last month. She later added a screenshot of another message from the professor in which they encouraged her to attend a lecture on the day of her father’s funeral, saying it could take her “mind off things.” Kratenstein wasn’t having it. In all caps, she demanded that the university “DO. BETTER.”

The tweet quickly racked up thousands of retweets and likes, with hundreds expressing outrage and sympathy in the replies. Soon after the tweet went viral, the university reached out to Kratenstein and offered accommodations. Kratenstein felt a bit comforted by this — she had stirred the pot.

But her father’s absence still looms, enveloping her family in what is already a time of incredible uncertainty.

“Pain in my heart”

Though a nurse called the family the morning of April 13 to discuss a do-not-resuscitate order, they didn’t say Alan Kratenstein was expected to die that day. But somehow, Kratenstein and her family knew it was the day — they could feel it in their bones.

For weeks, Kratenstein’s father, Alan Kratenstein, had lain in a hospital bed. He coughed so intensely he couldn’t speak, and he was later put on a ventilator. He developed a blood clot, too, and was put on dialysis after one of his kidneys started to fail.

She was in the shower the second time the hospital called that day but ran out when she heard her mother and sister screaming. Her heart shattered when they told her. Grief taking over her body, she fell to the floor.

“I don’t think I’ll ever forget that moment, just because it was horrific,” she said. “I wouldn’t wish that on anybody … When I think about that moment, I feel the pain in my heart.”

Research shows that social support immediately after the death of a loved one is essential during the grieving process, said Karen O’Brien, a psychology professor at this university. Normally, she said, she’d advise people to offer tangible company to those coping with a loss. But a global pandemic isn’t exactly accommodating to this sort of support.

And, as Kratenstein’s family discovered, it’s not accommodating to large funerals, either.

Her father’s funeral was held a week after his death, Kratenstein said, in the same place in Queens, New York, where his parents are buried. In normal times, she says he would have been remembered by a ceremony that included plenty of friends, not just immediate family.

Instead, it was cold. The ceremony didn’t last more than 15 minutes. Beside the Kratenstein family, only a few friends were allowed to attend — few enough to stay within the 10 person limit. As the rabbi led prayers, the Kratensteins and their friends couldn’t hug one another or even stand close together.

When it was time for Kratenstein to give a eulogy, she struggled to get the words out. Looking at the small gathering ahead of her, she said she felt like her father deserved so much more. So many people loved him, she said.

After the funeral, Kratenstein said, the smallest tasks felt difficult to complete. She told her professors she wasn’t sure if she had the emotional stability to jump right back into work — she didn’t have motivation to do anything. Day after day, she sat on the couch alongside her mother and sister, staring at each other. They just felt so lost.

The one thing they could do — that they had to do — was make phone calls, notifying people of his death. They followed his traces: canceled his phone bill, his health insurance, his car insurance. They called his patients and the landlord of his office. It was overwhelming, Kratenstein said.

“Every time you say the words, it just hits harder,” she said.

A day after her father’s funeral, Kratenstein tried to dive back into her coursework, but a wave of anxiety swept through her.

But, at random times, the grief would hit her. Then, she would sob.

When a student is grieving, they may have difficulty concentrating and sleeping or feel exhausted and unmotivated, O’Brien wrote in a message, all of which may make it hard for them to study or complete coursework.

This semester, when O’Brien found out that one of her students had lost a loved one, she reached out to them, offering condolences and accommodations for upcoming assignments. She also checked on them throughout the semester, she said, letting them know she was thinking about them.

“It’s important for professors to be understanding when students experience the death of a family member,” O’Brien said.

Even so, Kratenstein said she knew she had to go back to studying eventually. Her father would have wanted her to do so — she said she gets her hardworking attitude from him.

On May 1, the university tweeted out a statement that has since been deleted, reaffirming its commitment to its students.

“Since our move to online learning during this ongoing pandemic, our faculty have received guidance to provide accommodations, flexibility and compassion to students during these challenging and unprecedented times,” the statement read.

But even though the university has offered her a few extra days to complete her finals, Kratenstein isn’t sure how well she’ll do this semester. She also worries that her professor hasn’t faced any repercussions.

A university spokesperson declined to comment on any outcomes for the professor, as the university cannot comment on specific personnel issues.

Kratenstein also emphasized that the university’s statements and messages shouldn’t be necessary. Professors shouldn’t have to be encouraged to accommodate students, she said.

“Professors should be more compassionate and sympathetic and understanding,” she said. “Health and family come before school and academia.”

With information about the pandemic constantly swirling, Kratenstein has stayed away from the news. It’s been too painful, she said. And she’s fed up with skepticism circulating about the virus and the jokes that she sees on social media.

“You really need to get a haircut that badly? I’m sure you could cut your own hair, if it’s that bad,” she said.

Good news doesn’t bring much comfort, either. Most of her friends have stopped sending articles about the coronavirus, she said. One of them recently sent a story about progress toward a vaccine, but even that didn’t lift her spirits. Even if a vaccine is developed, it doesn’t matter at this point. It couldn’t save her dad.

It is not yet known how the constant pandemic news cycle is affecting those who have lost loved ones to COVID-19, O’Brien said. For some, the constant reminder of the disease that killed their relative or friend may just bring up the pain, she said. Others, though, might feel like their pain is being acknowledged.

And even though the pandemic has prevented people from offering comfort in person, O’Brien said there are still ways to be there for those who are grieving. She suggested people reach out over the phone or Zoom and offer to talk — either about the loss or a different subject. Or, they could order food from the person’s favorite restaurant.

But even though the death of a loved one is a profound loss, O’Brien noted people will find ways to move forward, even during a pandemic.

“Humans are resilient,” she said.

For Kratenstein, her dog, Lola, has brought her comfort. Her father loved the dog, she said. The two of them would often walk her in the park together.

Her uncle and aunt have also been keeping the family company — even if from 15 feet away. Two or three times a week, they come by Kratenstein’s house. Sitting across the deck from one another, they talk about the little things. They laugh and try not to cry.