“In God’s hands”: How UMD’s religious communities are keeping the faith amid the pandemic 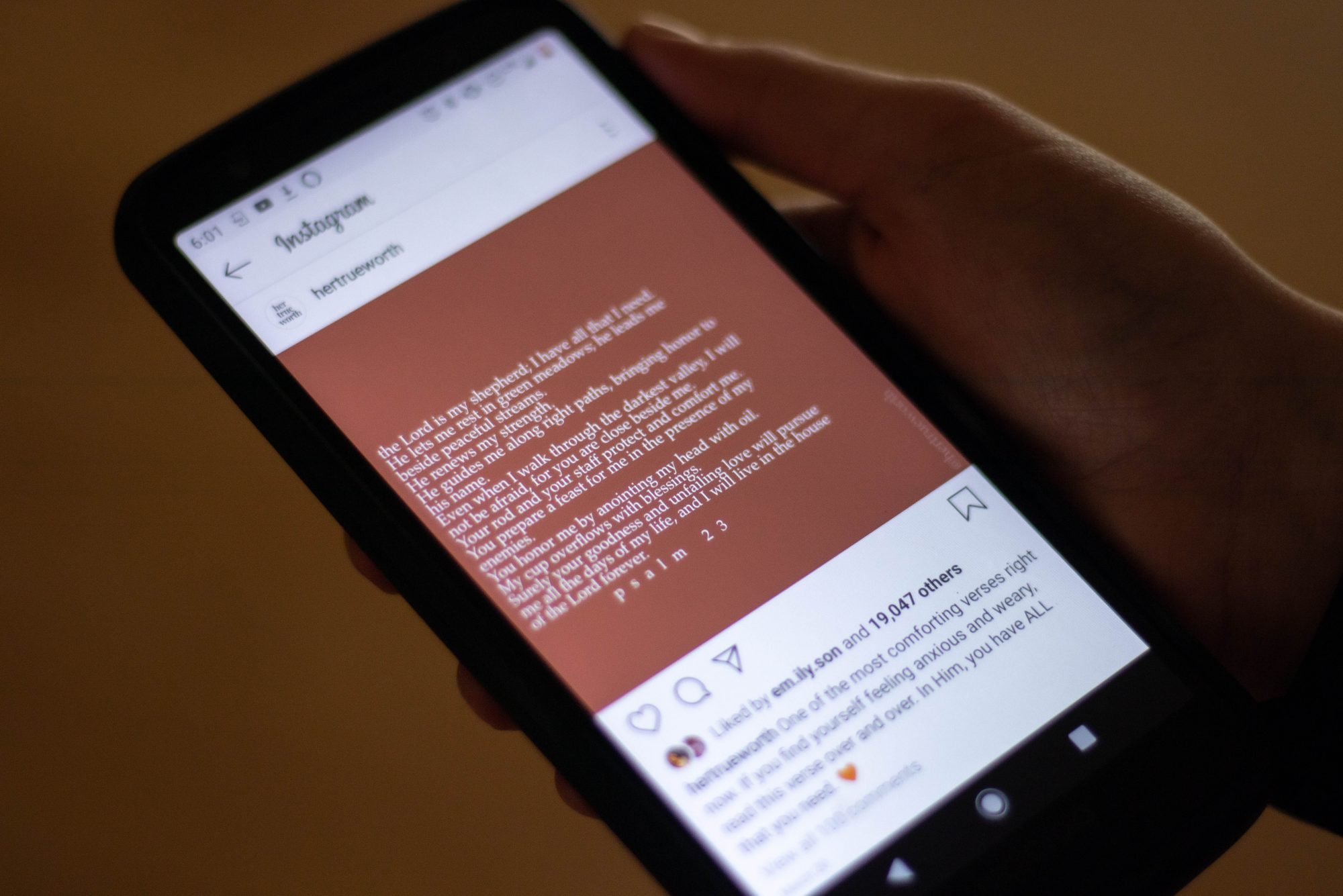 While the coronavirus pandemic has forced students to stay away from their usual places of religious worship, some use social media and online service-streaming as a tool. (Julia Nikhinson/The Diamondback)

Sitting quietly in her bedroom before she goes to sleep, Julia Caspero reads her Bible. She pages through the text, looking for where she stopped the previous night.

She’s felt helpless lately. Her days have been filled with a sense of loss, of lingering uncertainty. She prays, seeking guidance on how to live in the time of coronavirus.

“I still get anxious and I still, you know, worry about what’s going to happen to the world or to the people that I love because of this,” said Caspero, a sophomore government and politics major at the University of Maryland. “But I know … everything is in God’s hands.”

As COVID-19 rips through communities across the globe, entire cities, even nations, are on lockdown. The world is grieving — for the deaths of loved ones, for experiences that will no longer be lived, for routines and structure.

It’s a time when many people of faith are leaning on their beliefs to ground them. But directives to stay at home and practice social distancing have changed what that looks like: In an effort to suppress the spread of the virus, places of worship across the country have shut down, preventing people from physically congregating.

Even so, religious students like Caspero at this university say their faith has been keeping them centered and grounded — even at peace. The idea of having a higher power watching over them brings them guidance and comfort.

“Even if things seem hard, it’s going to be okay,” said Chinmayi Pamala, a junior physiology and neurobiology major who practices Hinduism.

Hannah Shraim, a senior business management major, used to carry a foldable prayer rug in her backpack as she walked around campus. Multiple times a day, she and her friends would stop whatever they were doing and walk to a prayer space inside Cole Field House.

The prayer room, with its carpeted floor and Arabic calligraphy pieces hanging from the walls, is a comforting place to be, Shraim wrote in a message. On most days, a smaller group of worshippers — sometimes no more than 20 — would gather in the room, she said.

Now, Shraim prays with her family at home. But with a smaller community, it’s not the same.

“In Islam, we believe that you can’t be alone in practicing your faith,” she wrote. “There’s something beautiful about being with other people in the name of remembering and devoting yourself to God.”

As an American and a Muslim, Shraim said pressure from the political climate that surrounds and connects her two identities makes her feel like she’s living under a microscope — like everything she does is representative of how people view not only her, but her community. But being in the prayer space energized her on a campus where her faith is in the religious minority. Being there, she didn’t feel alone.

Shraim is the secretary for the Muslim Students Association, an organization that often plans events to bring together Muslim students on campus. She serves as a mentor to high school girls who practice Islam, too. Community and service — two mainstays of her religion.

Now, without engaging in-person with either, she said she feels isolated. She is still connected with her community online — it’s just different.

“It’s been harder to focus in prayer, it’s been harder for me to fulfill everything to the level that I was before, because when I was feeling spiritually down, I had so many people around me to lift me up,” Shraim said.

Pamala used to pray in her dorm room on campus, sitting still and with her back held straight. On her desk, she keeps a small statue of Ganesha, a deity revered as the remover of obstacles in Hinduism.

“Sometimes, like, in the morning when I get up, I’ll just look at it and just kind of say thank you,” Pamala said.

While Pamala doesn’t have a set schedule for her temple visits, she goes every once in a while, she said. She and her family were supposed to go to one together March 29, to take part in a puja — a Hindu ritual of prayer and worship. They had scheduled the ritual with a priest about a month ago, planning to bring fruits, flowers, milk and honey as offerings.

They’ve since called it off, though. Even though the priest had said they could still come if they wanted to, Pamala’s family just doesn’t want to take the risk.

Now, Pamala prays with her family at their home in Frederick, in a room dedicated to worship. There, alongside other prints of Hindu gods and goddesses, a print of Ganesha sits, covered in bright shades. Some of the pieces of art have been with her family for so long, Pamala isn’t sure where they came from.

In the mornings, Pamala and her family light oil lamps in the room. In Sanskrit, they pray for prosperity, health and happiness. Now more than ever, Pamala says her religion has kept her grounded.

“It’s always been a source of comfort to know that there’s a higher power watching over you,” Pamala said.

Ben Gonzalez, a senior majoring in computer engineering and journalism, is set to graduate this December. He just started going to the Maryland Hillel regularly two semesters ago.

Growing up in Harlingen, Texas, Gonzalez — who is Salvadoran — became used to attending synagogue with people who looked like him. Adjusting to life at this university took some time for him, and it was a while until he became comfortable enough to join the university’s Jewish community.

“I don’t look like other Jews on campus,” he said.

Gonzalez started going to the Hillel after becoming friends with another Jewish student who shares his heritage. He’d attend Friday services at the community center — led by Ometz, a Jewish student group on campus — and engage in discussions about the interpretations of Torah readings.

It was one of his favorite parts of the service. Seeing how much knowledge his peers had and how much research they’d done into their religion — it was incredible.

Now, at home, he watches a livestream of his rabbi on Saturdays. In the midst of so many changes, it’s nice that one thing can stay the same.

“Just having the routine to fall back on is really comforting,” he said.

Today, even with things in a constant state of upheaval, Caspero continues to listen to sermons from her pastor every Sunday morning. She just does so online.

Before the coronavirus took over the country, Caspero said praying for the ill wasn’t a focal point of sermons at her church. Recently, though, she listened to her pastor’s message on finding peace in the midst of a pandemic — she recalls him saying God would not give people something they couldn’t handle.

Caspero also follows Instagram accounts that post Bible verses, reminding her that it’s all right if she doesn’t have all the answers. She came across one recently, quoting Psalm 23:4.

“Even when I walk through the darkest valley, I will not be afraid, for you are close beside me.”