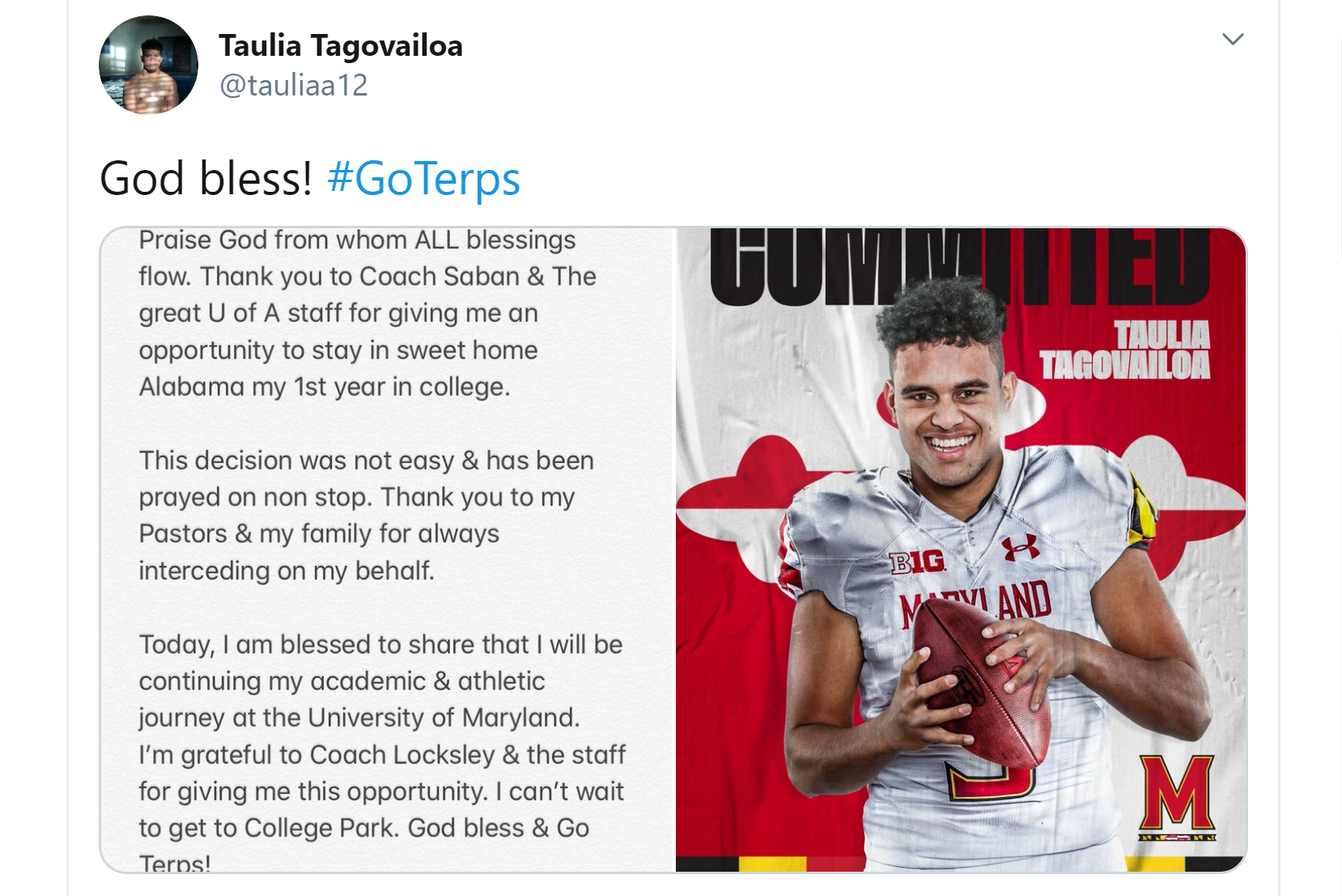 Former Alabama quarterback Taulia Tagovailoa announced on Twitter on May 15 he would transfer to Maryland football. (Screenshot vis @tauliaa12 on Twitter)

Maryland football’s struggles with quarterbacks are well chronicled at this point. While a number of promising arms have made their way to College Park, a plethora of injury problems — as well as an inability to compete for top-tier names — have made the position unstable.

However, that may have just changed. Last Friday, Taulia Tagovailoa, the younger brother of now-Miami Dolphins quarterback, Tua, announced his intent to transfer from Alabama. And after a week of speculation, the former four-star recruit made his decision, committing to Maryland late Friday on Twitter.

Tagovailoa’s connection to College Park comes largely through coach Mike Locksley, who was on Alabama’s staff for the first year of Tua’s tenure in Tuscaloosa. Taulia committed to a then-Locksley-led Crimson Tide offense in April 2018 but saw the regime change when the coach moved back to Maryland. Still, the connection appears to have remained strong enough so that Tagovailoa could be swayed to join the Terps.

The 5-foot-11 gunslinger only attempted 12 passes during the 2019 campaign, completing nine for 100 yards and a touchdown. He was relegated as a freshman to backup duty, sitting behind his brother — and another quarterback — on the depth chart.

He comes to Maryland in a similarly crowded field. The Terps have senior Josh Jackson as well as highly-rated Lance LeGendre at the position. Although both endured mixed seasons in 2019, there appears to be plenty of competition for snaps. However, Tagovailoa would have to sit out the 2020 season unless he receives a waiver from the NCAA. Should that happen, Maryland will have a three-way competition at the position.

Maryland had already been at work at the position this offseason, adding Evan Lewandowski from D-III Wisconsin-La Crosse. The Lake Zurich, Illinois, native aired it out for 2,804 passing yards and 28 touchdowns in 10 games last fall.

Once Tagovailoa is eligible to compete for Maryland, he’ll add to a promising 2021 class of newcomers. Locksley’s assembled unit ranked No. 13 in the country, according to 247Sports, and No. 5 in the Big Ten.

In addition, one of Tagovailoa’s potential targets will be class of 2020 wideout Rakim Jarrett, a five-star pass catcher who joins a receiving corps already featuring several standouts, such as Dontay Demus and Jeshaun Jones.

While the Terps still have work to do to improve Locksley’s cohort next season, they just got a big boost at a crucial position. And he might just bring a bit of stability, too.