UMD’s GSG revises bylaws in penultimate meeting of the semester 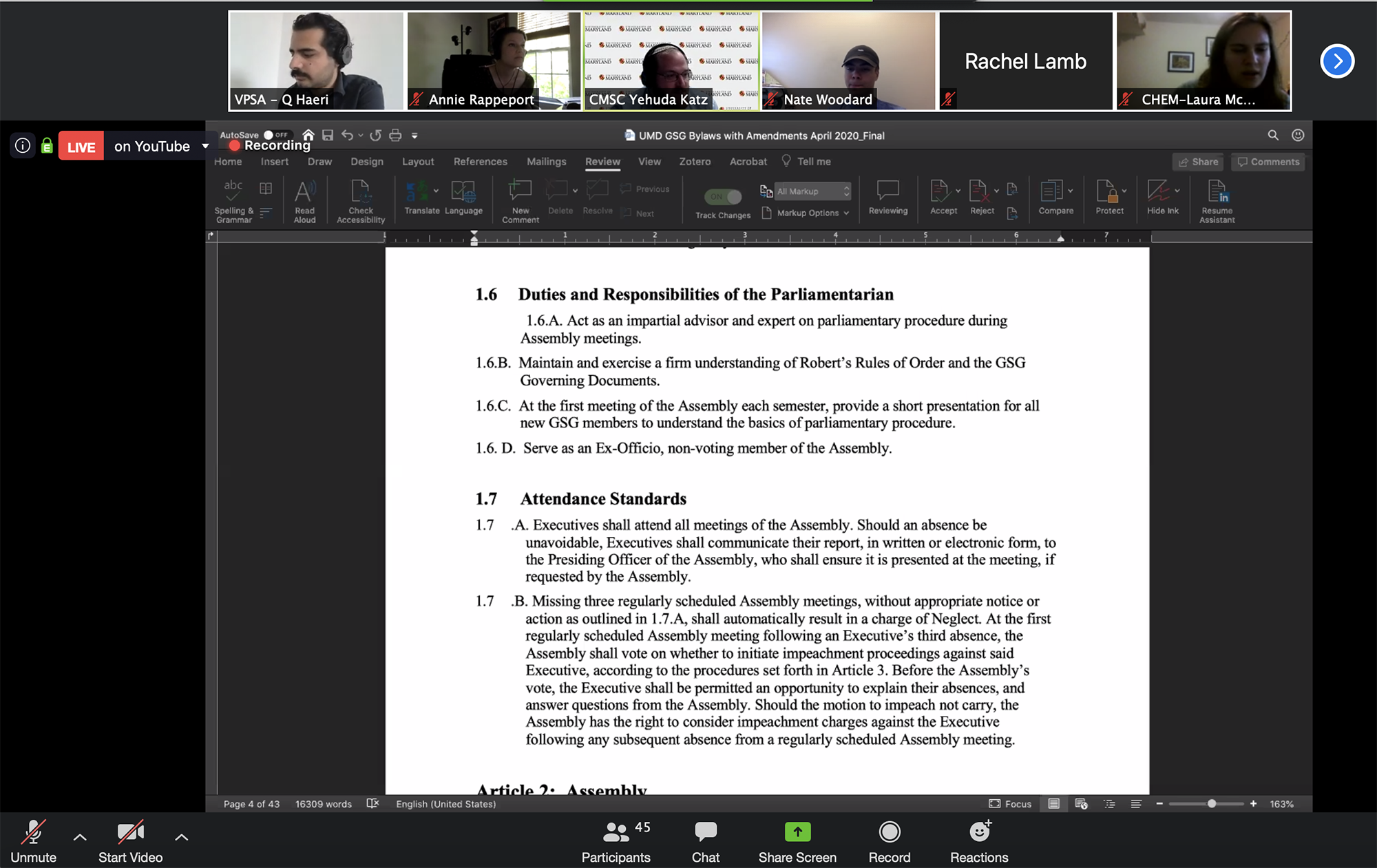 The University of Maryland's Graduate Student Government meeting on May 11, 2020. (Clara Longo de Freitas/For The Diamondback)

The University of Maryland’s GSG revised its bylaws at one of its last meetings of the semester Monday afternoon, realigning the document with changes made to its constitution last month.

Representatives voted unanimously to adjust clauses in the bylaws regarding the Graduate Student Government’s executive board, introduce new committees and clarify language surrounding subcommittees. The body also updated wording in its bylaws to ensure the group’s compliance with labor law.

In April, representatives agreed to reduce what is currently a nine-member executive board to two vice presidents and a president in the body’s constitution — a change they voted on Monday to make to the bylaws as well. In response to the revision, representatives also voted to create a new leadership committee to elevate the roles of committee chairs who aren’t members of the executive committee.

Members also voted to add a Local and Civic Engagement Committee to the bylaws to support graduate student representation in meetings of the College Park City-University Partnership and the College Park City Council. Additionally, language regarding the objectives of the student affairs, academic affairs and diversity and inclusion committees was refined to make them less broad, GSG government affairs vice president Rachel Lamb said.

“[Previously] it was very hard for them to be able to focus on just a few things because it felt like the bylaws were mandating them to do everything,” Lamb said. “We actually adjusted the language and scope of their work … so that they [can have] the ability to focus on maybe one or two critical issues.”

While most articles passed with little or no debate, a clause regarding the voting power of the body’s parliamentarian generated some disagreement among members.

However, Yehuda Katz, the GSG’s current parliamentarian, motioned to strike the proposed language.

“No one has ever expressed concern that the parliamentarian was being arbitrary or unfair because of their opinion,” Katz said. “There are ways to deal with that. If you think that something wasn’t done properly you can appeal to the Governance Committee, but this seems unusual and unnecessary.”

Katz’s motion triggered a discussion that lasted for more than half of the two-hour meeting. At least two motions were brought to the floor regarding the clause before representatives decided to make the parliamentarian a non-voting, non-paid position.

Alec Dennis, a business and management representative, proposed an amendment to Katz’s motion that would only allow the parliamentarian to vote if the body wouldn’t otherwise make quorum.

But some representatives raised concerns about what it would mean for smaller programs if the parliamentarian position became a non-voting member. Historic preservation representative Veronica Martin, whose program only has four people, said it would not be fair to her department if she became a parliamentarian under those circumstances and were only allowed to vote in some cases.

“We vote on things as a collective to make a point,” she said. “That matters to us.”

One member suggested that departments be allowed to elect another representative if they lose one to the parliamentarian position, but library science representative K. Sarah Ostrach expressed doubts about this plan.

“It’s probably already hard enough to … get people to vote for a representative,” Ostrach said.

Katz also pointed out that a parliamentarian could still represent their department, even if they didn’t have full voting power. Being a representative isn’t just about voting, he said — it’s also about voicing opinions about matters under discussion. Under the proposed amendment to the clause, the parliamentarian would still be able to do that.

The amendment did not pass, with 19 votes against it.

For the revisions made to the constitution to become finalized, one-twentieth of the graduate student body must participate in a referendum and vote to approve them. As of Monday morning, only 22 more graduate students needed to vote for the changes to pass, GSG President Annie Rappeport said.

“Although it’s not passed this very moment, we anticipate meeting that threshold by mid-week,” Rappeport said. She added she would veto the revised bylaws if the constitution does not pass, although she said this likely would not be necessary.