UMD GSG agrees on changes to constitution, clarifying language and reshuffling exec board 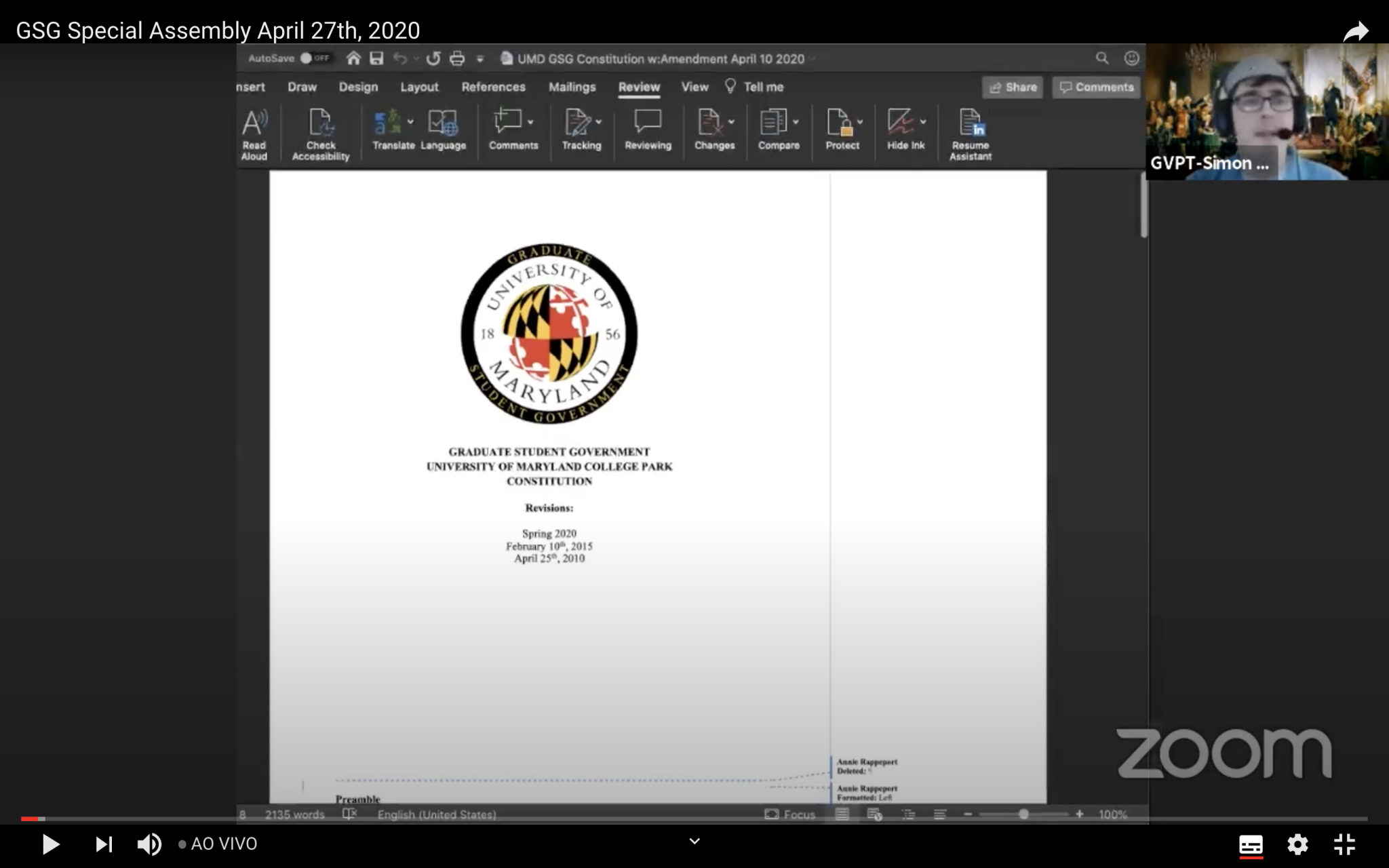 The University of Maryland’s GSG unanimously agreed upon changes to its constitution during a virtual special assembly Monday evening.

In a meeting that lasted almost two and a half hours, the Graduate Student Government worked through articles in the document to adjust clarity, correcting typos and adding details. The body is required to review its governing documents every five years, according to its constitution.

For the changes to become finalized, though, they will have to be voted upon by the graduate student body. The GSG will send out the updated document to graduate students Tuesday morning, said governmental affairs vice president Rachel Lamb, and students will have until May 10 to vote on the changes.

At least 1/20th of the graduate student body will need to vote on the changes — and a majority of voters will need to approve of them — for the new constitution to be affirmed, Lamb said.

Moments before the meeting adjourned, government and politics representative Simon Sheaff congratulated the governing body for approving the changes.

“You are now framers of the new GSG constitution,” he joked. “You are the founding fathers.”

Although the changes were mainly minor, representatives also agreed to a significant reshuffling of its executive office — an adjustment that was necessary to ensure the body’s compliance to tax and labor laws, Lamb said.

The duties now assigned to the remaining six vice presidents would be distributed among these two positions and the body’s director of operations, as well as among committee chairs, Lamb said.

Additionally, under the changes, vice presidents would be elected by representatives, rather than by the graduate student body.

In previous elections, most graduate students did not have the resources to make informed decisions about who would be the most qualified to fulfill the expectations associated with a certain role, Lamb said.

“We think it will actually increase the quality of the candidates and make sure that they’re vetted by the GSG-elected representatives who actually understand what are the duties or responsibilities that are required of these positions,” Lamb said.

Yehuda Katz, a representative for the computer science department, wanted to keep the document’s current language. He worried that the change, while it might seem semantic, would have repercussions for the way the GSG functions.

Laura McBride, a representative for the chemistry department, echoed Katz’s concerns. She asked if the change could affect the resources allocated to the governing body by reducing its membership from the entire graduate student body to representatives and members of the executive board.

But Alec Dennis, a business management representative who helped propose the changes, assured representatives that the alteration would not harm the group.

“There are a lot of other graduate student governments that have the language … that we’re proposing here,” Dennis said.

The process of changing the constitution may have been arduous, said Kioumars Haeri, the body’s student affairs vice president, but it was necessary.

“The changes that we have done, you know, helps to manage the organization a bit better,” Haeri said.