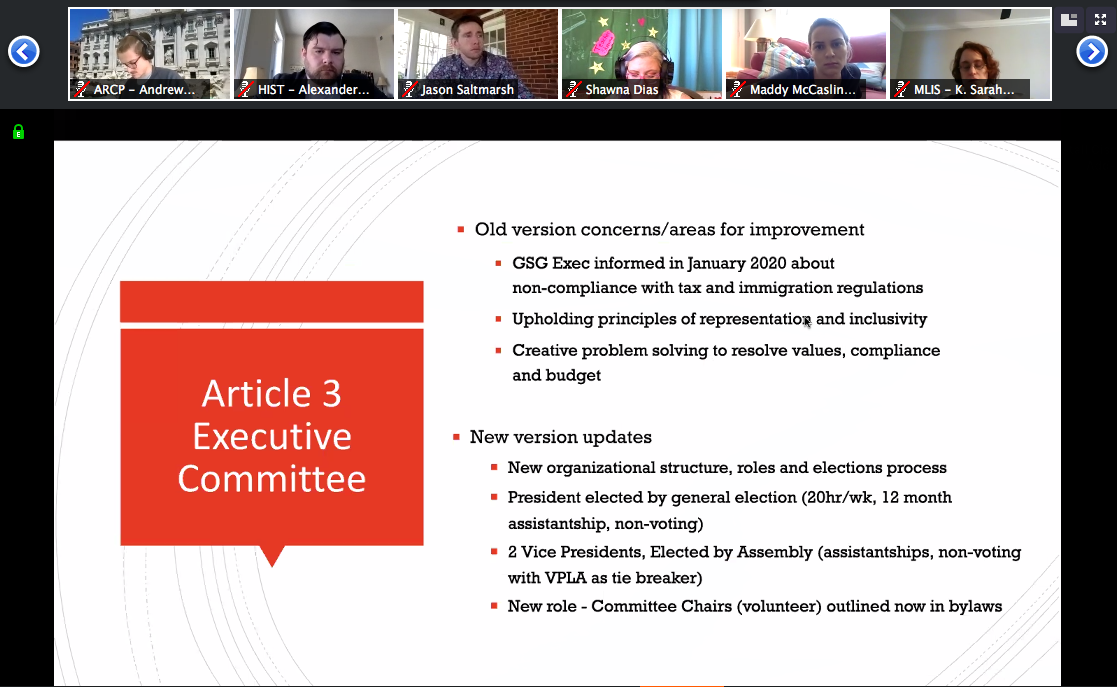 University of Maryland Graduate Student Government representatives discuss changes to the group's constitution and bylaws during an April 6 meeting held via Zoom. (Angela Roberts/For The Diamondback)

The University of Maryland’s GSG shared an update on efforts to review its constitution and bylaws during its first virtual meeting Monday, pitching a re-shuffling of its executive board to address tax issues raised earlier this year.

In January, University Human Resources reached out to the body after hitting a snag in attempting to process the payment of a vice president who was an international student. Students who are on F-1 visas are restricted from working more than 20 hours per week when school is in session, and this person also held a 20-hour-per-week assistantship.

This was the first time the Graduate Student Government had been made aware of such an issue, said Rachel Lamb, the governmental affairs vice president. Only some international students’ payments are processed on payroll — those categorized as “resident aliens” for tax purposes have their honoraria deposited directly into their student accounts at the end of each semester, alongside domestic students.

“So it was this very specific situation that suddenly flagged this,” Lamb said.

When the university’s human resources department took a closer look at how the GSG pays its executives, Lamb said it also announced the body should compensate everyone the same way — namely, all should be on payroll.

To rectify the department’s concerns, the committee charged with reviewing the GSG’s constitution and bylaws proposed transitioning the financial affairs and legislative affairs vice president positions into 10-hour-per-week assistantships. The remaining six vice president positions would become committee chairs, with some of their duties potentially distributed among the VPFA, VPLA and other staff members who are paid by the hour.

This would promote inclusion in the body by allowing international students who already have 20-hour assistantships to take on leadership roles, said Kioumars Haeri, the academic affairs vice president.

“If we do what we’re doing right now, for next year, no international student at all can be part of the executive committee,” Haeri said. “But if we change it to this new proposed way, now everybody who wants to be can be either a chair or be a vice president.”

Additionally, in order to make sure international students with assistantships are able to participate as chairs and representatives while continuing to meet the 20-hours-per-week limit, the committee said the group must also adjust language in its governing documents to clarify that all members — except for those who have assistantships — are working on a volunteer basis.

This suggestion raised concerns among some representatives, who pointed out that holding GSG members accountable could be tricky if they weren’t able to have any work expectations assigned to them.

By and large, Lamb said the body is still figuring out how to make its governing documents amenable to visa work restrictions while maintaining oversight on its members.

“It might mean that in the short term, we may choose to be more precautionary, and then explicitly charge a committee next year to go look at this again,” Lamb said. “Because obviously it affects our ability to govern well if we can’t have accountability.”

Another representative, Yehuda Katz, raised a concern that transitioning two vice president roles to assistantships might prove to be more exclusionary than inclusionary, as it would prevent graduate students who already have assistantships from taking on those positions.

President Annie Rappeport recognized Katz’s concern, but pointed out that domestic students working 20-hour-per-week assistantships can take on an additional 10-hours of work as overload — an opportunity international students do not have.

Furthermore, she added that in its research, the committee found 50 percent of international students do not have an assistantship. In creating two new assistantship positions, the GSG would be providing these students with more potential work opportunities, Rappeport said.

Discussion surrounding revisions to the constitution and bylaws are ongoing. Next, the group will be scheduling a special assembly to approve changes to its constitution, which must be voted on by the entire graduate student body before becoming official.