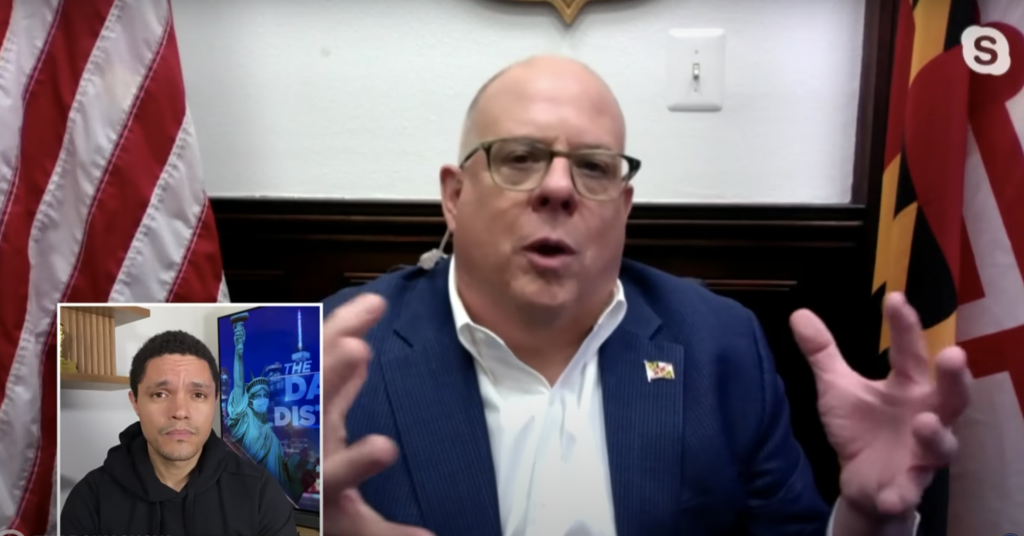 Gov. Larry Hogan during his appearance on 'The Daily Show.' (Photo via YouTube)

When I first saw Gov. Larry Hogan was set to appear on Trevor Noah’s The Daily Show, my curiosity was piqued. The Comedy Central show has invited plenty of big names on the now-virtual show, including Bill Gates and New York Gov. Andrew Cuomo. Now, our own Gov. Hogan was one of those names. I’ve never felt more proud to be a Marylander.

Noah currently films his show — now titled The Daily Social Distancing Show — from his couch in New York City, the epicenter of the COVID-19 outbreak. He’s usually in a hoodie, sitting down and talking to the camera like a friend would. I’ve really enjoyed his show, both before and after quarantine. Noah discusses coronavirus updates, politics and whatever sparing good news there is in his “A Ray of Sunshine” segment. I like the show because it delivers news in an engaging way, and it doesn’t hurt that Trevor Noah has an incredibly soothing voice to listen to.

Before Hogan’s appearance on Wednesday night’s program, the episode focused on the U.S.’s current food chain issues now that government orders have closed many restaurants and bars. They played a clip showing a brewing company forced to dump 900 gallons of craft beer down the drain.

“Right now, all over America, fraternity house flags are flying at half-mast,” Noah said. I laughed as I thought of College Park’s very own fraternities.

Later, Gov. Hogan — who’s been receiving national attention for his resourceful actions in combating the coronavirus outbreak — appeared to discuss current events. Noah asked Hogan about his public disagreements with President Trump over the handling of the federal response to the coronavirus. Hogan remained politically neutral throughout the show, emphasizing “the real enemy is the virus.” But he also showed he is not afraid to stand up when things aren’t going well.

Similar to Noah’s other virtual interviews, the conversation was fairly formal. The episode would’ve been more exciting if Hogan had better chances to crack jokes with Noah. The questions were engaging, but it was definitely down to business for the entirety of their discussion.

Throughout his chat with Noah, Hogan repeatedly highlighted his consultations with scientists — which reassured me the state of Maryland is putting health and safety before politics. I hope the governor continues to prioritize science and not be afraid to stand up for his citizens, setting an example for other governors to follow as well.

[Read more: Why is the internet so obsessed with Timothée Chalamet?]

Another talking point was the 500,000 coronavirus tests Maryland received from South Korea. Governors were essentially on their own to find tests, Hogan said, so his wife, Yumi Hogan — who was born in South Korea — helped him negotiate with the South Korean government to get testing kits. This was a big win for Maryland. Hogan gave a thank you and shoutout to his wife, which was very cute.

Like I said, Hogan carefully emphasized COVID-19 as the common enemy throughout the show. It was refreshing to hear a message of unity, but I would’ve liked Noah to try and get some more juice out of him. Hogan’s answers to his questions were generally things we’ve already heard on the news.

Between Noah’s calming voice and Hogan’s level-headed approach to the coronavirus crisis, for the first time in a while, I felt confident about the future. This is a sad and messy time for everyone, but sometimes it’s important to remember there are a lot of smart people out there working to do the right thing. Hogan’s appearance on The Daily Social Distancing Show made me hopeful, and I hope Trevor Noah continues to spread information and joy with his content.