Why is the internet so obsessed with Timothée Chalamet? 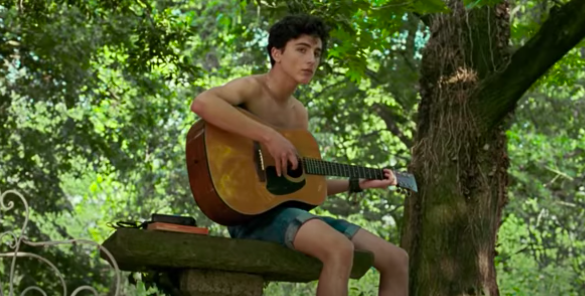 "Call Me By Your Name" star Timothée Chalamet continues to be unreasonably handsome in a new TikTok trend. (Photo via YouTube)

But in all honesty, Timothée Chalamet can make anything look sexy, whether it’s playing the piano shirtless, awkwardly speaking some broken French or even groovy dancing somewhere in the middle of northern Italy.

Ever since I watched Call Me by Your Name three years ago in a damp, crowded dorm room, I’ve had the fattest crush on the now 24-year-old actor. It seems as though I’m not alone with my infatuation.

Timothée Chalamet has become a modern-day Adonis. He certainly has the strong facial features — the oddly appealing bicycle seat-shaped face due to his insanely sharp jawline, piercing green eyes and a perfect mop of brown curls that only heightens his overall beauty. His hair is probably his most interesting physical feature, and I’m astounded that his crazy mop doesn’t make him look anything like a rabid New York City subway rat.

And interestingly, what’s so alluring about Chalamet is not that he has racks of chiseled abs or bulging biceps akin to some Hollywood male stars. To put it simply, his allure doesn’t stem from hypersexualized macho male stereotypes. Instead, it comes from preexisting Caucasian beauty standards that seamlessly intertwine gender-bending norms and feminine beauty qualities.

Chalamet can effortlessly rock a floral suit, a baby pink blazer or some fuchsia trousers and still have the world begging for him to step on their necks. In particular, the aesthetic of the slow-motion TikToks best capture his ability to embrace a more feminine side of his character while still maintaining his masculinity. These TikToks perfectly encapsulate Chalamet’s sensuality, poise and slender grace. After all, he’s not hailed as a “skinny king” for no reason.

[Read more: Coping with heartbreak sucks a little extra during a pandemic]

Chalamet’s personality is just another pleasant additive to his entire beauty. His interviews — whether they’re in English or French — and online meet-and-greets display his down-to-earth nature and showcase his awkward yet authentic character. In one particular Q&A session with Call Me By Your Name costar Armie Hammer, Chalamet clumsily fell out of his chair and then managed to recover, his embarrassment painfully noticeable.

Not to mention there are also countless videos of “Timmy Tim,” the actor’s teen alias, dancing with saggy low pants and snapback hats during his LaGuardia High School days.

So at large, the mainstream appeal of Timothée Chalamet is mainly that he fits the perfect all-in-one package, offering his fans a nice balance between his suave persona and goofy charisma. Behind that intense smolder is actually just an incredibly talented actor who also happens to be just as painfully awkward as the rest of us.