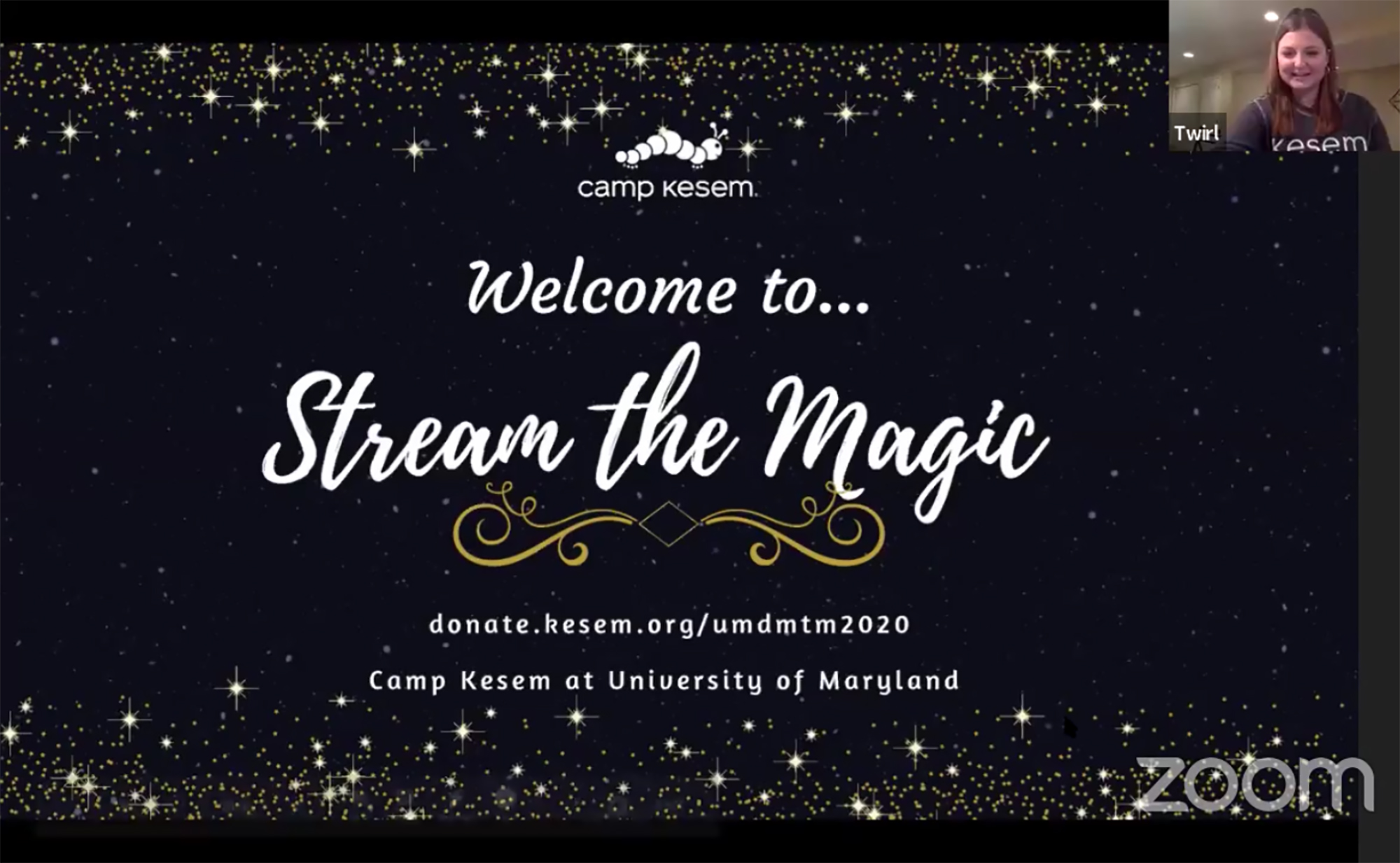 The University of Maryland's chapter of Camp Kesem held its first virtual gala over Zoom and Facebook Live on April 24, 2020. (Laine Napoli/For The Diamondback)

By Laine Napoli
For The Diamondback

When Camp Kesem canceled its annual in-person fundraising galas due to the coronavirus pandemic, the University of Maryland’s chapter decided that, for the first time ever, it would hold its gala online — shifting its focus from fundraising to bringing the Kesem community together.

Camp Kesem is a national nonprofit that holds an annual week-long sleep-away camp for children impacted by a parent or caregiver’s cancer and provides year-round support to the children and their families.

The gala — typically called Make the Magic, but this year dubbed Stream the Magic — normally includes a cocktail hour, speakers, catering and live entertainment, all serving as a fundraiser for the camp.

“It totally lived up to, … and honestly exceeded, all of our expectations,” said Kelsey Weissburg, a junior psychology major and co-director of this university’s chapter who goes by the name “Giggles” at Kesem activities.

Because the organization supports children affected by a parent or caregiver’s cancer, campers and volunteers go by “Kesem names” to abide by privacy laws that protect confidentiality in health records.

The goals of the event changed when it went virtual, said Alex “Doorbuster” Martinez, a senior American studies major and a co-coordinator of the event. “We’ve taken more of a backseat to getting donations, instead we’re looking to spread the message of Kesem and just get people engaged and involved in our mission.”

Stream the Magic was like nothing Camp Kesem had done before, said Zach Snelling, a Kesem official who works as the senior program director for the Northeast Region.

“Changing times require a little bit of change on our end too,” Snelling said of the nonprofit’s decision to allow chapters to host live virtual events. “But it’s really exciting because it affords us the opportunity to reach more people than an in-person event may have reached.”

The gala is normally adults-only, said Rachel “Twirl” Schrier, a sophomore philosophy major and co-coordinator of the event. But the virtual version meant campers were able to attend, she said.

Snelling said he was excited to see campers and alumni across different states participate — a way of being together while “maintaining social distancing.”

When the event started, the chat section on Zoom flooded with positive messages.

Throughout the night, the stream included comedy, music, a magic show, interactive games and a group lip sync, as well as speeches from a camper and a camper’s parent.

Although fundraising was not the main focus of the event, according to Weissburg, the chapter has well surpassed their fundraising goal of over $5,000. The final total has yet to be announced, Weissburg said, as fundraising remains open through the end of this week.

The organization is incredibly important to Logan Dechter, another co-director of this university’s chapter whose Kesem name is “French Toast.”

“Kesem has absolutely changed my life,” he said. “I am my best self when I am my Kesem self.”

According to the senior psychology and Spanish major, holding the virtual gala despite the ongoing pandemic upheld the organization’s mission as a whole: to support Camp Kesem kids, “even in the darkest of times.”

There’s a Kesem saying, Dechter said: “No matter where you are … in the world, you can always look up at the same sky and the same stars and the same moon and recognize that there are people who understand your situation and who care about you.”