How rebroadcasts of old MLB games keep me sane 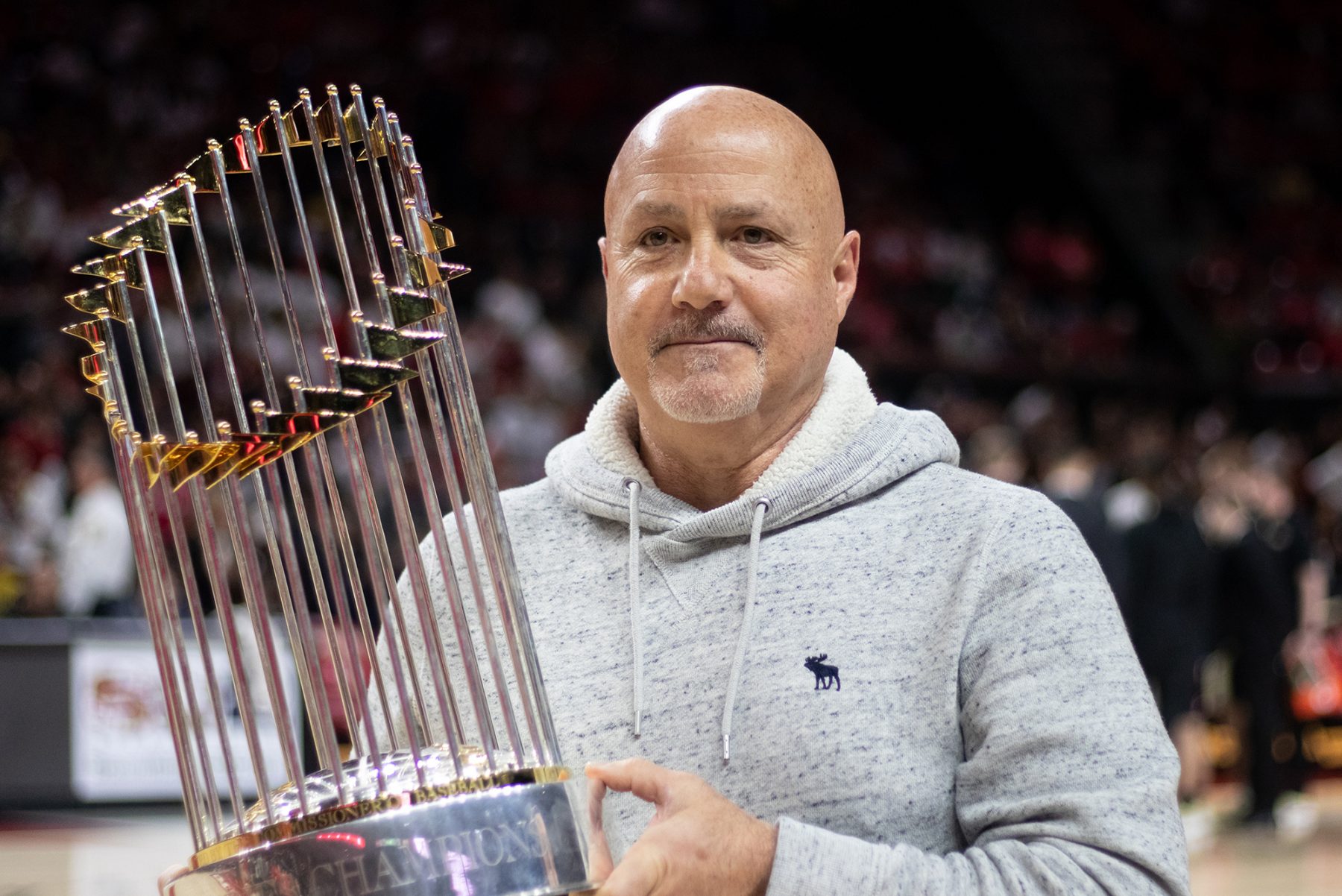 Mike Rizzo, the general manager of the Washington Nationals, parades the World Series trophy during the halftime of Maryland men's basketball's 57-50 win over Purdue on Jan. 18, 2020 in Xfinity Center. (Julia Nikhinson/The Diamondback)

It’s 1 a.m. Everyone else in the Golsen household is in bed, resting for the upcoming virtual workday. Since my “workday” consists of dispassionate Zoom calls and writing Diamondback articles turned in as close to the deadline as possible, I’m wide awake, scrolling through cable and wondering what’s on. There are some late night shows, syndicated sitcoms (including my usual go to, Friends) and oddball programs like CNBC’s Jay Leno’s Garage and GAC’s Going RV. Hardly inspired fare.

And then I land on a curiosity: a program entitled Nationals Classic airing on MASN for an audience of what can only be insomniacs and irresponsible night owls like myself. As a huge Nats fan, I decided to tune in.

The game was a 2005 day game at Wrigley Field against the Chicago Cubs. For context: the 2005 Nats were the dictionary definition of a bog-standard MLB team. In their first year, the future ‘Natinals’ went exactly 81-81 — a perfect .500 season. As an expansion franchise, the Nats were an amalgamation of leftover Montreal Expos and mid-level talent from around the league. It was a hodge-podge team with zero expectations and almost no immediate fan base, since Washington-area baseball fans had mostly absconded over to Baltimore to cheer on the Orioles in the 30-plus years between the Senators’ exit and the Nationals’ founding.

[Read More: Did we just see the last episode of ‘Last Week Tonight’?]

On the opposite end were the Cubs, a club notorious for their long history of sucking. Ever since they didn’t let that damn billy goat into the stadium, the Cubs had been experiencing various levels of mediocrity for nearly a full century until they finally won the world series in 2016, 98 seasons after their last title. 2005 wasn’t anything to write home about — the Cubs would end with a 79-83 record, 4th in the NL central and way outside any playoff contention. The Nats were much the same: 5th in the NL East and ending their first season with more of a thud than a significant dent.

So it’s two losing teams in July, a month that pretty much sealed both teams’ fates as doomed squads for that year. And yet, the stands are full for the strangest form of modern entertainment — baseball.

For one thing, it’s slow. Even though measures to ensure the game moves at a slightly less glacial pace have been implemented in recent years, baseball will always be a patient game. It will always be described in unhurried and slightly pretentious ways by the faithful who love it that way. This night’s broadcast is no exception. The most exciting play is an infield pop fly that drops, so the unfortunate Nats runner at second gets thrown out. Camera shots repeatedly flash over to a kid eating his ice cream in a sloppy manner. This is the treasured, laborious, cool-and-calm baseball that is hated by fairweather fans and loved by the faithful.

I could be watching so much else right now. My precious Friends reruns are showing episodes from the fifth season, which is my favorite. Elsewhere, everything from professional bowling to Team America: World Police promises a more immediate form of entertainment. And yet I stay on the Nats classic. Why?

Because it’s pure baseball fan service. These are unedited, played in full, old bat-and-ball games. Yeah, the Nats suck. That doesn’t matter. I’ve suffered through a bunch of mediocre Nats seasons, so watching one not only feels appropriate — it feels oddly comforting, too. More importantly, it’s an opportunity to experience one of the simple pleasures that have been stripped from us in the time of COVID-19.

Right now, there is no such thing as baseball. The Nationals won the World Series only a few months ago, and nothing would give me more joy than to have watched opening day on TV — seeing that World Series banner raised and my beloved Sandlot-like misfits fight through 15 years of questionable lineups and odd configurations to finally defend their honor as world champions. Since I am deprived of that joy — and the joy of watching my favorite sport on a daily basis — I have to find new ways to get my MLB fix.

And the only alternative is to look to the past. Kudos to MASN for recognizing that the best format to fix that itch is to show games in full, without any modern obstructions or distractions. It’s remarkably effective.

Finding the right entertainment to keep you occupied is important right now. Otherwise, you’re going to go crazy. Some have embraced Netflix, others turn to books and old video games. Me? I’ve committed to watching as many old Nats games as I can. It makes me feel like, someday, we’ll be able to enjoy those simple things again. Until then, I’ll be in front of the TV, waiting for three hours of old-fashioned baseball broadcasts.