Charli XCX is spending her quarantine making a new album 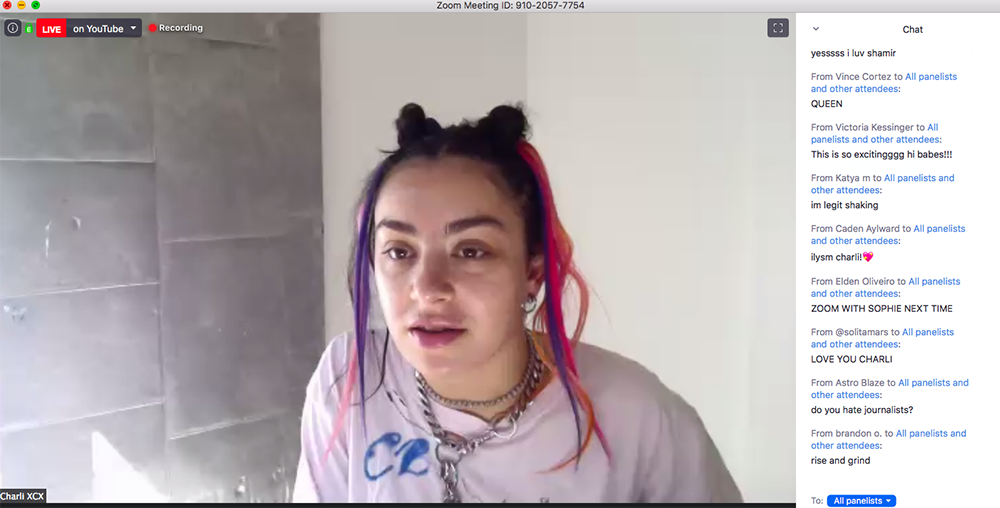 Charli XCX has taken to Zoom to talk to her fans about her new album. (Jason Fontelieu/For The Diamondback)

While there are many things in this life that I love, there are only a few things I’ll always say yes to. Among other things: a sale on laptop stickers, a new season of RuPaul’s Drag Race, an opportunity to explain why milk chocolate is simply so much better than dark chocolate.

And yes, also on that list is a new Charli XCX album.

Luckily enough, I’m not going to have to wait long for one. While some of us are spending our time in quarantine avoiding Zoom classes and losing stability in all facets of existence, Charli is spending her time making a brand new album.

Although she’s months out from her last release, Charli, she’s already begun work on a new album, How I’m Feeling Now. And she’s giving her fans an unfiltered look at her process.

Charli announced the album April 6 and discussed in a video on Twitter her plans for the album: how it would by “DIY,” as much of it would be created with whatever resources she had; how it would be “indicative” of the current times; how she’d be posting frequent updates, including demos, a cappellas and suggestions for “beats or references.”

“For me, staying positive goes hand in hand with being creative,” she said.

[Read more: Review: ‘The Bachelor Presents: Listen to Your Heart’ is the stable chaos we need]

The album, due May 15, is already well underway, and Charli has tweeted a bevy of updates for thirsty fans to sink their quarantined fangs into.

Hilariously enough, Charli has hosted Zoom calls to discuss album updates with her fans and ask about their opinions, which sounds exponentially more interesting than my Zooms for my class on Marxism and post-Marxism. Unfortunately, the call seemed to max out at 1,000 participants.

The first single off HIFN, “forever,” dropped April 9, just a few short days after the album announcement. But in those few days, Charli managed to tweet out the song’s instrumentals, lyrics ideas and various pictures to choose from for the album artwork.

The final product is a mellow, electro-pop banger tinged with chaos — quintessential Charli goodness. The lyrics are a catchy, succinct display of the insane amalgam of emotions that being in quarantine has thrown us into: “We won’t see each other (We won’t see each other)/ Cold just like December/ But I will always love you (Love you)/ I’ll love you forever.”

Midday Thursday — while I was writing this very article! — Charli tweeted that she was preparing to drop another Zoom code to discuss the album in about 10 minutes. I checked the time stamp: four minutes ago.

As soon as the code dropped, I copied, pasted and hopped right into the Zoom room to see Charli eagerly awaiting to chat with some fans.

Within seconds, the Zoom capacity had been reached, and the chat was flooded with hundreds of her crazed fans, nicknamed “Angels.”

She gave a few updates on the album: the music video for “forever” is supposed to drop Friday, and the next single, “Claws,” is due out by the end of the next week. She chatted with a number of guests, including Nadya from Pussy Riot and Philadelphia-based artist Shamir.

Charli also discussed potentials for touring this album, which she had admittedly not thought much about, and what it was like to record at home for the first time since she was 14.

She then signed off the 30-minute-long-ish call with her classic line: “it’s Charli, baby.”

While Charli has never been my number-one favorite artist, something about her has always kept me intrigued. She’s not afraid to try new things and experiment with her music — and she’s not shy about letting her fans know exactly what she feels.

With the creation of this album, we’re getting a more intimate look at her life than ever, as she’s showing us her musical process at a time where many of us are at our most vulnerable and unrefined.

And the fact that Charli is willing to bare her soul to us at this moment in history is magnanimous and not typical of your usual big-named artists. But the last word I’d ever use to describe Charli XCX is “typical.”