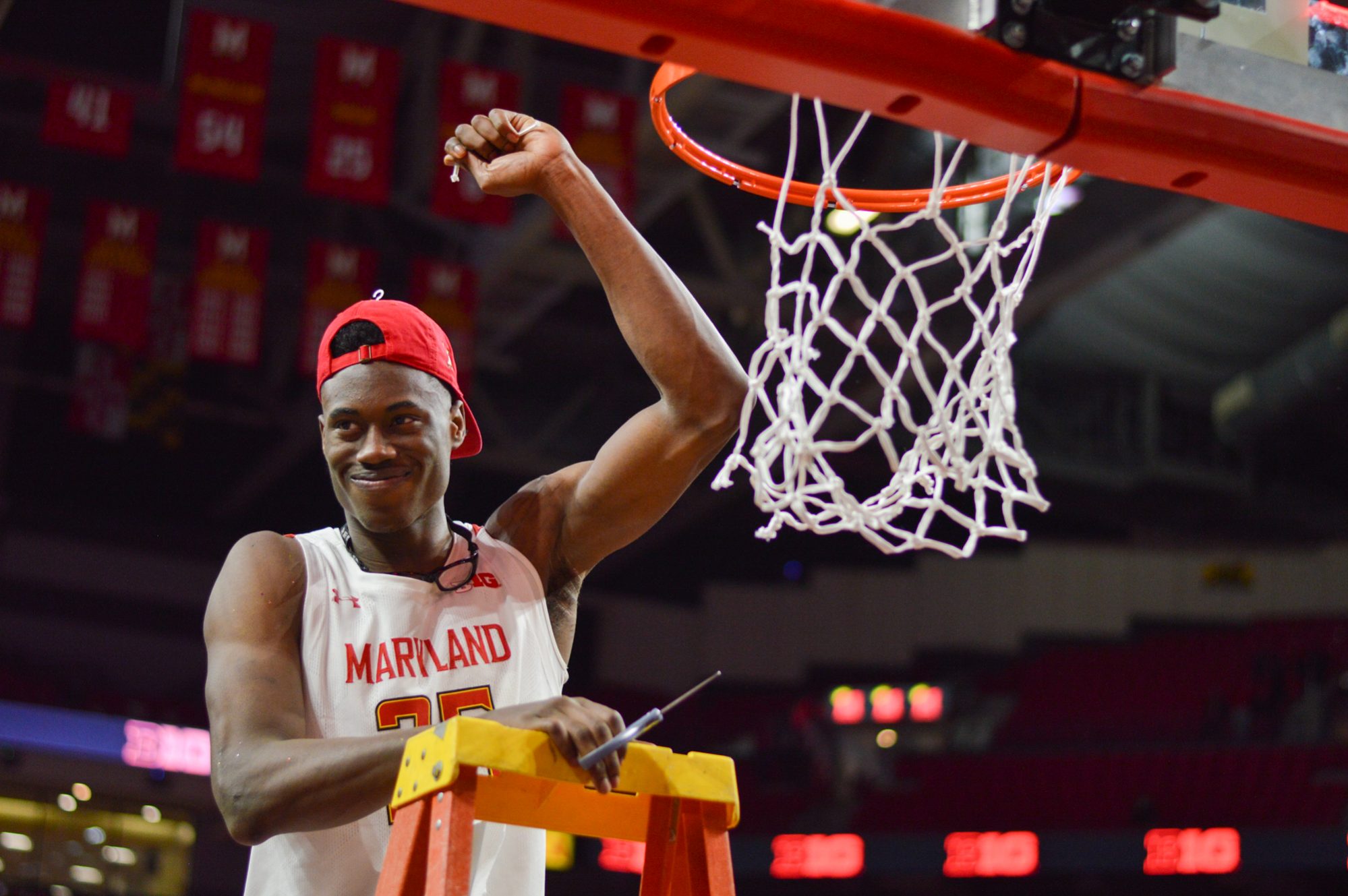 After two memorable seasons with Maryland basketball, Jalen Smith is headed to the NBA. Stix came in as a highly-touted McDonald’s All-American and left as an All-Big Ten and All-American selection.

He will be remembered for many different moments in a Maryland uniform, but here are some of his best.

Maryland had gotten out to a hot start to begin the 2018-19 season, and Nebraska was an early-season surprise, jumping up to No. 24 in the AP Poll, the first time the Huskers were ranked in some years. With future Dallas Maverick Isaiah Roby down low, it looked like the Terps might be in trouble at Xfinity Center trailing 39-35 at halftime and battling a deficit in the second half. However, they found a way to keep the score close, coming down the court with a chance to earn a ranked win with less than 10 seconds left. It was the freshman Smith who made his presence known, driving down the lane, putting up a floater to give Maryland a 74-72 lead with 3.8 seconds left and the eventual win.

JALEN SMITH HAS ICE IN HIS VEINS pic.twitter.com/FRx2Cc5IPD

The freshman was still relatively unknown by the conference and the rest of the country as the focus was more on Bruno Fernando, but Stix continuously made his case known as an up-and-coming star in the college game. In Maryland’s regular-season finale against the Golden Gophers, the Terps were up big in the second half on their way to a statement win to finish up the season. Minnesota forward Jordan Murphy tried to shift the momentum of the game just before the under-8 media timeout, but Smith swatted his dunk attempt away with relative ease to the delight of the Xfinity Center crowd.

This is when the entire country found out who Smith was, and it all came from one play, a scrum at the end of Maryland’s opening-round game in the NCAA Tournament v. No. 11 seed Belmont. With just over a minute left in the second half, Nick Muscynski blocked Bruno Fernando’s shot. The ball went up for grabs and after the recovery from Darryll Morsell, he passed it to an open Smith down low, who threw down a poster dunk over Dylan Windler, Belmont’s leading scorer in the game. Windler, an eventual first-round pick in the 2019 NBA Draft by the Cleveland Cavaliers, put up 35 on the Terps, but he was on the wrong end of Smith’s poster, arguably the defining moment of his Maryland career. Maryland would go on to win 79-77 on their way to the Round of 32.

The Terps and Tigers battled it out for a chance to go to the Sweet 16 in Washington D.C. of all places, a de facto home game for Maryland. Down nine at the half and double-digits in the second half, a change to zone defense proved to be crucial as Maryland stormed back, taking the lead late against LSU. However, the lead quickly turned into a three-point deficit with under a minute left, forcing Maryland into a three-now position. Smith, who was shooting under 30 percent from beyond the arc on the season, turned on his clutch gene again, nailing a three in the corner with seconds remaining. Unfortunately, LSU drew up a last-second play as Tremont Waters glided past Stix for a game-winning layup. The last image of him that Maryland fans would see that season was him crying on Bruno Fernando’s shoulders, but it would change for the better in 2019-20.

With 18:14 left in the second half, Maryland was down 14 to a struggling Northwestern team in Evanston, Illinois. The starters had a combined 10 points in the half, with Smith having the only made basket. He had four points and two rebounds in the first half, but in the second half, everything changed. Smith scored 21 points and picked up nine rebounds on his way to a career-high 25 points against the Wildcats, finishing with a double-double as he recorded 11 rebounds too. He jump-started a Terps team that was struggling on the road headed into that game, having gone 0-4 in true road games until that point. Maryland out-scored Northwestern 51-26 in the second half, winning 77-66 for its first road win of the year and Smith was the reason why.

Maryland was down 76-70 with 1:23 left at Assembly Hall in Bloomington, Indiana in front of a packed house of raucous Hoosiers fans. The Terps, who had fallen to No. 17 in the AP Poll, looked down and out, but a quick layup for Smith, a deflection and an Aaron Wiggins three cut Indiana’s lead to 76-75 with 55.5 seconds on the clock. An empty possession for Indiana on the other end put the ball in Maryland’s hands to take the lead. Anthony Cowan Jr. saw a cutting Smith down low, who picked up his dribble and scored in the paint to give Maryland a 77-76 lead with 14.5 seconds left. Indiana had more than a good chance to win the game on their end of the floor, but a missed shot down low allowed Maryland to escape with the one-point victory.

SMITH FOR THE LEAD pic.twitter.com/f3xuK0Fx7S

This game looked all but over, as Nebraska, the worst team in the Big Ten, came to Xfinity Center as the Terps were riding a six-game winning streak. As most Maryland fans know, there is usually at least one letdown game a season, but for the first 30 minutes, it didn’t look like that as Maryland was up comfortably by double-digits, looking well on its way to an easy win. The Terps took Nebraska lightly, and it showed down the stretch as the Huskers came down the floor in the dying moments of the game with a chance to upset Maryland, then No. 9 in the country. They nearly did, as Cam Mack drove down the lane with under five seconds left for his game-winner attempt. Smith was there too, swatting the ball away and securing the rebound to secure the win for Maryland, 72-70.

In what would be his final game in a Maryland uniform, Smith gave Maryland fans a game to remember, putting up his final double-double of the season, with 18 points and 11 rebounds. Smith also added four blocks on the day, but aside from helping Maryland win its first ever Big Ten regular-season title and finishing with a 24-7 record, he hit a shot that will stay in the minds of many Terps fans moving forward. As time expired in the first half, Stix had the ball in his hands, and pulled up from well beyond the three-point arc, nailing his only three-pointer of the game to give Maryland a 41-28 lead at halftime. He rocked his air guitar at midcourt in celebration as Maryland would win 83-70.

Whoever ends up picking Smith in this year’s draft, buckle up. It’s gonna be a fun ride.