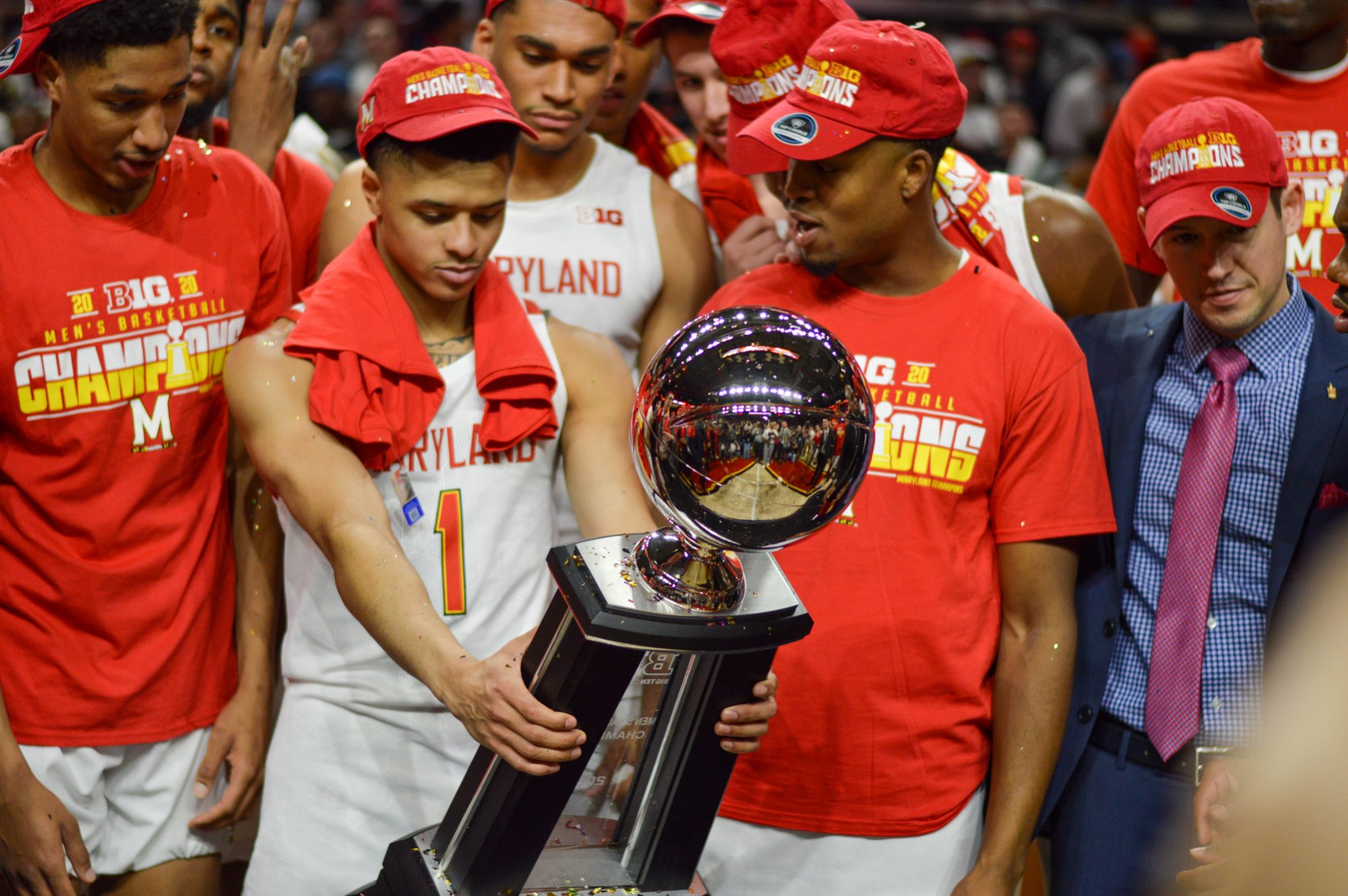 When Anthony Cowan Jr. walked off the Xfinity Center court for the final time on March 8 into the awaiting arms of head coach Mark Turgeon, it marked the culmination of his rise to become a Maryland basketball legend.

While Cowan anticipated leading Maryland into the 2020 NCAA Tournament, the COVID-19 pandemic snatched those dreams and abruptly ended his college career. Nevertheless, in Cowan’s four years at Maryland, he made plenty of memories that fans will never forget.

Here’s a look at the ten greatest moments of Anthony Cowan Jr.’s career at Maryland.

Maryland fans showed Cowan plenty of appreciation during his four years on the court. Yet, it was an off-court moment earlier this season that really showed the connection between Cowan and Terp fans. During the taping of College Gameday, Cowan walked onto the Xfinity Center court rocking a Len Bias jersey. When the crowd of students noticed Cowan, he was showered with raucous applause. While that night’s game against Michigan State didn’t go Maryland’s way, Terp fans were left with a great memory from the day that morning.

With Melo Trimble going pro after the 2017 season, Cowan became entrenched as the lead guard in his sophomore season. The Terps were off to a 2-0 start when they faced Butler in the Gavitt Tipoff Games. It was against the Bulldogs where Cowan put up his first career double-double, notching 25 points, 10 assists and five rebounds to help lead the Terps to a 79-65 win.

Yes, Cowan shot 3-18 against Belmont in the first round of the 2019 NCAA Tournament and he was not the Terp who posterized Dylan Windler nor the Terp who secured the game-winning steal. Yet, Cowan hit a game-tying three-pointer with four minutes left and then hit a free throw with just over a minute left to give Maryland a four-point lead. While Cowan wasn’t the game’s MVP, he made some valuable contributions to give Maryland their first NCAA Tournament victory in three seasons.

The Terps held a 21-point led with under 19 minutes to play against Wisconsin. Incredulously, the Terps blew that lead and trailed in the final minute. With 44 seconds and the Terps down a point, Cowan drilled a go-ahead three-pointer to give Maryland a lead they wouldn’t relinquish. The Terps held on to win 64-60.

In Maryland’s first home game after students returned from winter break, the packed Xfinity Center crowd anticipated a battle between two of the best big men in the country in Jalen Smith and Iowa’s Luka Garza. Instead, it was Cowan who stole the show as he put up a career-high 31 points, along with six rebounds and six assists to lead Maryland to an important conference win.

In Cowan’s second career collegiate game, he was thrust into the spotlight against Georgetown at Capital One Arena. Maryland was down five points with 19 seconds left before Cowan stepped to the free throw line. He nailed two free throws, Georgetown promptly turned the ball over one second later and then Cowan hit two more free throws to cut the deficit to one. While Melo Trimble would score the go-ahead points, Maryland wouldn’t have been in that position without Cowan.

After a 5-0 start this past season, Maryland headed to Disney World to headline the Orlando Invitational. It was here where Cowan scored 30 points against Temple, had 20 points and 5 assists against Harvard and then thoroughly outplayed Marquette’s All-American Markus Howard en route to winning the tournament’s MVP award.

The Terps trailed by 15 points against Illinois in the second half of the Big Ten opener but cut the deficit down to three points with under 30 seconds left. Then, Cowan pulled off the most incredible 30-second sequence of the season for Maryland. Cowan received a pass from Jalen Smith and promptly nailed a game-tying three-pointer with 19 seconds remaining from nearly 30 feet away. Then, he stole the ball and was fouled with 2.1 seconds left. After hitting his first free throw, he intentionally missed the second one to secure the 59-58 victory.

In a back-and-forth game that would prove to be pivotal in the Big Ten title race, Cowan saved Maryland from a devastating loss in East Lansing. He hit three three-pointers, and scored the final 11 points of the contest, in the final 2:26 to take Maryland from a four-point deficit to what ultimately became a seven-point victory in front of a national television audience.

BEST PLAYER IN THE COUNTRY pic.twitter.com/sr1jtbz6TW

When Anrthony Cowan Jr. took the floor for his senior day in Maryland’s season finale against Michigan, it ultimately marked the last time that fans would get to see him wear the No. 1 Maryland jersey. Fittingly, Cowan put the team on his back as he played all 40 minutes, scoring 20 points and dishing out 8 assists as Maryland defeated Michigan 83-70 and clinched a share of the Big Ten Title for the first time in school history. As he left the court, he embraced Coach Mark Turgeon in a hug that Maryland fans will remember forever.