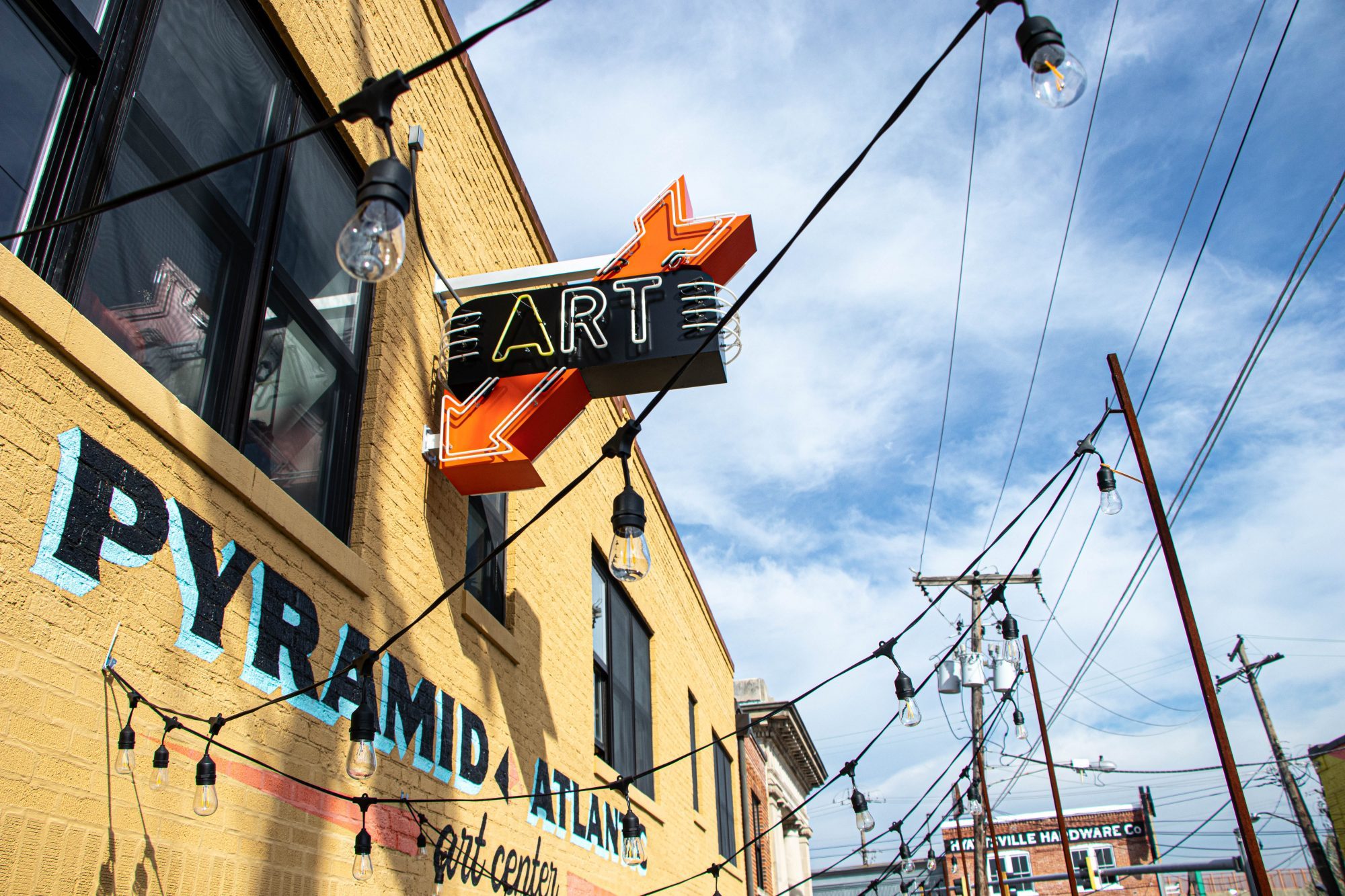 Across from the site of MilkBoy ArtHouse, before many current students can remember, a slim white building with a green gable roof used to stand in downtown College Park. It was there when President Harry Truman announced the end of World War II in 1945, when Neil Armstrong landed on the moon in 1969 and when Steve Jobs first presented the iPhone in 2007.

But today, the “Little Tavern” exists only in memories, photographs and on a 34-inch-tall, 44-inch-wide canvas. Using an oil-based paint, University Park resident Joel Floyd captured the building’s “last gasps” — its overgrown exterior and vacant interior — before it was demolished in 2016.

The painting — along with Floyd’s other depictions of old, dilapidated buildings along the Route 1 corridor — is part of a project titled “Roadside’s Last Gasps.” And before the coronavirus outbreak shut down Maryland Milestones, a tourist information center in Hyattsville, the exhibit was on display: Floyd’s tribute to what he sees as the disappearing character of a constantly changing area.

First unveiled in February, Floyd’s paintings were scheduled to be on display until April 30. He’d also been scheduled to give a presentation on his inspirations for the project on April 16 — something that’s now unlikely to happen, at least in-person. Still, Floyd is happy he at least got to share his collection with the public for a month.

He also doesn’t intend to stop his artwork anytime soon — he even has plans for developing a website to display fine art.

Floyd’s latest collection consists of realist paintings portraying several old restaurants and motels along Route 1, including the old Quality Inn, which was demolished in 2019 for a mixed-use apartment building, and the Starlight Inn, which was located where the Enclave now sits. Almost all of the paintings depict elements of decay — weeds and plants overtaking dilapidated, architecturally anachronistic buildings.

“The character comes from the vernacular architecture that people built from the ground up on an individual basis, not by big developers,” he said. “Right now, the character is high-rise student housing … It’s very cookie cutter, and not that interesting.”

Maryland Milestones executive director Aaron Marcavitch — author of US Route 1: Baltimore to Washington, DC, which explores the history of Route 1 and its surrounding communities and neighborhoods — noted that roadside buildings are generally overlooked and forgotten. That’s why documenting their histories is important, he said.

Marcavitch said Floyd’s painting of the Little Tavern in College Park evokes a feeling of being “forgotten and left behind.”

“This was a building that was overgrown, the sign was torn out, but you can still see the interesting roadside structure behind it,” Marcavitch said. “And that probably speaks to that ‘last gasp,’ the last moments just before its death.”

The death of the Little Tavern and other old College Park motels, such as the Quality Inn or Starlight Inn, is a “microcosm” of a national trend, a former University of Maryland graduate student wrote in her 2014 thesis. Throughout the 20th century, chains replaced local businesses along highways.

“Due to evolving middle-class sensibilities, tourists came to expect certain amenities. They came to value predictability and standardization rather than character,” the alumna, Meredith A. Gorres, wrote. “Motels, due to the influence of referral chains, franchises, and company-owned chains, evolved into highway hotels.”

In her thesis, Gorres advocated for the preservation of motels that are no longer standing through “creative methods of interpretation,” such as driving tours, brochures, apps or websites.

University Park resident Roger Edsall, who has lived in the area since 1969, said he used to go to some of the places painted by Floyd, including the old Terrapin Taco House and the Little Tavern. Edsall visited the exhibit before it closed, and noted that he enjoyed Floyd’s style and theme.

The growth of this university has contributed to that progress, Marcavitch said.

“There’s a lot of pressure to change and adapt and give students a really great experience,” Marcavitch said. “One of the benefits of a chain … is that you know what to expect. And whenever you’re dealing with students who are coming from all over the state and the world, they like to know those things are where they can find them at home.”

Over the years, Floyd collected postcards of roadside architecture throughout history. When he moved to the area from Arizona about 18 years ago, he began photographing old diners and motels. And after he retired, he had more time on his hands to paint these subjects.

Floyd intermittently completed each of the paintings for his most recent collection in his basement — not an ideal studio, he admitted, but a place he can “make a mess.” He started working on the first piece in 2012, and just finished the final painting in October.

Floyd previously worked in the U.S. Department of Agriculture, and has had some of his scientific illustrations published in journals and displayed in exhibits over the years. He said his background in science has influenced his latest collection, since painting his subjects — whether it be an insect or an overgrown building — requires an attention to detail.

“Many of [the buildings], you can see, are deteriorating. They’re becoming overtaken by weeds and that sort of thing,” said Floyd. “The plants that I draw, you can recognize them as certain species. They’re not just foliage.”

Before the coronavirus outbreak hit Maryland, Maryland Milestones held an opening for Floyd’s gallery in February. While the tourist center was still open, the paintings were for sale, with prices ranging from $975 to $2,800.

Still, Floyd said he doesn’t make art for marketing purposes — he’s just glad to get his artwork out to the public. At the opening, he said he heard from people who grew up in the area and remembered when the buildings were still standing.

“If it does bring back some nostalgia or appreciation of history, that would be great,” he said of his collection.