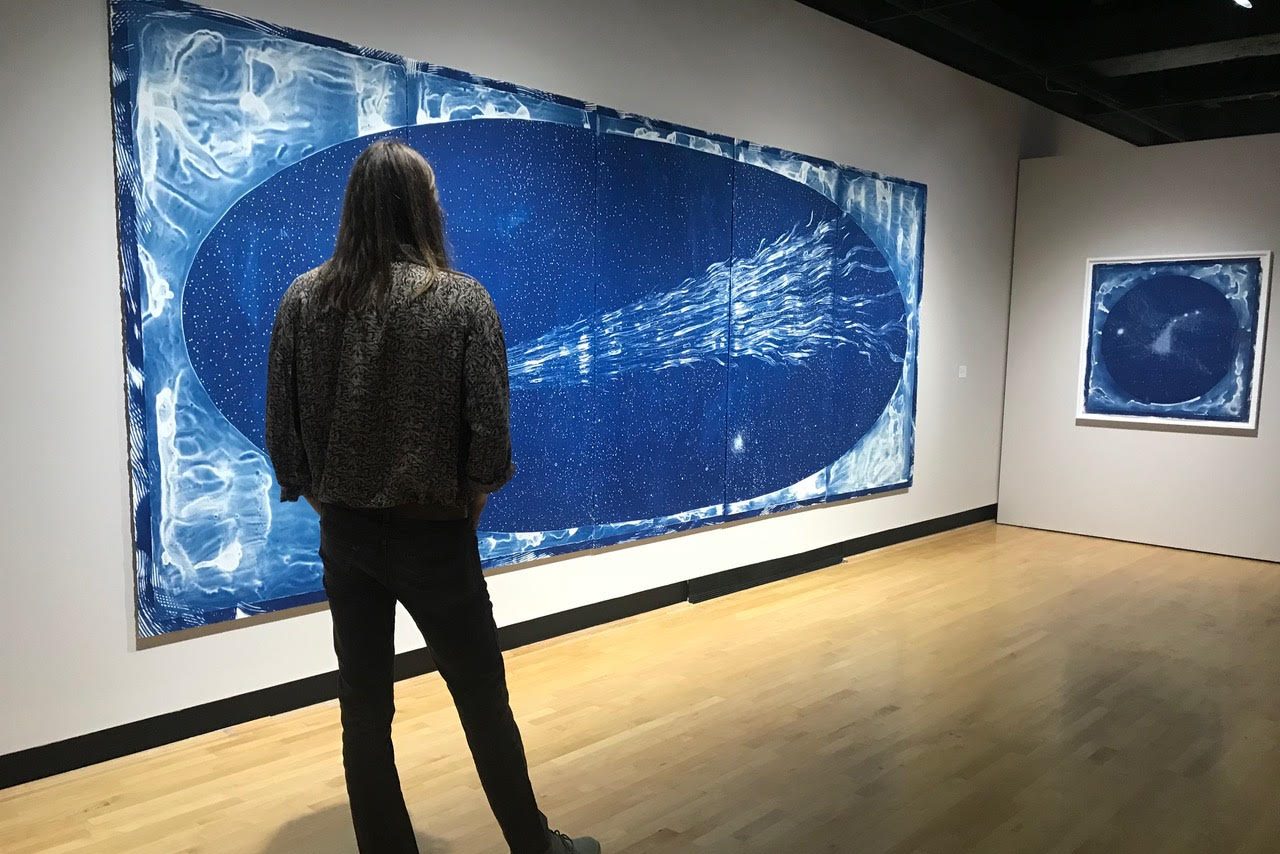 An attendee at ‘The Same Sky Overarches Us All’ opening reception observes a cyanotype piece entitled 'The Great Comet' on Wednesday, September 4, 2019 in the Art-Sociology Building (Morgan Pravato/For The Diamondback).

With sweeps of blue and white, painter and photographer Lia Halloran explores the often overlooked accomplishments and progression of women astronomers through her exhibition The Same Sky Overarches Us All. Curated by Taras Matla, acting director of the University of Maryland’s Art Gallery, the exhibit is beautiful — and it has an admirable purpose.

“Everyone’s promoting gender equality… this is a good place to portray female accomplishments,” said Victoria Hernandez, a senior art and communication major who works in the art gallery.

Appropriately, the gallery is using its programmatic year to acknowledge and celebrate the accomplishments of women in the arts as well, Matla said.

The beautiful blue and white hues that cover the exhibition space were produced through cyanotypes, mid-19th-century photographic printing process typically used in science and that Halloran used to create all of her framed pieces.

Space is perplexing to humans, and many of Halloran’s works play with the concept of wonder through mild optical illusions. In Conference, Halloran forms the faces and silhouettes of human bodies from blue colors splayed against a white background. There are few hints to make the sexes of these people obvious — it can be assumed they are women, but they are artfully disguised.

For an exhibition dedicated to the work of other women, Conference is only one of two pieces that show actual people. The Sun Portraits are a series of silhouettes of women’s bodies. Their forms are created through gradients that melt from dark blue on the border to white inside the shapes. The bodies appear to be moving through the white space that surrounds them, maybe jumping or falling.

Halloran focuses on the accomplishments of female astronomers by showing celestial bodies in her work more than actual people. Continuing with her figurative approach, Halloran seems to tie the progression of women in space (and society) to the motif of physical movement and flight.

The swirls of galaxies and circular shapes of planets guide the viewer’s eye. White dot “stars” are present in the background of most pieces and complement the movement, especially in the piece Comet. The comet shoots down a direct pathway, with matter radiating from the central body and blending into the “star” dots of the background.

Besides the striking colors and movement, the gallery’s space is filled with a pulsation that radiates from the back speakers. Observers feel it as soon as they enter and move closer to its source as they progress through the exhibition. They eventually move through a black curtain to find Halloran’s first three-screen video installation, Double Horizon.

While her prints are impressive, Double Horizon (2019) is where the exhibition really shines. In the beginning, the camera is placed directly over the shoulder of Halloran as she flies above Los Angeles. The angle — and the use of three screens — immediately translates the feeling of being in a cramped space.

This is her most successful optical illusion. Onlookers can watch as she explores the space above Los Angeles through this flight — and Halloran flips her aerial footage of the city, with the mirror images placed above the bird’s eye view. This “sandwiches” the worlds together to create a new, visually-satisfying landscape. The two horizons move toward and away from each other, sometimes overlapping and distorting the images in an expert way.

Double Horizon slowly accelerates, and the speed changes are enough to make viewers feel a bit of motion sickness. Halloran’s choice to use three screens enhances this effect in an engaging way.

“If you do something someone’s already done it’s not as … rewarding,” said Holly Myers, a freshman animal sciences major.

Not only does Halloran shine in her unique visual choices in Double Horizon and otherwise, but her homage to women in science is admirable, especially given how rare that appreciation is.

LIA HALLORAN: The Same Sky Overarches Us All will run until Nov. 22.