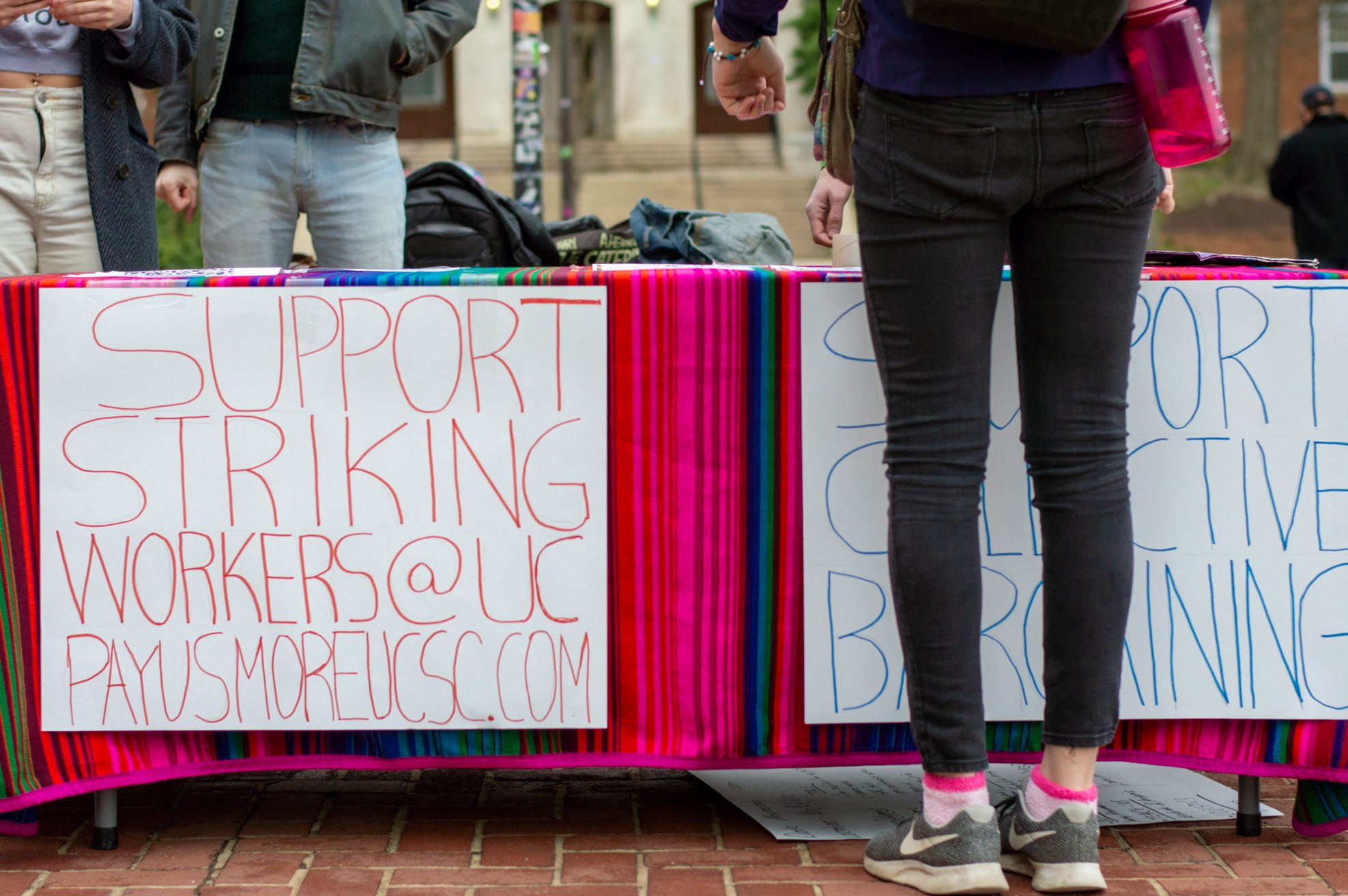 A student stands in front of a graduate student protest for collective bargaining and unionization on McKeldin Mall on March 11, 2020. (Joe Ryan/The Diamondback)

Even as a slight chill picked up under a gloomy sky outside of the University of Maryland’s McKeldin Library Wednesday afternoon, a group of graduate students stood gathered around a folding table that was covered in a brightly colored table cloth.

Lively music thrummed from behind them as they chatted with passersby, describing the fraught situation facing graduate student workers at the University of California, Santa Cruz. Earlier this month, administrators fired over 70 teaching assistants for failing to turn in their students’ fall quarter grades as part of a drawn-out strike over a requested cost of living adjustment.

In a letter to campus last month, UCSC’s interim provost defended the action, writing that the students had failed to “meet their contractual obligations.”

“[W]e cannot again jeopardize our undergraduates’ education or put them in a position where they may not have the teaching resources they need to succeed throughout the spring quarter,” wrote Lori Kletzer, the interim campus provost and executive vice chancellor.

The struggle that prompted graduate assistants at Santa Cruz to mobilize — a gap between their paychecks and the rent they pay — also ensnares graduate student workers at this university, the group told students and faculty who stopped to talk.

That’s what they were up to that afternoon, said Cara Snyder, a post-doctoral student at the school’s Latin American Studies Center: educating the campus community on a labor movement that’s spreading across the country.

“This is a national problem, clearly,” she said. “Graduate students are being exploited everywhere, and it’s not okay. And a lot of them are standing up and saying it’s not okay.”

Currently, the minimum stipend afforded to graduate students with 9 ½-month assistantships is about half the salary MIT’s Living Wage Calculator lists for a single adult in Prince George’s County.

And, since unionizing is prohibited for graduate student workers in Maryland and graduate assistants at this university don’t have contracts with their supervisors, they instead engage with administrators over workplace issues in a process called “meet-and-confer” — which only results in non-binding agreements.

While these discussions have produced some victories for graduate students — including increases to the minimum stipend and the creation of a grievance policy — the group charged with leading them has found them less than fruitful.

These issues, and others, are why graduate student workers at this university are pushing for collective bargaining rights, fiercely supporting two bills that are currently making their way through the state legislature. It’s not the first time such legislation is coming before lawmakers — over the past two decades, representatives have heard 14 bills that would legalize unionization for graduate assistants. Most never made it out of committee.

The university’s graduate school and the University System of Maryland stand firm in their opposition to the proposed legislation. Graduate school Dean Steve Fetter and a system representative made the trip to Annapolis to testify against both the Senate and the House bill, arguing that the meet-and-confer process already provides a sufficient avenue through which administrators can address graduate student concerns.

Fetter has also raised concerns that should graduate student workers unionize and win stipend increases, and state funding to the university doesn’t increase in kind, departments could have to provide fewer assistantships.

At the bill’s Senate hearing, though, Senate Finance Committee chair Delores Kelley challenged Fetter and the system representative with pointed questions. Still, she expressed doubt that the bill would make it out of committee that year — remarks that surprised activists, especially because the senator had signed on to the bill as a co-sponsor.

They haven’t lost hope, though. On Wednesday, the graduate students gathered outside of McKeldin encouraged people to call up Kelley’s office to tell her staffers why the bill is important to them.

“We’re trying to galvanize support to kind of demonstrate to her that there’s kind of a collective will for this bill — we need it, we want it and we don’t want to wait any longer,” said American studies doctoral student Adelaida Shelley.

Students also welcomed passersby to visit the GoFundMe page created to support the striking graduate employees in Santa Cruz. As of Wednesday night the fundraiser had raised $270,000 — just $30,000 away from its goal.

Students estimated that about 25 people gave Kelley’s office a call in the hour they were posted by the mall.

Jonathan Brower, a history doctoral student, was one of them. He’s been a graduate student at this university for eight years, and has been involved in fighting for collective bargaining rights since the beginning.

Although Brower is currently being supported by a fellowship, he’s previously worked as a teaching assistant in the history department. Since coming to this university, Brower said he’s faced financial difficulties — both when he was living off of an assistantship stipend, and living off of fellowship funding now. He’s had to borrow from friends and make other sacrifices to make ends meet, he said.

If graduate employees could unionize, he said, they’d gain leverage over administrators and be able to negotiate for higher stipends.

“Some graduate students work two jobs to survive. Then that impacts our own progress toward degree, and it creates this vicious cycle,” he said. “So, if we were paid more, then we wouldn’t have to do all this extra stuff and we could make progress toward a degree and get out of here.” 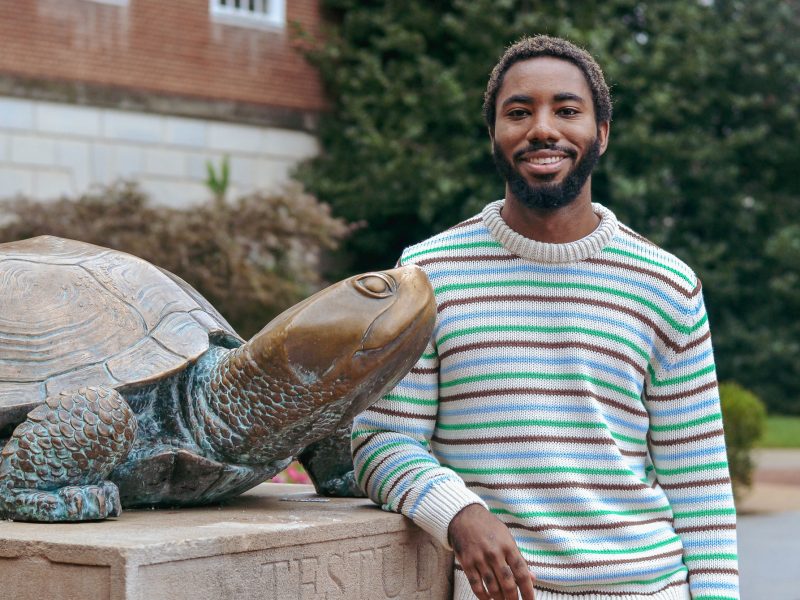