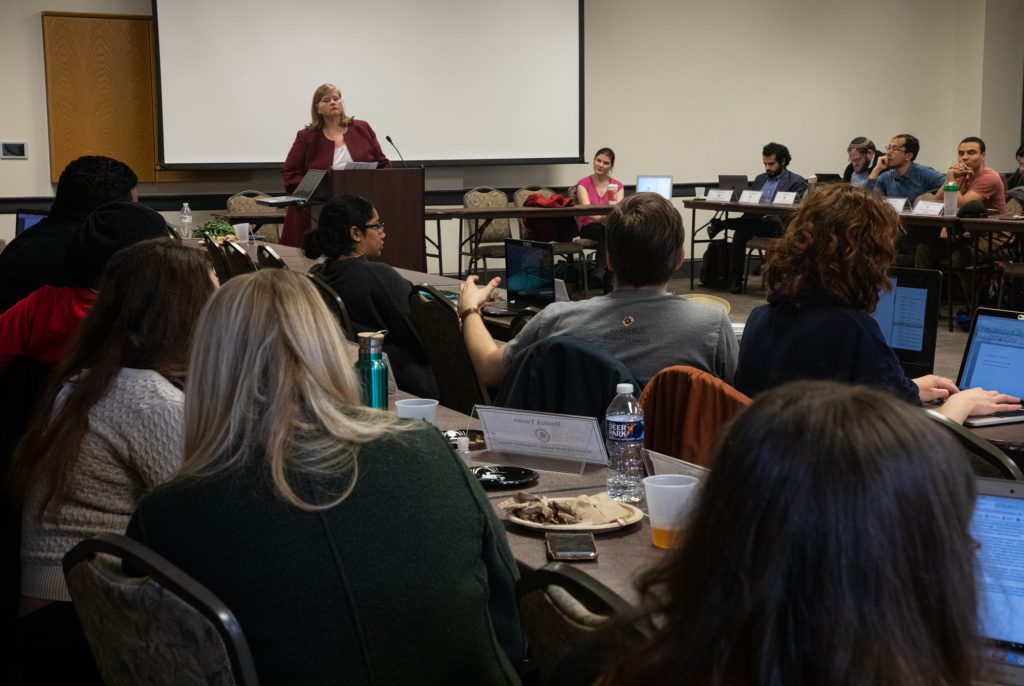 When GSG representative Sofia Maurette was sworn in last month, she had her baby on her hip.

Maurette’s seven-month-old son — and his two big sisters — sometimes join her at meetings at the University of Maryland’s Spanish department, where she is a doctoral student. So far, every faculty member she’s encountered has been helpful and flexible — willing to bend a deadline to allow her to care for a sick child, or welcome a few younger guests to a presentation.

Still, she worries for parents and guardians who are hesitant to ask for accommodations.

“People are very flexible, and if you ask for things, they will probably give it to you,” said Maurette during a phone interview, her son babbling in the background. “The thing is, there’s nothing official.”

So, at Tuesday’s Graduate Student Government meeting, Maurette moved to change this. She’s authored a resolution that would call upon the graduate school and provost’s office to encourage professors to add a statement to their syllabi showing support for students who are pregnant, parents or guardians.

While representatives supported the resolution’s core purpose, there was some debate about its phrasing.

As originally proposed, the resolution included an example statement professors could include in their syllabi, which acknowledged that parents may need to bring their kids to class should they face childcare constraints or other issues. The sample statement also promised to discuss potential accommodations to assist parents, guardians and pregnant students in completing course requirements.

Alexander Dennis, a business and management representative, raised concerns about children joining their parents in class. This could create distractions or even safety concerns in environments such as chemistry labs, he said.

Furthermore, Dennis said, suggesting professors welcome their students to bring their children to class could lead some faculty to bypass including a statement in their syllabi entirely.

“It might get professors’ hackles up because they might view it as a bit of an extreme statement, and it might turn them off to the whole process,” he said.

Kristin Reque, a criminology and criminal justice representative, said she worked under a professor who had a similar statement in her syllabi, and parents very rarely brought their children to class — only in cases of emergencies.

Valerie Hall, a representative for the anthropology department, supported the statement.

“[My children are] teens now, but when they were young, I didn’t even want to go out to eat,” she said. “It’s not like we want to bring children into the classroom.”

Hall said including this kind of statement would help make students more comfortable about approaching their professors to ask about bringing their children to class.

In the end, an amendment Dennis proposed that would have adjusted the suggested syllabus statement failed. However, the body still voted to send the resolution back to the rules committee to further clarify its wording.

GSG President Annie Rappeport said the resolution will likely come up again at the next meeting, which is slated for March 9. If the resolution is passed, Rappeport said she and Maurette would then take its recommendations to the graduate school, the provost’s office and the Teaching and Learning Transformation Center, which hosts a syllabus template on its website.

This template was last updated during the fall semester, following a faculty member’s push to spread awareness for certain resources the university offers, including the Counseling Center and campus pantry.

Maurette said she decided to bring the resolution to the GSG after hearing over winter break about a similar statement a professor had included in their syllabus. She said she has been asking professors in the Spanish department to consider adding statements in support of parents, guardians and pregnant students to their own syllabi, but wanted to expand university-wide awareness for the initiative.

This is just her latest effort to advocate for students who are also parents and guardians. Last year, Maurette helped start a campus organization aiming to make life easier for those who balance caring for a family with pursuing a degree. The Facebook group for “UMD Students with Kids” currently has 59 members.

While Maurette noted some examples of the university addressing the needs of students who are parents — including establishing lactation rooms around the campus — she said encouraging professors to add the proposed statement to their syllabi would bolster visibility of families and their children.

“The university is advancing toward being more welcoming, and I feel like this could be a part of it,” she said.