Quiet off the court, Ashley Owusu and Stephanie Jones’ play made noise in Big Ten tourney 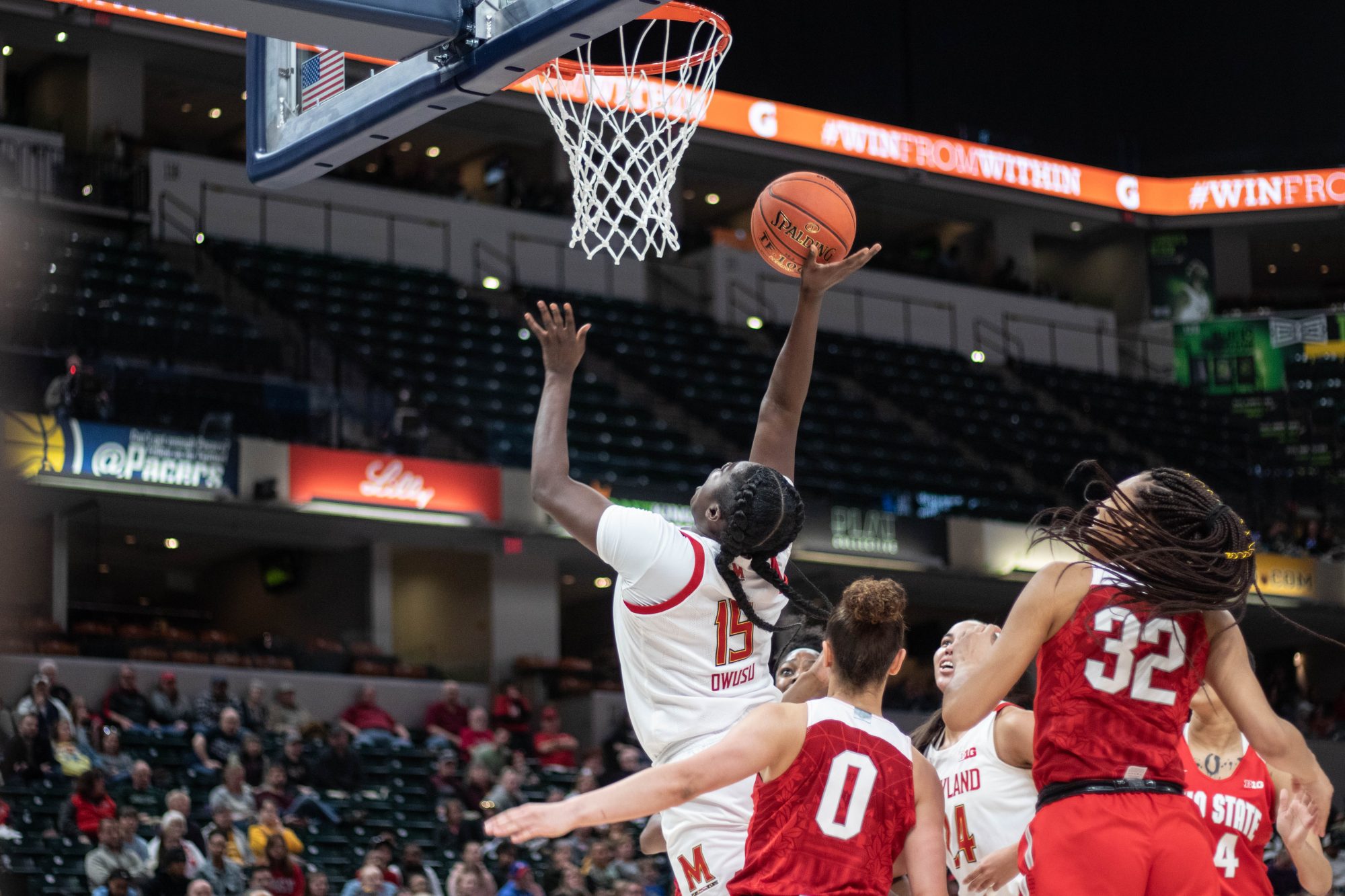 With confetti and streamers cascading down in the Bankers Life Fieldhouse arena Sunday, Maryland women’s basketball’s two most valuable players of the tournament celebrated the moment in their own ways.

When the buzzer sounded, guard Ashley Owusu and forward Stephanie Jones joined the group celebration with their teammates. Once the crowd formed, Jones quickly sought out her mother. They shared a warm embrace at center court, Jones smiling from ear-to-ear.

Meanwhile, Owusu was laughing and joking around with forward Shakira Austin and others. The freshman bashfully endured her teammates’ quips as she corralled yet another piece of hardware — this time, the tournament’s Most Outstanding Player award.

It was an apt scene, Owusu and Jones reveling in the joy of those closest to them. And while there is plenty different between the two Maryland stars — age, for instance — there is one thing that binds the two: selflessness.

“I thought the MVP could have went to either one,” coach Brenda Frese said.

Owusu — or ‘Cashley,’ as forward Kaila Charles calls her — played perhaps her finest basketball of the season in the tournament. Although most of the other Terps found success in spurts, Owusu was the steady hand her teammates looked to when all else failed.

The Woodbridge, Virginia, native averaged 15.3 points and eight assists on 46.2 percent shooting through the three games. But it was her poise that stood out — the moment never appeared to faze her. Instead, she rose to the occasion.

And on a team with vast postseason experience, it was Owusu who became the leader.

“She’s a floor general for our team,” guard Blair Watson said. “She’s honestly the quietest person you’ll ever meet, but I think her actions speaks volumes to what she’s capable of and what she does for our team. I’m just so proud of her, and she definitely deserved that award.”

It’s one thing to have one understated phenom. But to have two is a unique proposition, one that can strike fear in opponents, not through flurried scoring outbursts, but through steadiness.

And in Jones, Frese has a player who has brought that temperament over the course of her four years as a Terp.

Embodying the spirit of her nickname, ‘Ms. Consistency,’ the senior retreated to the background for the majority of her senior season. Whether she’d get the start or come off the bench, her productivity rarely dipped.

Toward the end of the season, something clicked for Jones and her play jumped to another level. Jones attributed her newfound success to her teammates putting her in the right spots, but her confidence and self-assurance were on display throughout the tournament. As a result, she averaged 13.6 points and 11.6 rebounds on 54.8 percent shooting in the tournament.

Maryland won each game of the tournament by pulling away in the third quarter, and Jones was a big reason why. On a multitude of occasions, when Frese’s squad couldn’t find its rhythm offensively, Jones would put together a quick six-point stretch — often complete with hard-fought rebounds — that’d give her team the cushion it needed to play loose.

“Steph was just doing Steph things,” Charles said. “She just went out there and played her hardest, left it all on the court, and it just was working for her … Steph played amazing.”

Both players are peaking at the right time for a Maryland bunch set on advancing past the second round of the NCAA tournament for the first time since 2017.

For Jones, it was continued aggressiveness, on offense and on the boards, where she recorded her first multi-game stretch of double-digit rebounds.

As for Owusu, the Big Ten tournament was all about leadership. Atypical of most freshmen, she seemed comfortable being the focal point on a Terps roster that features all-Big Ten talent like Austin and Charles.

Both players burst out of their shells to bring home a trophy that had eluded Maryland in back-to-back seasons. But even amidst the celebration, both reiterated that they still had their sights set on one more tournament run.

“[Owusu] was undaunted. No moment is too big for her. She was the engine that made us go,” Frese said. “[Jones] really brought it, I thought, every single game for us.”