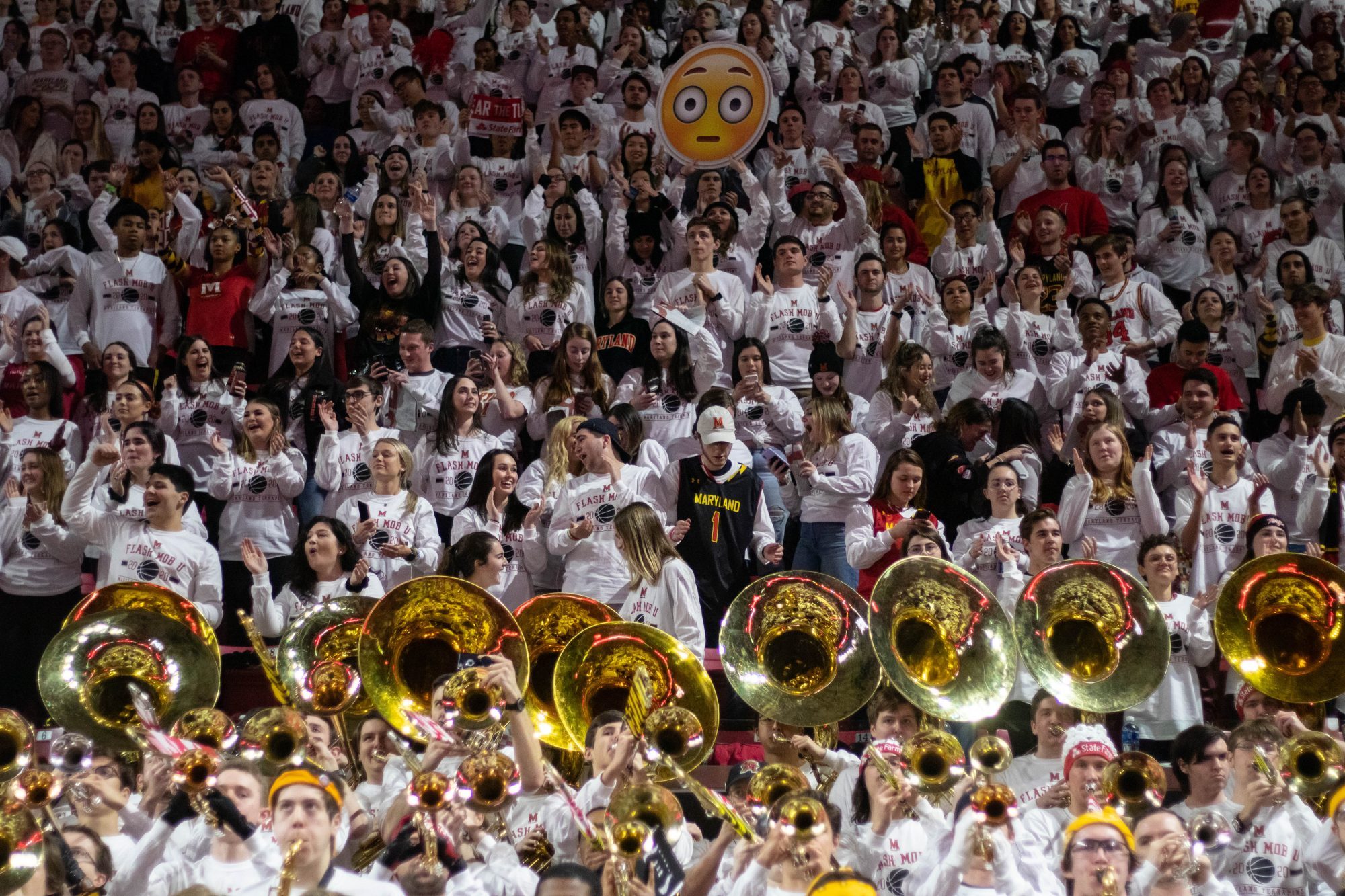 Maryland men's basketball fans filled the Xfinity Center for the game against Michigan State on Feb. 29, 2020. Maryland Athletics announced that spectators will no longer be allowed at sporting events through at least April 10. The Big Ten Conference banned fans from the men's basketball Big Ten tournament starting March 12 due to COVID-19 concerns. (Julia Nikhinson/The Diamondback)

As the University of Maryland adjusts its spring break schedule and shifts to online classes from March 30 to at least April 10, athletic events in College Park will also face disruption as a result of the coronavirus.

On Wednesday, Maryland Athletics announced all home games will be limited to essential personnel, officials, credentialed media members and a “limited number of family members” from competing teams will be allowed to attend those contests, until at least April 10.

The Maryland pep band and cheer team will not be at the Big Ten tournament, according to a team spokesperson.

The Big Ten also announced Wednesday night that the Big Ten tournament will be closed to fans beginning Thursday, one day after the competition began play at Bankers Life Fieldhouse in Indianapolis.

Maryland announced that practices and games — both home and away — will continue to occur for winter and spring sports. But out-of-season competitions, travel and practice will be canceled during the week of March 23.

“Every decision has been made with two overarching goals: Keeping our campus community healthy and preventing the further spread of the virus,” a statement read.

[Read more: No fans will be allowed at NCAA tournament games amid coronavirus concern]

There have been no confirmed cases of coronavirus on campus, according to an email the university sent Wednesday. But there have been nine cases confirmed in the state, and three of those are located in Prince George’s County.

The men’s basketball program will begin play in the Big Ten tournament on Friday — the first round of the tournament began Wednesday evening in Indianapolis — and fans will be restricted from attending games on Thursday and beyond.

A slew of conferences around the country have closed locker room access to media for their tournaments, including the ACC, Big East and SEC. But Mid-American Conference and Big West announced Tuesday no fans would be present at their tournaments, and the Ivy League went so far as to cancel its conference basketball tournaments and all spring sporting events.

And earlier Wednesday, NCAA president Mark Emmert wrote in a statement that March Madness games would be restricted to “only essential staff and limited family attendance.”

In a statement, the Big Ten announced all other winter and spring sport competitions conference-wide would be limited to essential staff, credentialed media and immediate family members on the participating teams.

For Maryland football, with its spring practices originally set to begin March 24, a team spokesperson confirmed those practices would have a delayed start “at a minimum” due to the athletic department canceling out-of-season events during the week of March 23.

The Terps were supposed to hold their Pro Day on March 25, and a team spokesperson wrote in a message that the program was still attempting to get clarity if the event could go on.

Other Maryland sporting events have been affected, as well. With the Ivy League’s decision to cancel spring sporting events, the women’s lacrosse team appears to have two holes on its schedule — it was supposed to play Penn on March 17 and Princeton on April 8.

In a release, Maryland also wrote that it would increase sanitization in locker rooms and on equipment, while also adding more hand sanitizer dispensers in athletic venues.