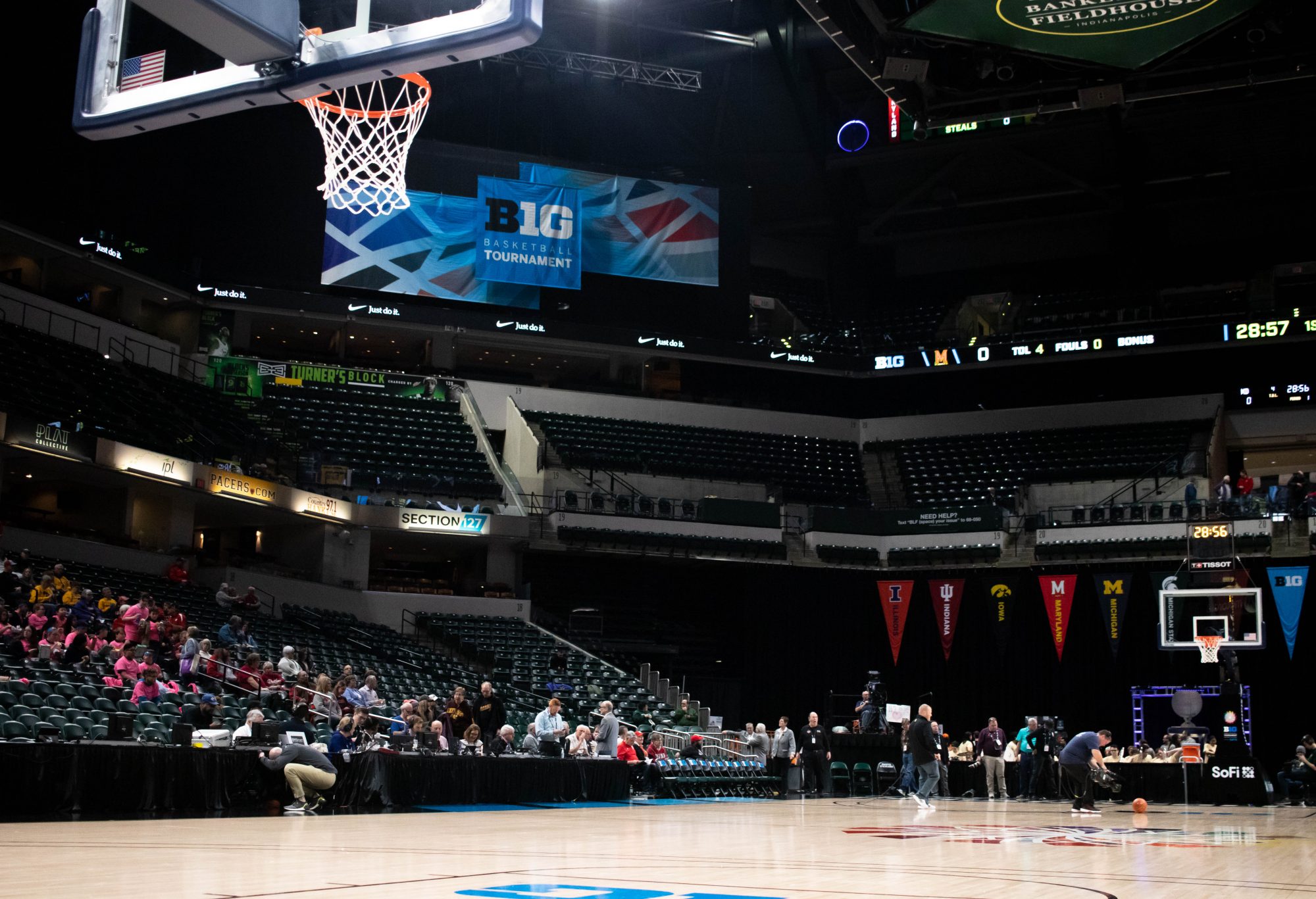 The Bankers Life Fieldhouse sits empty before the start of the Purdue vs. Maryland women's basketball game of the Big Ten tournament on March 6, 2020 in Indianapolis, IN. The NCAA announced that all upcoming NCAA tournament games will be closed to all non-essential personnel, including spectators, due to COVID-19 related concerns. (Julia Nikhinson/The Diamondback)

No fans will be allowed to attend NCAA men’s and women’s basketball tournament games in an effort to curtail the potential spread of coronavirus, NCAA president Mark Emmert said in a statement Wednesday. The statement read that “only essential staff and limited family attendance” will be permitted.

“While I understand how disappointing this is for all fans of our sports, my decision is based on the current understanding of how COVID-19 is progressing in the United States,” Emmert’s statement read. “This decision is in the best interest of public health, including that of coaches, administrators, fans and, most importantly, our student-athletes.”

The conference reversed course later Wednesday night, however,  announcing that fans would not be permitted to tournament games beginning Thursday — fans were present for Wednesday’s contests.

Wednesday evening, Maryland athletics announced fans would not be permitted to attend games on campus, either, although practices and contests will continue for winter and spring sports.

Asked Saturday for his thoughts on playing games without fans, Maryland men’s basketball coach Mark Turgeon said it was “out of his control.”

“Only think I can control is, I’ve got a really good team around me, you know, doctors and trainers,” Turgeon said. “I know the university is giving us daily reports, staying on top of it. I mean, sometimes we get two emails a day. So I can only follow what the leaders tell us to do, and right now I got a really good group around us. So we’ll cross that bridge when it comes.”

Spring sports are in full swing, and Maryland football’s spring practices have been pushed back a week at minimum, a team spokesperson wrote in a text message. Meanwhile, the Terps’ women’s lacrosse schedule appears as if it will need adjusting after the Ivy League’s decision to cancel all spring sporting events — Maryland was scheduled to play Penn on March 17 and Princeton on April 8.

A campuswide email Tuesday night signed by university President Wallace Loh announced the cancellation of classes during the week of March 23, and it instructed students to not return to school following spring break — which begins this weekend.

While dorms won’t open again until April 12, the Maryland men’s basketball team will begin play in the Big Ten tournament on Friday in Indianapolis, and first-round games started Wednesday at Bankers Life Fieldhouse.

Several conference tournaments have faced adjustments in the wake of the virus’ spread. The Ivy League opted to cancel its tournament altogether on Tuesday, and Wednesday they canceled all spring sport practices and competitions through the end of the academic year. The Big 12 are cutting back fan access at its conference tournament Thursday and beyond, too.

The Mid-American Conference and Big West both announced Tuesday their tournaments would go on without fans present. The Big East, ACC and SEC also announced fans would be allowed to attend their conference tournaments, but the locker rooms would be closed to the media postgame.

The coronavirus has forced sporting events abroad to adapt, too. The Premier League in England temporarily banned pre-match handshakes, and a bevy of professional soccer games across Europe — including Italy, Spain, Switzerland, Germany and France — have either been postponed or are slated to occur behind closed doors.

Closer to home, the state announced Tuesday night there are now nine confirmed coronavirus cases in Maryland, with three of those located in Prince George’s County. An email from the university said there have been no confirmed cases on campus as of 3:30 p.m. Wednesday.